After hanging out in port for a couple days, the Bigelow is now ship-shape (I will never apologize for puns) and spent yesterday steaming down to the first sample sites off of New Jersey.  Being on the midnight-noon watch, I was on hand when we hit the first station.  Of course, being one of the newbie volunteers, I snapped pictures like a ravenous tourist (kudos go out to fellow volunteer Mary who snapped some of the “at-work” photos while I was helping work up fish).  My own thesis sampling won’t start until we hit the North Carolina strata later this week, but aside from being part of how I earn my keep aboard the ship, these early tows are important for helping me get the rhythm down and know how to fit my own stuff in.

Pictures and play-by-play commentary below the jump.

The Bigelow runs its catch through a conveyor belt system from the deck into the wet lab.  The wet lab contains several sorting stations and three work stations with electronic fish boards and touch screens for data recording.  All in all, a pretty high-tech situation for someone used to getting by with a bunch of baskets and a couple wooden fish boards.  From the tows I participated in today, it all seems to work pretty efficiently (though I haven’t seen a true glut of fish yet). 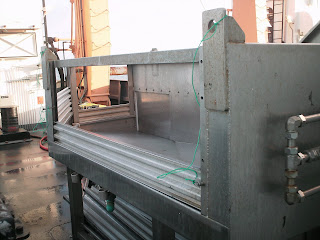 After being brought up in the net, the catch is deposited here… 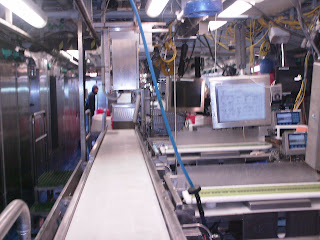 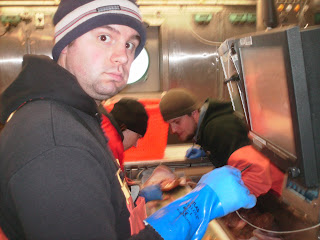 Some jerk entering data.  Really, who wears a hat in the wet lab? 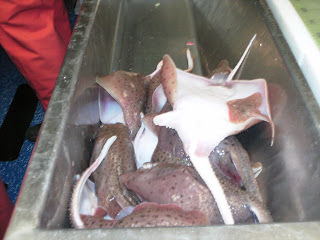 Skate-tastic!  This is actually an extremely small catch of skates.
Overall we didn’t catch much in the first four stations.  The most diverse by far was the first, which boasted winter and little skates, a few ocean pouts, lots of sea herring, a few species of small hake, a couple mackerel, some windowpane flounder, and a rare solo spiny dogfish (a large female over 90 cm in total length).  The rest of the hauls were dominated by little skates, and even then only included about two dozen tops.  This is apparently not uncommon for trawls off of New Jersey in February; even for fish this is off-season at the Jersey Shore.
At certain points it was actually possible to spot Atlantic City from the deck.  Try as I might, I couldn’t get my camera to focus enough to make out the casinos through the near-shore fog, even though the skyline was maddeningly obvious to the eye.  A camera upgrade might be in order soon.