One of the biggest challenges in conservation has been making the continued existence of a species or environment worth more than its value as food, real estate, or any other consumptive use.  Like it or not, some policymakers and populations will not  be convinced without some kind of economic argument.  This is why ecotourism has been embraced by the environmental community, and it has lead to some big successes with shark conservation.  It’s no coincidence that many of the nations with the strongest shark protection measures also have robust shark diving industries.  Now, it looks like that most reviled and disrespected of sharks is getting a shot at charming divers.

Big Fish Expeditions, a series of dive operations focusing on sharks and other charismatic marine megafauna run by shark photographer extraordinaire Andy Murch, is offering a dive off the coast of my home state of Rhode Island.  This dive includes two days with the blue sharks and shortfin makos that have been getting some attention off the coast of New England, and a previously untried subject of ecotourism, the spiny dogfish. 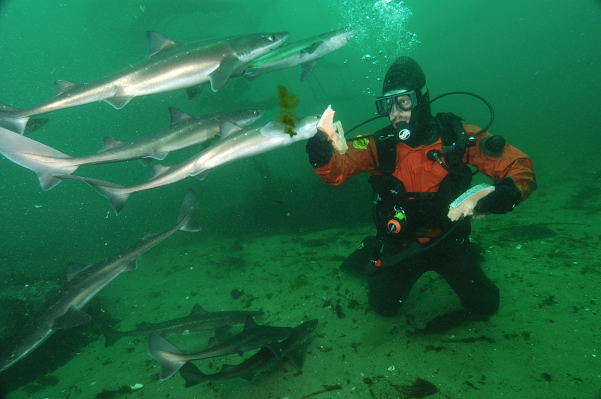 The next big thing in shark diving? Image by Andy Murch (elasmodiver.com).

According to the description of the trip, after two days free-diving in blue water with blues and makos, divers will be taken to an offshore wreck where, hopefully, hoards of spiny and smooth dogfish will be chummed in.  Unfortunately I can’t afford $975 and travel costs on a PhD stipend, otherwise I would already be signed up.  I could always use more diving in my life, and the idea of being surrounded by a massive school of tenacious little sharks strikes me as unbelievably awesome.  Hopefully other divers feel the same.

I’ve seen dogfish feeding and swarming from boats before, and from that I know these little guys can be pretty charismatic.  Could dogfish dives become a viable economic use of this species?  I suppose we’ll find out after the first dives this summer.