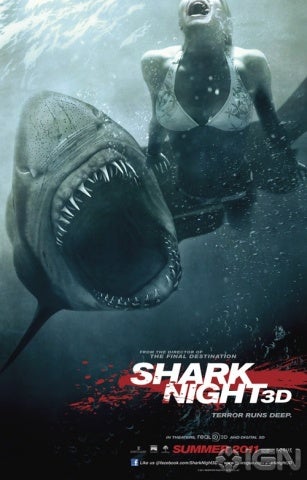 Quite the movie poster. Image from IGN.com.

I’m going to try to bridge my “wannabe shark expert” and “pop culture dork” sides tonight.  Last night I got the chance to check out Shark Night 3D, which has been getting a little bit of buzz as the first truly “big budget” shark attack movie since, well, Deep Blue Sea.  Now, as a budding scientist with an interest in shark conservation, the reaction I should be expected to have to this movie is probably one of “ugh, these movies are part of the problem, I’m not seeing it.”  However, I also genuinely enjoy shark attack movies for their entertainment value.  After all, Jaws may have created just about all the conservation problems sharks have these days, but I have yet to find, even among shark conservationists, anyone who can’t at least admit that it’s a very well-done and entertaining film.  I think we’d be fooling ourselves if we said that in some way this type of movie didn’t have something to do with us being interested in these animals in the first place.  So with that moment on the soapbox over, I’m going to attempt to review Shark Night 3D as both a shark researcher and someone who enjoys a cheeseball monster movie.

Shark Night 3D is directed by stuntman-turned-director David R. Ellis, who is also responsible for the cult-hit-before-it-was-even-released Snakes on a Plane, so he has cut his teeth on scary animal movies before.  Shark Night lacks the stunt casting of someone like Samual L. Jackson, with a cast of relative unknowns, the most recognizable of whom are lead Sara Paxton and “funny guy” Joel David Moore (who has made a career playing memorable supporting characters in everything from Avatar to Dodgeball).

Those looking for serious cinema will likely not bother seeing this movie in the first place.  The plot starts out as a pretty ho-hum “everybody party in a secluded location” set-up and gets pretty ridiculous (but still very predictable) from there.  The dialog is mostly made up of screaming and bits of exposition, with Joel David Moore’s character getting the only somewhat clever lines in the whole film.  Which is almost forgivable, because we already know that plot and acting are pretty much just a track to get these 20-somethings and a small assortment of local hillbillies into the water with the predators. 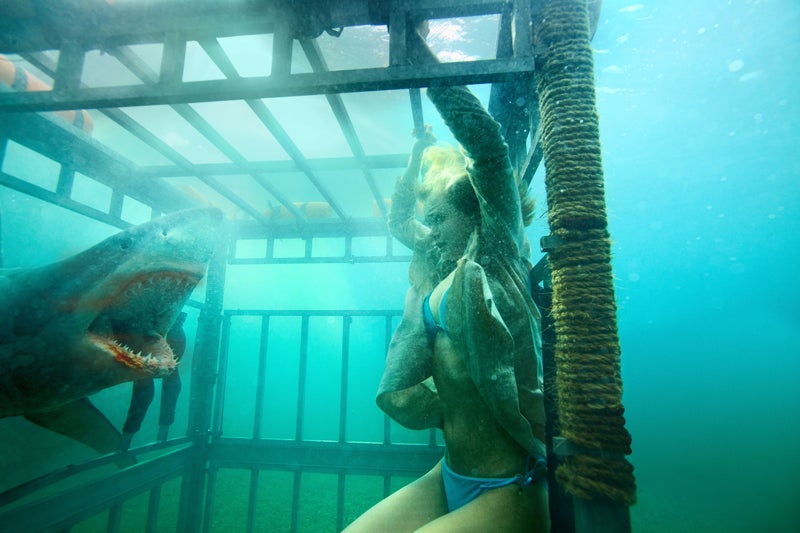 Pretty much sums it up. Image from IGN.com.

The good news about Shark Night is that the sharks are actually very well-done.  Mostly computer generated (though at least one mechanical shark actually injured a cameraman on set), these sharks look and move quite a bit like their real-life counterparts.  And this movie breaks the mold by introducing some variety; instead of just a horde of great whites, Shark Night gets five different species in on the carnage, so most of the fun for shark nerds is in anticipating which shark will be doing the biting.  At least one attack in the movie is perpetuated by a species that is totally unprecedented in shark movies (and not known to attack humans at all until earlier this year).

The strange thing about Shark Night is that the movie actually seems to be just as excited about its sharks as the viewer.  The writers and special effects staff did their homework, rendering the sharks somewhat realistically and dropping facts into the script (a number of them surprisingly current and accurate, though there is one seriously bad species mis-identification, all the more egregious given the effort put into including different sharks into the mix).  This movie also has the bizarre distinction of directly referencing how rare shark attacks are (one character tells another that he’s “beating some weird odds” by being attacked) while showing sharks doing pretty much nothing but eating people.  There are enough errors involved to show that no scientists were involved in the scriptwriting, but the sheer enthusiasm with which the different antagonists are introduced proves that there were at least some genuine shark fans involved in the making of this movie.

Even as a pure shark attack movie, Shark Night is not one of the greats.  There’s little in the way of suspense, and some of the attacks and shark vs. human confrontations are surprisingly anticlimactic.  This movie could have actually benefited quite a bit from an R-rated level of gore (really, who makes a PG-13 shark movie?).  That said, Shark Night does revel in its sharks, and the clear enthusiasm with which the predators are presented does score it some points.  This film is best seen with a rowdy group of like-minded people, and is the rare shark movie that may actually be more entertaining if you know a thing or two about sharks.  I give it a solid C+.