By now it’s somewhat old news that a recent study by Gavin Naylor and other researchers from all over (freely available here) has revealed that there may be up to 79 previously undiscovered shark and ray species, which complicates conservation and fisheries management considerably.  This absolutely epic, 250-page paper took genetic samples from 574 elasmobranch species worldwide in an effort to determine just how localized some wide-ranging species can be.  As mentioned before, potentially 79 “new” species have been uncovered by this effort, mostly resulting from genetic variation between regions.  However, some other discoveries are a little more complex, and therefore a little more interesting.  For a general overview of the methods and implications for conservation, check out Dave’s post and Week 3 of Blue Pints over at the parent blog.  I’ll be covering a few of the species-specific results, focusing on some sharks (and one ray) that are important to fisheries and conservation in the U.S. east coast.

As with any genetics study, these results are preliminary and need to be backed up by further genetic work as well as differences in morphology (size, body shape, etc.) and/or life-history characteristics.  One strength of Naylor et al. is that the authors do reference these data whenever they can, which really helps strengthen their case.  Here are the results for some species I write about often. 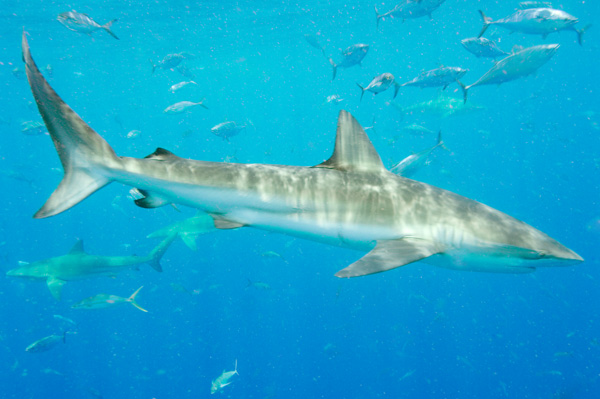 The dusky shark is one of the largest species in the genus Carcharhinus and is known for its slow growth, low reproductive output, and as a trade-off, its huge size at birth (3-4 feet at birth).  These characteristics also contribute to the serious population decline this species has experienced, as well as the extremely long recovery time projected by fisheries scientists (NOAA projects that the U.S. Atlantic stock won’t be recovered until 2108).  This is one of the poster children for catastrophic shark declines.

What makes dusky shark conservation especially difficult is that it’s pretty much the most “basic-looking” shark out there.  Duskies get landed despite being a no-take species in U.S. waters because they get confused with allowable species such as sandbar and blacktip sharks.  The biggest nightmare for distinguishing the species is the Galapagos shark (Carcharhinus galapagensis), a very similar species that occurs around offshore islands.  The only reliable morphological distinction is the number of vertebrae, and even in this case there is some overlap.  Instead, geographic location alone has been used to tell these species apart, with the general rule being “if it’s off a continent, it’s a dusky, if it’s off an island, it’s a Galapagos.”  Fortunately, Naylor et al. may have cured this headache for shark conservationists by showing that dusky and Galapagos sharks are actually the same species (a result Dr. Naylor presented at AES last year).  This means that Galapagos sharks may actually just be ocean-going dusky sharks.

If true, this is extremely important for dusky shark conservation, because it means there are actually a lot more duskies in the sea.  It also means that scientists in areas where the species overlap may no longer need to agonize over whether they’re looking at a dusky or a Galapagos. In contrast to the dusky and Galapagos sharks, some wide-ranging species such as the blacktip shark (Carcharhinus limbatus) seem to be genetically distinct across regions.  The blacktip shark, important to commercial and recreational fisheries in U.S. waters, actually does this in a very strange way that suggests it forms a species complex with two other species. Back in January, it hit the news that blacktip sharks in Australia are capable of hybridizing with the Australian blacktip shark (Carcharhinus tilstoni), and sure enough this species shows up as part of the complex.  Even stranger, the Atlantic and Pacific blacktip populations grouped on either side of a totally different species, the graceful shark (Carcharhinus amblyrinchoides).  There are some morphological differences between Atlantic and Pacific blacktips, including obvious differences in color (Atlantic blacktips lack a black tip on the anal fin that is present in the Pacific population).  Does this mean that Atlantic and Pacific blacktips are even farther apart than previously suspected, and is the graceful shark actually just another type of blacktip?  Either way, blacktips in the U.S. are clearly at least a distinct population.

Interestingly, the spinner shark (Carcharhinus brevipinna), another species very closely related to blacktips (and often confused with them), proved to be firmly grouped as their own distinct species.  This was consistent across their whole range, meaning a spinner off of North Carolina is essentially in the same genetic population as one off of Australia, and a lot more closely related than blacktips from either location. 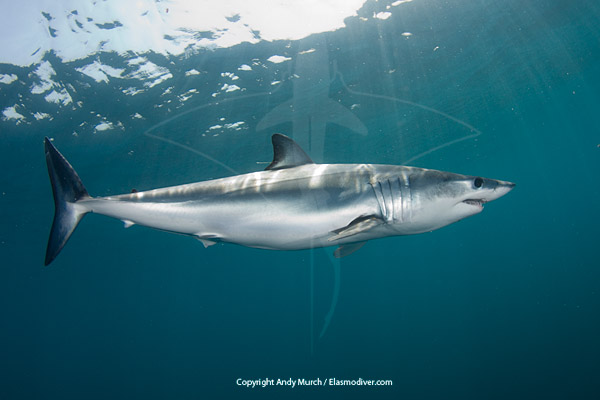 The shortfin mako (Isurus oxyrinchus) is one of my favorite species and truly the most badass fish in the sea.  It also has a very consistent genetic signature across its entire range.  With many of the other species in this study getting split by geographic region, it’s interesting that all makos seem to belong to one genetic “family.”  This seems to be consistent among the mackerel sharks, with only the great white (Carcharodon carcharias) showing significant genetic distinction between Atlantic and Pacific populations (though not quite enough to split them as thoroughly as the blacktip sharks). Spiny dogfish, the hero of this blog. Photo by Andy Murch (elasmodiver.com)

You didn’t think I’d skip the dags, did you?  Longtime readers will recall that the North Pacific dogfish population has been re-recognized as a separate species (Squalus suckleyi), while spiny dogfish from everywhere else still qualify as Squalus acanthias.  Naylor et al. found this to be true in their analysis and even went as far as saying that spiny dogfish provided one of the most interesting results in their study.  While other Squalus species tend to be highly localized, spiny dogfish are almost bizarre in their ability to be a genetically-connected population across such a huge range.  Spiny dogfish continue to be the ultimate generalists in the shark world. 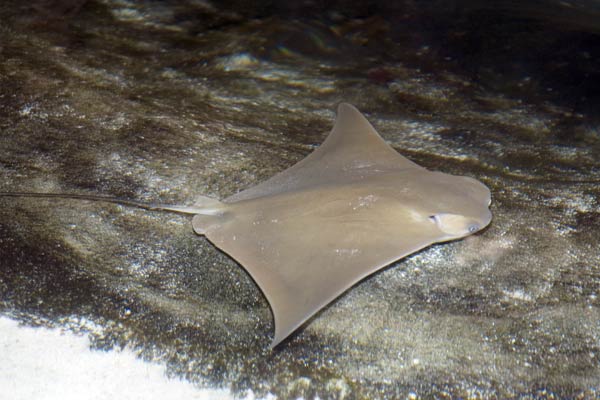 While spiny dogfish have long been reviled by fishermen, cownose rays (Rhinoptera bonasus) have entered the limelight in the last few years largely thanks to the infamous Myers et al. paper.  The results from Naylor et al. create a problematic situation for a species that is being managed as a nuisance.  It turns out that in the U.S. Atlantic and Gulf of Mexico, another species of cownose (Rhinoptera cf. steindnachneri) coincides with Rhinoptera bonasus.  These species are virtually impossible to tell apart visually, a situation eerily similar to the recently-discovered cryptic scalloped hammerhead in the Atlantic.  With “Save the Bay, Eat a Ray” and other movements gaining momentum, this far less-common cryptic species may be threatened.  This may be another good reason to try to reign in anti-ray sentiment.

Overally, the Naylor et al. paper opens up several new hypotheses for how sharks and rays are classified, with far-reaching implications for fisheries and conservation.  Again, these are preliminary results and the paper is most significant for the sheer amount of research it opens up.  As Andrew says, “each figure could be a dissertation.”  That said, there’s already enough here to start rethinking management and conservation for some key species.  It will be very interesting to see where this goes.