I haven’t written about New England great whites here in a while, though I do chime in about new sightings and info on Twitter.  However, it looks like the sharks of the East Coast are attracting attention from more than just me.  It looks like the show “Shark Wranglers” will be focusing on the white sharks of Cape Cod next season.  Going by precedent set in other waters where the Shark Wranglers have fished, their trip to Massachusetts may not be without controversy. 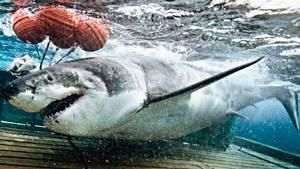 “Shark Wranglers” is the same crew (minus Dr. Michael Domeier) formerly featured on the show “Shark Men” on the National Geographic Channel, which itself used to be called “Expedition: Great White.”  These guys specialize in a unique, possibly unnecessarily-invasive procedure to catch and tag large sharks.  Their methods involve hooking the sharks and attaching buoys until the animal tires, at which point it is lead up to a movable platform on the side of the boat, raised out of the water, and has a satellite tag bolted to its dorsal fin.  These methods have been controversial, and it doesn’t help that the Shark Wranglers are developing a reputation for being bad guests.

The first major controversy involving the then-Shark Men was the apparent foul-hooking and mutilation of the white shark “Junior” off the Farallones.  This proved to be unrelated, but still nearly cost the team their permit to work in the marine preserve.  Then this spring, a bodyboarder was killed by a shark attack not far from where the Shark Wranglers had been working in South Africa.  Again, officially no direct responsibility was found, but two possible incidents in two years is impossible to ignore.

Are the Shark Wranglers too cavalier with their methods and safety standards, or are they just too easy a target due to their high profile and the fact that they work with dangerous animals?  Also worth asking, with personalities like Dr. Greg Skomal (who put on a great show during last year’s Shark Week) already working on great whites in the area, are the Shark Wranglers even necessary?  They have the potential to provide some good information on this up-and-coming shark population, but only if they can avoid acting like a bull in a china shop.

So far the sharks of New England have been very well-behaved and have been treated with respect by the people they share the water with.  Hopefully, the Shark Wranglers have learned from their previous bad press and are willing to play well with others.  If not, I hope my fellow New Englanders continue their fine tradition of “not suffering fools.”