In my last post about the things I’m finding in shark puke, I discussed the presence of menhaden in the diet of spiny dogfish.  These fat, oil-rich fish make quite a nutritious meal, and it usually only takes a handful of them (or chunks of one of them) to fill an average dogfish stomach.

However, there are times when the optimum meal just isn’t available and you’ve got to go with quantity over quality.  The title of this post is a big hint as to what I’m talking about here. 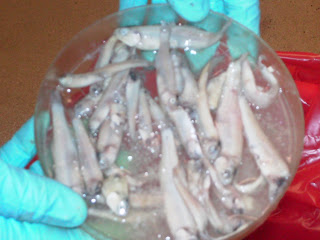 There’s too many of them!
That’s right, we’ve hit the anchovies.  While the larger fish showed up in low numbers or in pieces, apparently all a dogfish needs to do to eat a full stomach of anchovies is just swim through the school with its mouth open.  It’s hard to argue with the results of that strategy: one dogfish stomach contained 253 of the little forage fish, ranging from a diminutive 30 mm total length to a fairly impressive (by anchovy standards) 70 mm.  And because the majority of these fish were swallowed whole, they’re so well-preserved that the subsample taken for identification easily proved them to be bay achovies (Anchoa mitchilli).
Though it’s tempting to just grab the whole pile of anchovies and just get them over with, it’s worth going through the chunk of fish in detail, because in at least a few stomachs some oddballs have been mixed in.  A couple small croaker were expected, but one stomach offered something of a mystery: a small fish that has me and the lab shad/herring expert Dan Z scratching our heads. 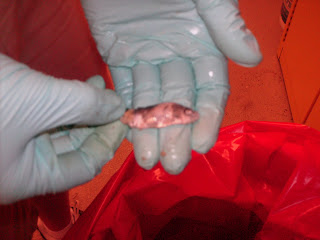 Apologies for the blurriness.  One day I’ll get a decent macro lens.
Though it can be tough to tell from the above image (and I fully expect it to be called out as some kind of Sasquatch picture, which is why this specimen is preserved so others wiser than myself can take a look at it) that little bugger has several defining morphological features that provide tantalizing evidence that it is a blueback herring (Alosa aestivalis).  It has very herring-like scales and skin (once you’ve seen a ton of herring you pretty much recognize the herring “look”) and the head shape pretty much confirms it as one of the river herrings.  Sure enough, the lining of the body cavity was blueish black, which is usually the smoking gun for identifying a blueback herring.  The problem is, this would have come out of a shark caught in February, which should be the entirely wrong time of year to find a blueback this size (to say nothing of the fact that the dogfish would likely have to swim up the river to get at it).  So the question is, what is this fish if it isn’t a blueback herring?
It should be noted that both Dan and I are dirty Yankees, so I’ll leave it up to any readers better-versed in local fish species.  Is there anything swimming around North Carolina in winter that would so closely resemble a juvenile blueback herring?