As anyone who’s ever done a diet study will tell you, you end up getting a lot of unverifiable gunk in your study animal’s stomach contents.  Sometimes enough of the consistency remains that you can tell generally what this chunk of meat used to be.  For example, it’s pretty easy to tell fish meat from anything else thanks to identifying features like white meat and the pattern of musculature.  However, getting beyond this stage takes a little more work and creativity.

Sometimes enough of the skin or some other identifying feature helps narrow it down.  For instance, the skin of Cupleid fishes (herrings and shads) has a shimmery kind of consistency that really stands out once you’ve seen it a few times.  Also, menhaden tend to have a large, olive-shaped gizzard that is one of the last pieces of the anatomy to digest.  I can’t tell you how many times I’ve been ready to classify a half-digested fish as “teleost remains” only to have one of those telltale digestive organs pop out.

And then there are the hard parts.  And by that I mean the hard parts of the prey.  Crustacean shells are one obvious example, but it is possible to identify bony fish at least down to a family level by scales and bones, as these are sometimes the absolute last parts of the fish to be broken down by the predator’s digestive enzymes.  What I’ve been doing is saving scales and bones that co-occur in the stomach with otherwise unidentifiable fish remains (sometimes these parts come right off the remains themselves) and photographing them using the lab’s sweet Olympus dissection scope.  Here’s an example. 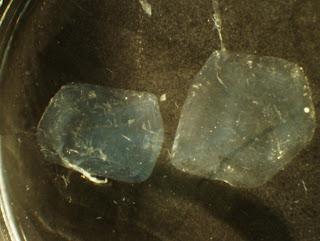 If we were fish, eventually we’d all look something like this.
Now that I have a collection of high-quality images of fish scales and bones, I need to ID them.  I’ve already taken scales off of intact menhaden to compare to the unidentified scales, but this only works if I manage to find at least one intact specimen of every species fed upon by spiny dogfish.  This is impossible in cases where the little sharks are attacking and dismembering large fish.  It’s unlikely I’ll be finding an entire striped bass in the stomach of a meter-long dogfish (though that would definitely be awesome).
What I need now (and what I’m hoping actually exists) is a nice taxonomic guide that covers scale and bone morphology.  Fishes of the Gulf of Maine is the standard I hold most guides up to, and even this classic falls short on hard part ID (for most species it includes a general description of scale morphology and vertebral counts, but I’d really like something with pictures).  Also, that particular book won’t cover some of the more southern species.  FishBase has pretty thorough taxonomic keys, but theirs are really only useful if you have the whole fish handy.  I feel like a species guide with scale and bone pictures must exist somewhere.  If anyone has a good suggestion for a key with good descriptions and/or pictures of the scales and bones, let me know and I’ll owe you a beer.