You may have noticed that it’s been two and half months since something went up here.  I can assure you, I’ve been a busy little grad student in that time.  One of the reasons is that I’ve been working on a couple of field/lab projects that have by necessity eaten up big chunks of my time.  Now that the time-consuming parts are done, I can share the recap with you.  For this post, I’ll run through a short-term project I worked on back in March, in which I returned to my roots by making some spiny dogfish puke.

One of the biggest questions about spiny dogfish (and one of the biggest drivers of dogfish research) is how many of our favorite fish are they actually eating?  The process of figuring this out is actually pretty straightforward, though for large, mobile predators like sharks it can be a logistical nightmare.  First, you need an idea of the diet in the wild.  Fortunately spiny dogfish are one shark that has had its stomach contents examined in great detail (by me, among others).  Second, you need to know how long it takes them to digest that food.  For most sharks this is a tough question to answer because keeping large sharks in captivity for research can be problematic.  Fortunately, spiny dogfish are exceptional among sharks in their ability to adapt to the lab rat lifestyle.  Given these two pieces of information, it’s possible to calculate just how much food it takes to keep a spiny dogfish alive for a day, year, or whatever time frame you need.  Theoretically, this should be somewhere around what they’d eat in the wild, which you can then use to estimate how much of a given fish’s population ends up in the bellies of dogfish.

I couldn’t do all this myself and had help from some noteworthy research partners.  This whole project took place over the course of two weeks in North Carolina’s Crystal Coast (the stretch of coastline between Cape Lookout and Cape Fear that also happens to be home to multiple Southern Fried Science writers).  Dogfish were caught and brought to their temporary residence with the help of local fishing guide Tom Roller, and were housed at the aquaculture facility at Carteret Community College.  Some CCC students were also able to help with shark wrangling, tank maintenance, and other fun science-related tasks.  All of this was graciously supported by NC Sea Grant. 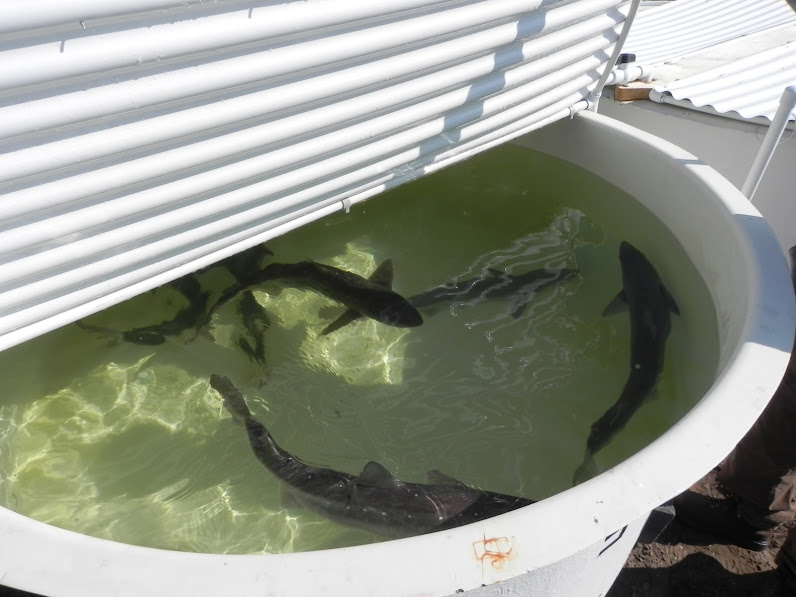 The accommodations for the captive dogfish. The set-up was comprised of six tanks; two “residence” tanks with 7 or 8 dogfish each and four experimental tanks where individual sharks were moved to for feeding trials.

Captive dogfish in custody, it was time to see just how much these “voracious” little sharks would eat.  The experimental method was actually pretty simple: weight the food, feed it to one of the sharks, wait a certain amount of time, and see how much of the food is left after that length of digestion time.  The food was recovered non-lethally, using the same technique I used to collect stomach contents for my Master’s work: shoving a tube down the throat and flushing it out.  This allowed the same individual dogfish to go through multiple feeding trials (which meant I didn’t have to have as high a captive population), and just as importantly allowed me to release the shark alive at the end of the project.

During feeding, a pre-weighed menhaden was dangled into one of the residence tanks, and the first shark to scarf it down was removed from the tank and placed in one of the experimental tanks where it was left for anywhere between 6 and 48 hours before being puked.  To help me grab the right shark, each dogfish was tagged with a uniquely-numbered spaghetti tag (which also makes them part of ECU’s tagging study upon release) and individual identifying features like scars and spot patterns were noted.  Of course becoming attached to the dogfish and giving them all nicknames happened almost immediately after. 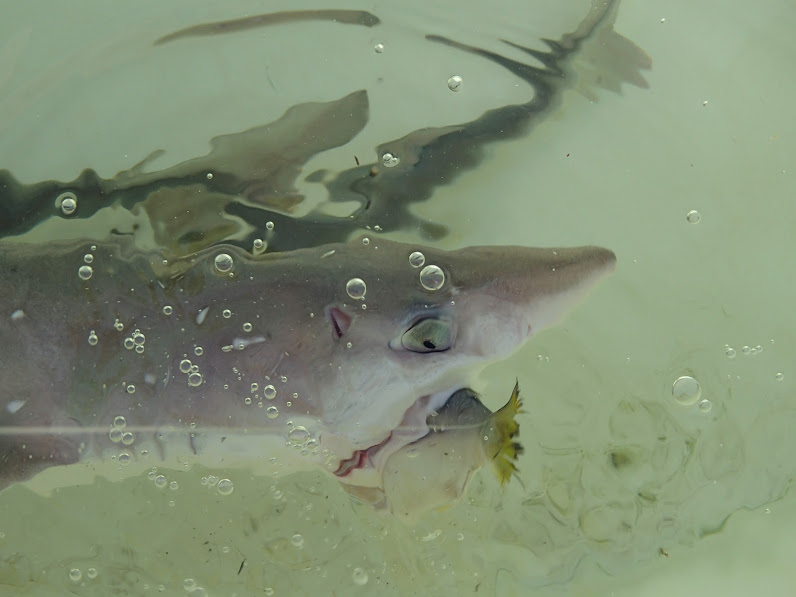 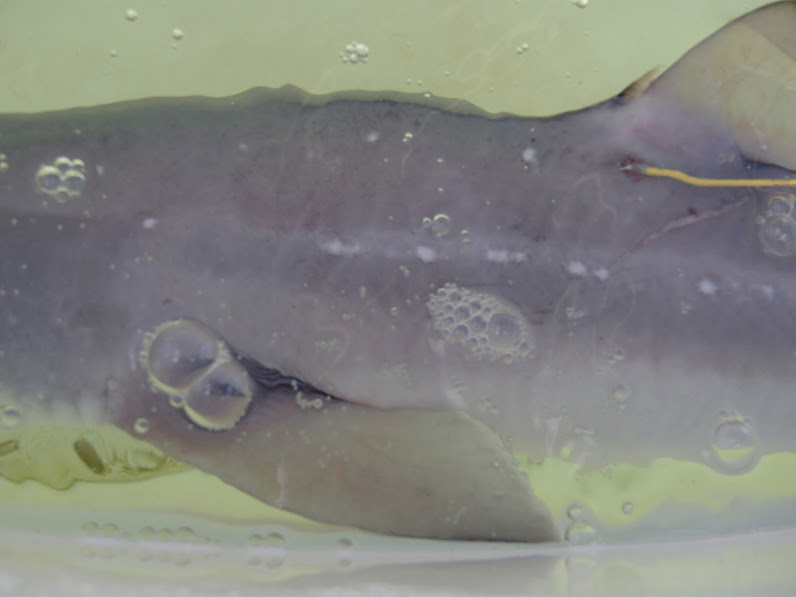 Spot patterns and tags were used to tell the dogfish apart. 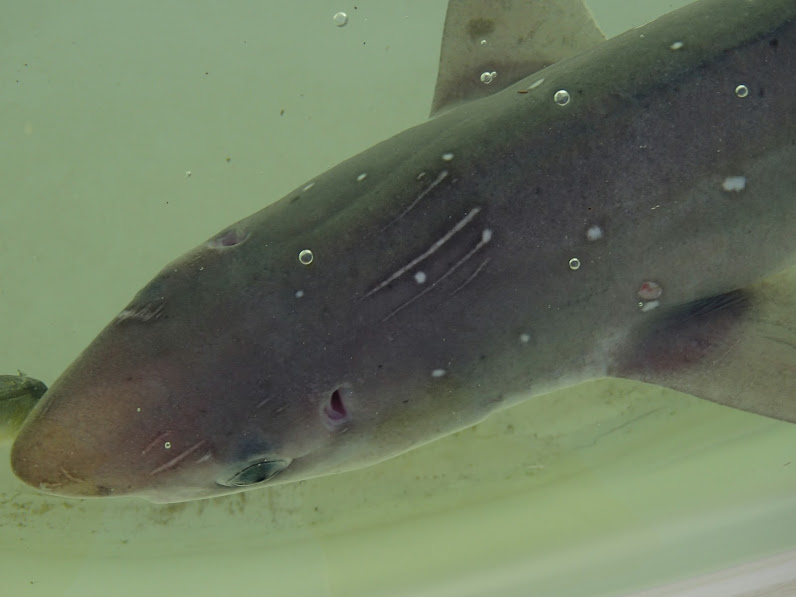 Two of the dogfish had evidence of monkfish attacks, which made them pretty easy to pick out. I named this one Itchy. 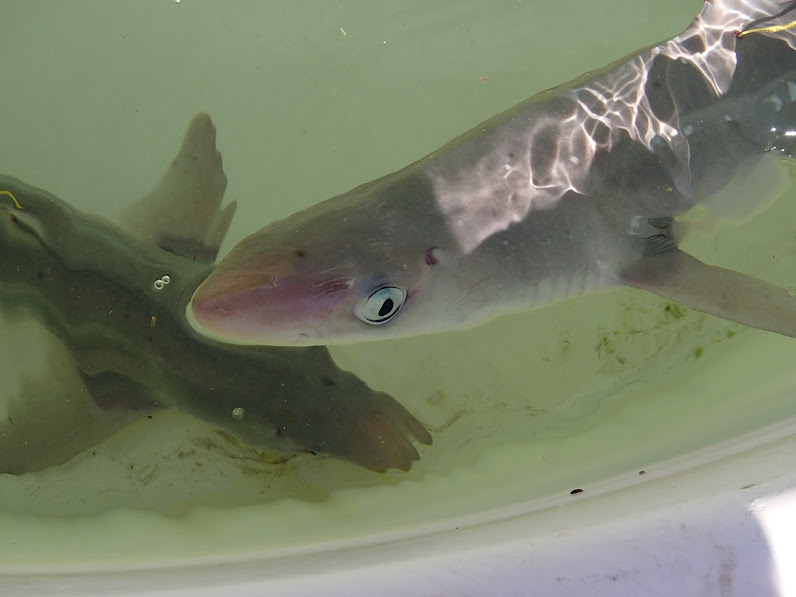 Monk was the other monkfish-bitten dogfish in the school, though her scars were a little more subtle. She was also one of the friendlier sharks. 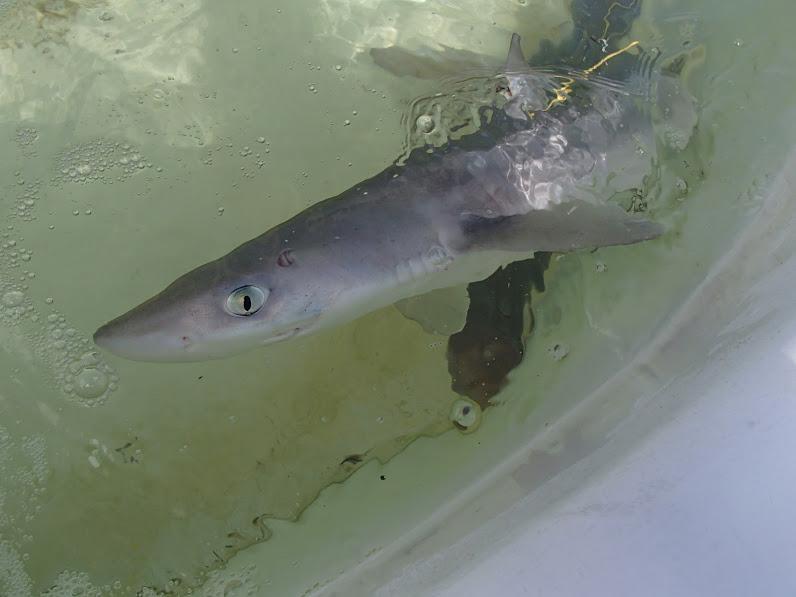 Gill was the runt of the group, but also the most feisty. Her name came from the gillnet scars on her sides. 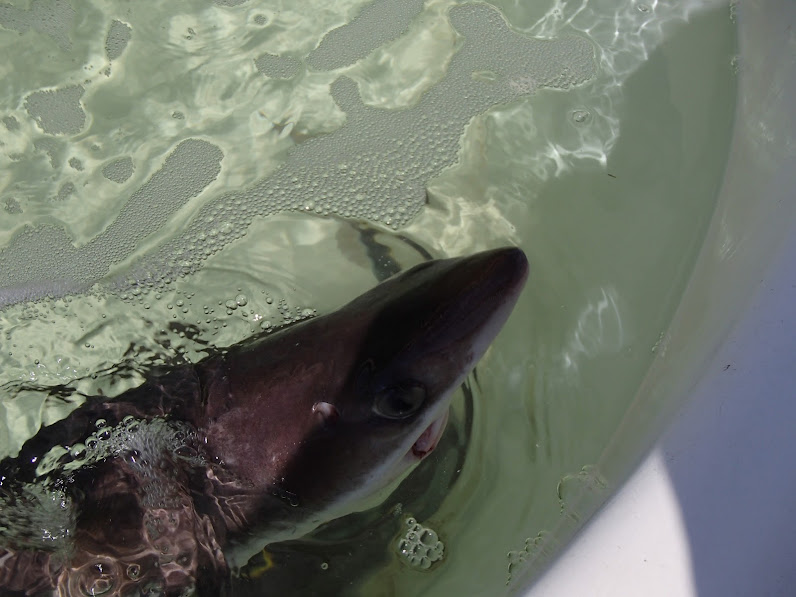 The captive sharks included one of the largest, most evil-looking spiny dogfish I’ve ever seen. She was named The Kraken, and developed a habit of spitting water at me.

Though it initially took longer than expected to actually get the dogfish to eat (who would have though the hardest part of the project would be getting spiny dogfish to eat?), once things got rolling the data came fast and furious.  Along the way, I got to visit and talk shop with some of the other scientists working at Morehead City’s various marine labs and even guest-lecture one of the aquaculture tech classes (I’m one of those freakish grad students who actually enjoys teaching).  It was actually bittersweet letting the dogfish go after their trials, but it gave me a sort of pride seeing them swim off towards the inlet. 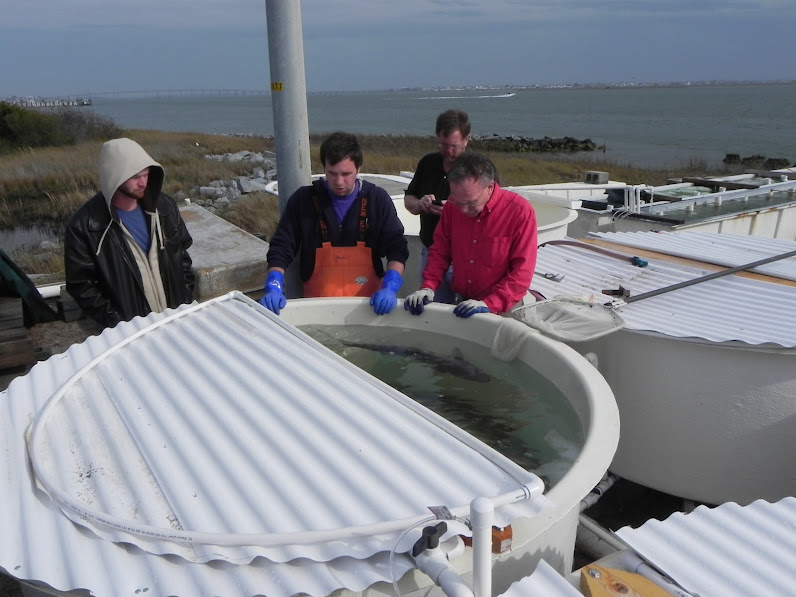 Guest-lecturing a CCC aquaculture tech class on shark fishery management and the logistics of keeping sharks in captivity. 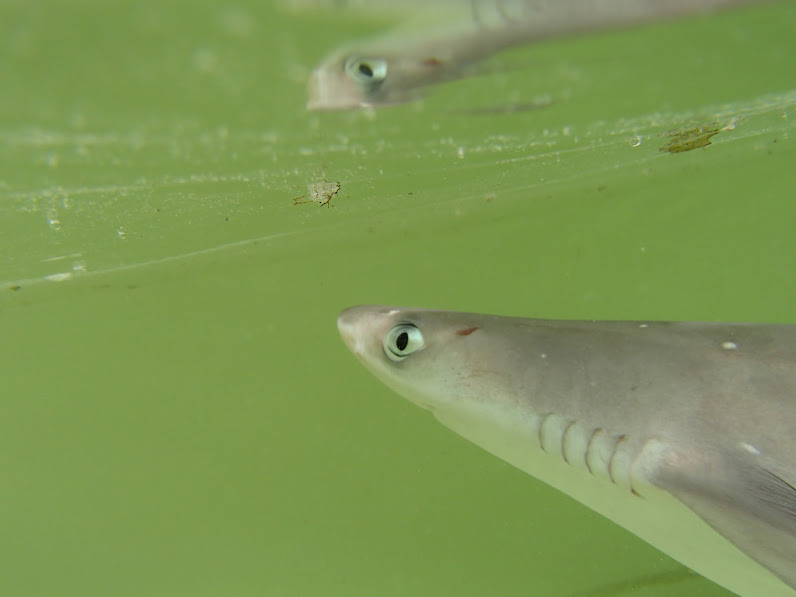 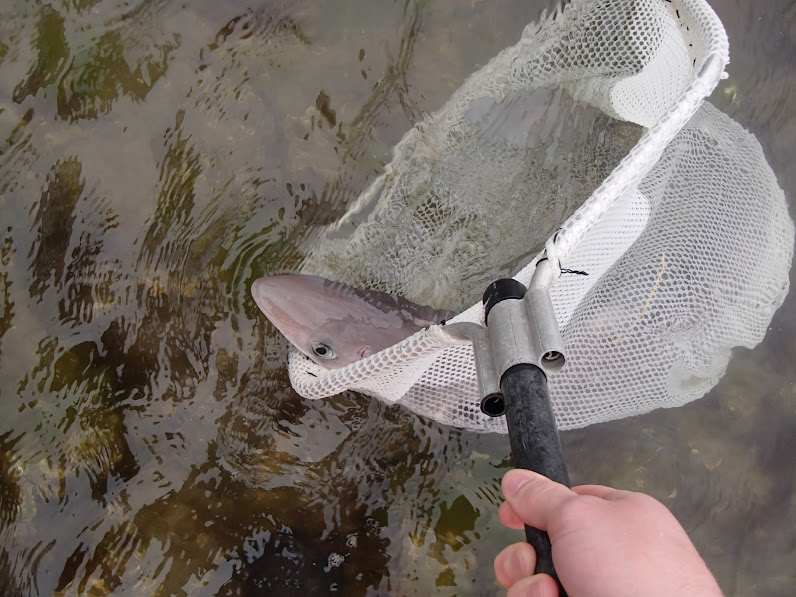 Dogfish were let go after either their second feeding trial or at the end of the project. 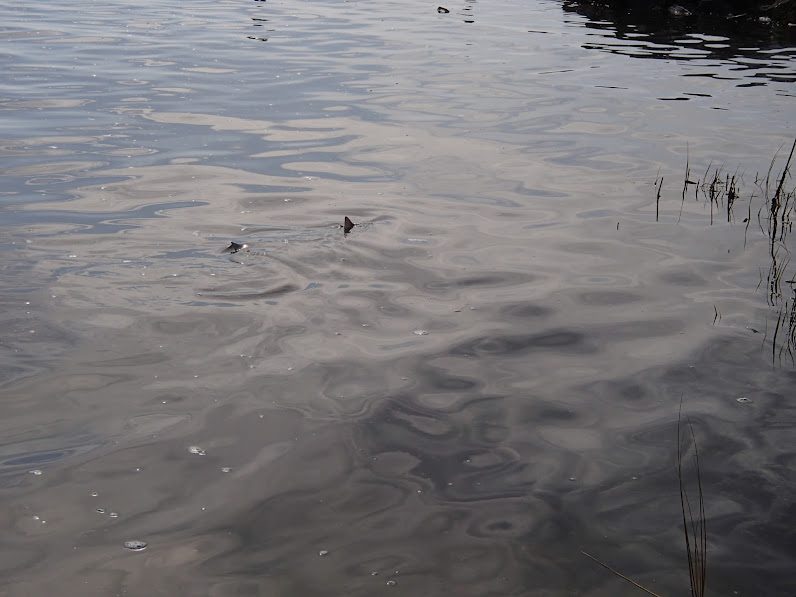 Off into the sunset.

Though short, this was one of the most fun and rewarding projects I’ve done so far.  I got to meet and work with a lot of cool people (and dogfish) and find a potentially crucial bit of information on the predatory life of spiny dogfish.  No spoilers here, but if you want to check out the results before the paper comes out I’ll be speaking on this project at this year’s American Elasmobranch Society conference.  I’d love to do something like this again (perhaps another round of trials?  Maybe smooth dogs next time?) and I hope those brave dogfish who donated their vomit to science are out there somewhere massacring a school of menhaden right now.