It’s been a long time coming, but the work I’ve been doing on spiny dogfish feeding ration has finally seen publication.  For those with access, the paper (published in the North American Journal of Fisheries Management) is now available online (and if you don’t have access you can still read the abstract, which has most of the good parts).  For those without access or those who prefer things a little less technical, keep reading to see what we found.

First off, why do we care how much a spiny dogfish, or any fish for that matter, is eating?  Aside from the fact that predator-prey interactions are interesting, the populations of the fish that we eat don’t exist in a vacuum with us as the only predators.  For every cod or tuna or mahi-mahi we eat, there are many that are eaten by their own predators, and those fish are also supported by their own prey populations.  This is the point of ecosystem-based management, to figure out how many of a given fish species the ecosystem as a whole needs so we know how many we can take out before we start to do ecological harm.  It’s an almost ridiculously complex issue that requires researchers to go through the entire ecosystem, species-by-species, to figure out what the crucial relationships between species are.  Ecosystem-based management of spiny dogfish requires knowing both which predators keep the dogfish population in check and which prey species (and how many of each of them) are needed to maintain a healthy dogfish stock.  Predator-prey interactions involving dogfish get a little more attention than most because dogfish have long been a scapegoat species blamed for declines in just about every economically-important fish they share water with.

To find out just how much prey an average dogfish usually eats in the wild, we worked in two phases.  The first was to conduct stomach content sampling on dogfish in the wild, which was the focus of my MS thesis.  The goal was to identify the most important and commonly-eaten prey species, and get an idea of what proportion of the dogfish diet was made up of those species.  Field sampling revealed that bony fishes were by far the most important prey category for the adult female dogfish most commonly encountered in coastal waters, and Atlantic menhaden were the most important individual species. This is what an Atlantic menhaden usually looks like coming out of a dogfish stomach.

Several important pieces of data were gathered from field sampling, including the average amount of food in a dogfish stomach, the number of empty stomachs (which we’ll come back to), and the breakdown of the prey.  However, the missing piece in finding out how much a dogfish truly needs to eat was the gastric evacuation rate, or the rate at which food is digested and passed out of the stomach. To get this piece of data, we conducted captive feeding trials where we fed dogfish a pre-weighed amount of food (in this case Atlantic menhaden, their food of choice in North Carolina waters) and made them puke it back up after a certain amount of time to see what was left.  By plotting remaining food against the time the sharks were allowed to digest it, we found out how long it takes a meal to evacuate completely from a spiny dogfish.  Crude, yes, but also effective and non-lethal (all the sharks were released afterwards and many are now carrying tags as part of a long-term tagging study).

Spiny dogfish, like most sharks and top predators in general, are intermittent feeders, meaning they’ll eat a big meal then not feed again until that meal is totally digested and gone.  With this in mind, we used a statistical method developed for top predator fishes that includes the average amount of food in the stomach, the proportion of empty stomachs in the population (told you we’d come back to it), and the gastric evacuation rate.  This equation spat out not only the average daily feeding ration for our dogfish, but also the timing between meals.  To provide an example of the potential predatory impact of spiny dogfish on a fish population, we took the daily ration estimate, applied it to the proportion of Atlantic menhaden in the diet, and compared the amount of menhaden consumed to estimates of the menhaden stock. 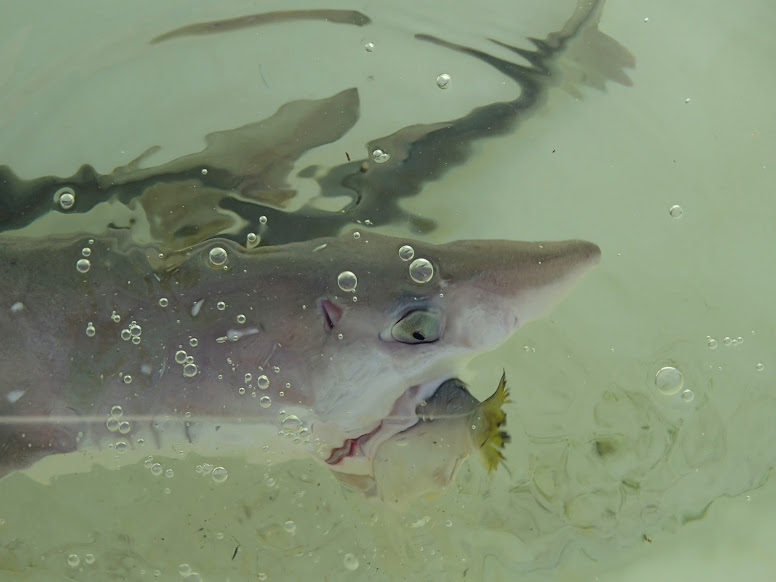 Spiny dogfish doing what dogfish do during a captive feeding trial.

So after all that, what did we find?  On average, spiny dogfish eat between 0.26-0.56% of their body weight per day, and can go 3-6 days between meals.  Under our estimated feeding ration, spiny dogfish predation would account for the loss of 1.5-3.3% of the Atlantic menhaden stock per year.

Though we had four different models that each fit the data fairly well, the highest estimate was still only a little over half of one percent.  This is among the lowest daily feeding ration of any shark, and considerably lower than even a slow-growing, cold-living species like Atlantic cod (daily ration ~1.5 % of body weight).  The daily ration estimates currently used by fisheries managers to determine amount of fish consumed by dogfish (which are already suspected of being too low by commercial fishermen) actually overestimate the feeding ration of spiny dogfish by as much as 70%.

Clearly these data are not supporting the notion of a “voracious beyond belief” predator.  While dogfish do currently enjoy a numerical advantage over other fish predators on the U.S. east coast, it doesn’t seem that this species eats quite enough to really crush entire stocks.  This suggests that having a dogfish fishery as essentially “pest control” to reduce their numbers and promote recovery of other species likely won’t accomplish much (having a dogfish fishery to utilize an under-used species or give fishermen something to target during lean times is another story, and not something I have a problem with).  Ultimately, predator-prey interactions are going to be beyond our ability to control without wiping out entire species, so it’s probably best to focus fishery management efforts on things we can control, like environmental degradation or overfishing.

This paper represents my Master’s work going full-circle, and is exactly what I had hoped to accomplish when I started out sifting through dogfish puke.  Thanks go out to Skip Kemp and the CCC Aquaculture Program for giving me a place to work, fishing guide Tom Roller for helping “recruit subjects” for the feeding trials, and NC Sea Grant for providing the funding that really pushed this project over the top.  The dogfish ration story isn’t over yet, we’ve already conducted a second round of feeding trials to narrow down that range of daily ration estimates and are currently analyzing the results.

If you’re interested in citing anything you’ve seen here, the citation (in AFS format) is as follows: