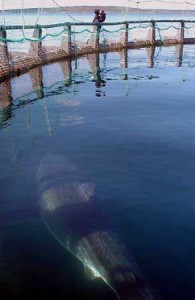 Great white shark trapped in a tuna pen off Australia after breaking in to feed. Image from jawshark.com.

In the greater spectrum of shark/human interactions, the majority of encounters undoubtedly take place between sharks and fishermen, even if encounters between sharks and swimmers get all the press.  However, that aquaculture is becoming more widespread as a use of the water is an understatement.  On land, the transition from hunter-gatherer to agrarian lifestyles profoundly changed how humans interact with other predators.  While the transition has not been as rapid in the ocean, there is already evidence that sharks have not let fish farming go unnoticed, and this may have serious implications for how the farmers of the sea interact with the wolves of the sea.

Aquaculture essentially takes a large number of food fish and puts them into one relatively small area.  The sounds, sights, and smells of such an aggregation of food act like a beacon for sharks, which are perfectly capable of breaking in and taking their share of the “herd.”  Though tuna ranching sits in the grey area between commercial fishing and aquaculture, this clip from the Discover Channel series “Tuna Wranglers” nicely sums up how sharks react to finding this caged buffet and the potential financial and health risks involved in dealing with them.

A new paper from researchers in Hawaii (Papastamatiou et al. 2010, tip o’ the hat to Underwater Thrills) shows how the presence of fish farms can alter the behavior of the sharks.  Tiger and sandbar sharks caught within 1 km of fish farms in Kona were fitted with acoustic tags and their presence at fish farm cages was monitored by acoustic receivers placed at various fish farms, aggregating devices, and at least one shark diving site, and these sharks could also be picked up at other receivers placed around the island for other studies (the equipment was actually identical to the equipment we use in the Rulifson lab).  This effectively gave the researchers a “net” of receivers that could be used to determine where the sharks were in geographical relation to the fish cages.

Interestingly, Papastamatiou et al. (2010) found that shark behavior in relation to aquaculture sites differed by species.  Sandbar sharks were more likely to take up residence near the cages, while tiger sharks, a more wide-ranging apex predator, made regular visits but rarely stayed for extended periods of time.  However, because tiger sharks didn’t stay near the cages doesn’t mean their behavior wasn’t altered by them.  Tiger sharks normally patrol large individual ranges and tend to occur at particularly productive areas regularly.  The results from this study suggest that Kona’s tiger sharks have added fish farms to their rotation of foraging sites.

The main weakness of this study is one that is common and arguably unavoidable throughout marine biology; the lack of a baseline for comparison.  There simply isn’t enough information on the specific sites regularly visited by sandbar and tiger sharks in Hawaiian waters to make a decent comparison between their habits before and after the onset of aquaculture.  That said, Papastamatiou et al. (2010) have found compelling evidence that, at least as of right now, fish farms are important stops in the routine of at least some Hawaiian sharks.

The implications of the apparent affinity of sharks for fish farms are significant.  The onset of agriculture on land lead to the extinction or near-extinction of most large land-based predators like tigers and wolves.  Farms had the dual effect of taking large chunks out of the predators’ range while serving as an attractant due to the presence of large numbers of fat, tasty, and often pretty dumb livestock.  Because of this, humans had a vested interest in eliminating predators near their farms, which didn’t work out so well for the wolves of the land.  As aquaculture expands, we can only hope that the lessons learned the hard way from land will lead to a healthier relationship between man and the wolves of the ocean.