One of the many projects that have been consuming time that could be spent blogging is the acoustic telemetry project ECU has been involved with off of Cape Hatteras.  Last year saw me take over the day-to-day running of this valuable piece of equipment, from gear maintenance and data downloading to what I think of as “the fun part:” the actual catching and tagging of sharks.  After a year of working with Hatteras fishermen and ECU’s intrepid diving and boating staff, this project is finally reaching a point where the data are good enough to start sharing.  The next couple months will see a mini-blitz of coverage on the Hatteras array, including a piece I’m writing for North Carolina Sea Grant’s Coastwatch magazine and a presentation of the preliminary data at the American Fisheries Society’s Southern Division meeting.  This post is the vanguard of that mini-blitz.

It’s probably a good time to recap what it is we’re doing with this array project.  The Rulifson lab at ECU maintains a line of acoustic receivers stretching 12 miles straight out into the Atlantic Ocean off of Hatteras Village, just south of Cape Hatteras.  The original intent for this array was to pick up spiny dogfish as they migrated around the hook of Cape Hatteras, and last year we expanded into covering coastal shark species like sandbar and dusky sharks.  Acoustic transmitter tags are surgically implanted into the sharks to both prevent tag loss and prevent drag on the shark by an external tag (don’t worry, we’re all properly trained and constantly have the shark’s health in mind).  Whenever the tagged shark swims within detection range of one of the receivers (usually about 800 meters or so), the transmitter “pings in” with its unique ID number while the receiver records the date and time of the ping.  The tags transmit at regular intervals so we can get an idea of how long the shark stays within range.  Some of our tags also transmit temperature and depth data to give us a better look at the shark’s environmental preferences.

Why go to all this trouble?  Nursery habitat is crucial to maintaining populations of long-lived, slow-growing species like many sharks, which are most vulnerable before they grow into apex predators.  Thanks to the migratory nature of coastal sharks there are many areas along a particular species’ range that are important for part of the year but not year-round.  Our acoustic tags will allow us to learn when our tagged species migrate in and out of the Cape Hatteras area, which will in turn allow fishermen to avoid large schools of juvenile sharks, saving them the trouble of having sort out a bunch of baby sharks they may not be able to keep and saving the sharks potential capture stress and mortality.

With the exposition out of the way, here are some shark-filled field work pictures from the last couple rounds off of Cape Hatteras. 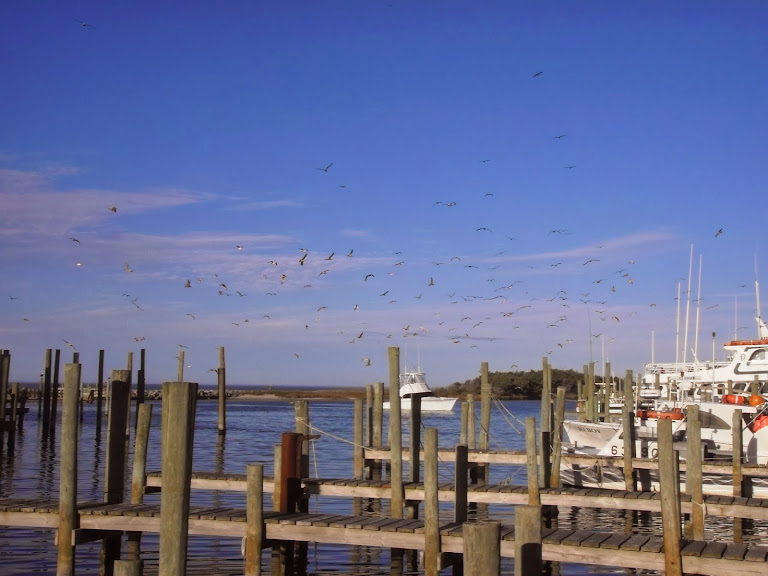 Lovely and picturesque Hatteras Harbor. That huge flock of seagulls means someone had a good day of fishing. 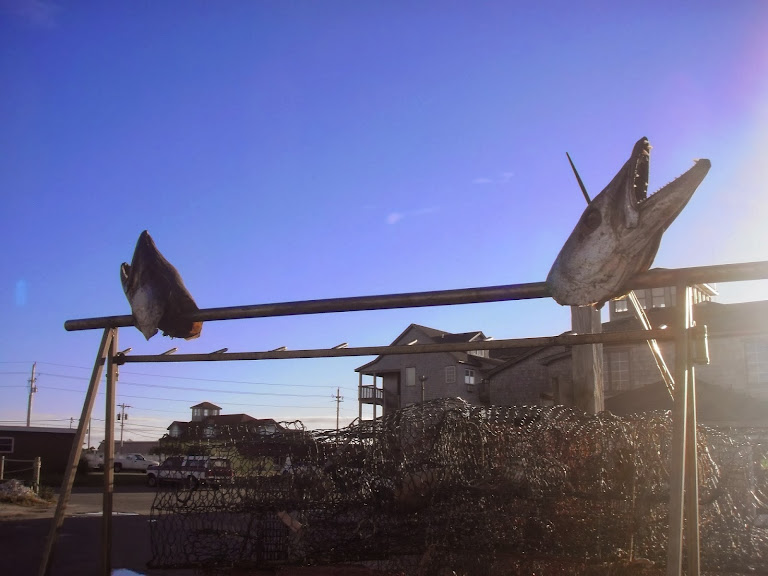 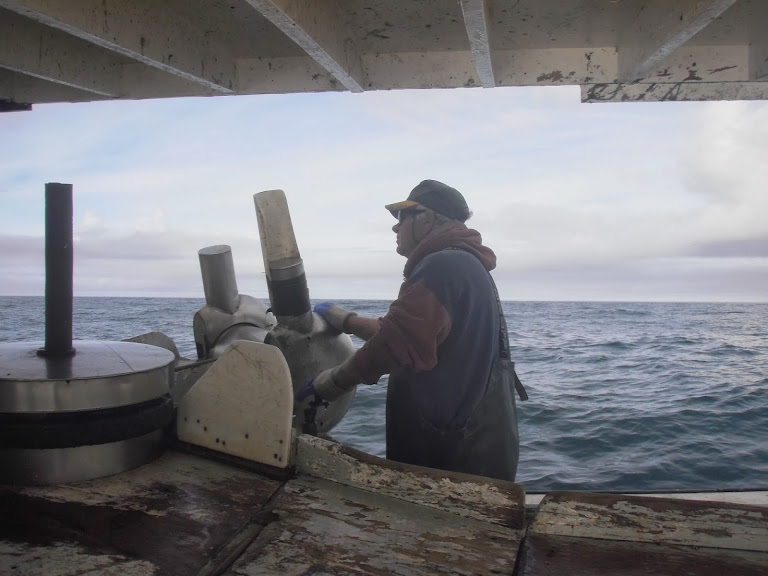 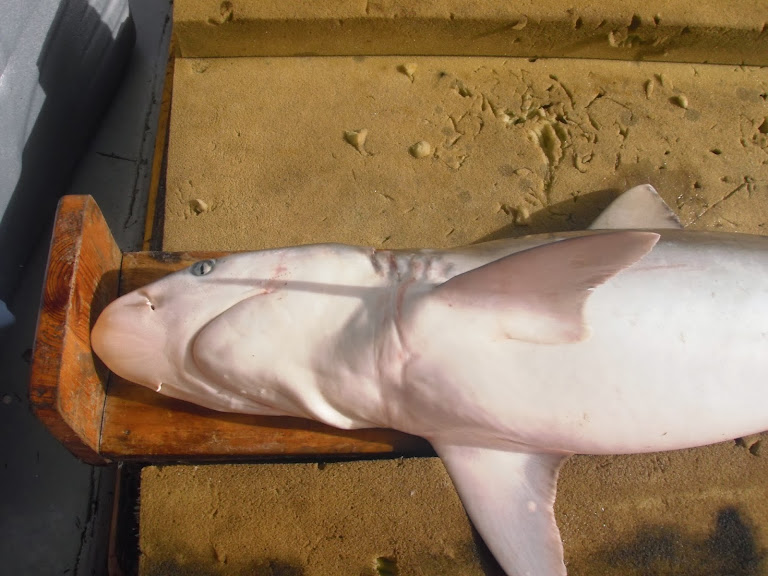 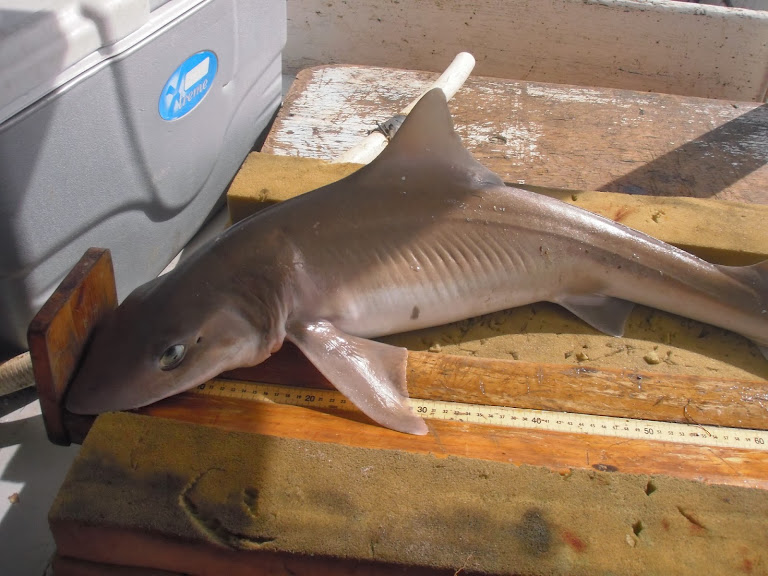 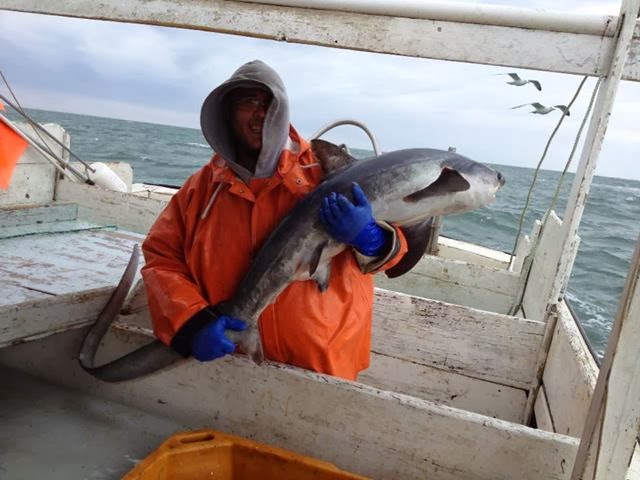 Chris’ mate James with a juvenile thresher shark, one of the more distinctive visitors to North Carolina waters. Photo by Evan Knight.

This project has really been coming together nicely, and I can’t wait to share it with everyone.  Keep an eye out for more updates.