Atlantic salmon (Salmo salar) just can’t catch a break.  Like their Pacific counterparts, Atlantic salmon are anadromous, meaning they live in the ocean as adults, but swim upriver to spawn.  Despite having the evolutionary advantage of being able to spawn more than once in their lives, Atlantic salmon had the bad luck of requiring rivers in areas with some of the most dense human populations on the planet.  Overfishing took its toll, but dam construction and habitat degradation, all resulting from human settling along the rivers, have combined to make wild Atlantic salmon almost functionally extinct.  The species largely exists today in salmon farms and landlocked lakes where it has been stocked.

However, as human efforts doomed Salmo salar, human efforts are also put towards regrowing the population of this tasty species.  Among those efforts is a large-scale hatchery operation in the Penobscot River, which supplies hatchery-raises smolts to the salmon population in the Gulf of Maine.  Unfortunately, life is becoming tougher for young salmon once they leave the safe confines of the river, and the hatchery is seeing diminishing returns of adults returning to spawn.  The Gulf of Maine is full of piscivorous predators that wouldn’t think twice about snacking on some salmon smolts (including, you guessed it, the mighty spiny dogfish) and the local environment is seeing some changes from climate change.  Are changing weather conditions encouraging salmon predators?  And if so, who’s doing the most damage?

Friedland et al. (2011) took a comprehensive approach to finding out.  They took data from trawl survey data from NOAA/NMFS trawl surveys, records of prevailing wind and ocean currents, and returns from hatchery-released salmon.  From these data they found that there was a difference in recruitment between salmon that had been out to sea for one year (“one sea-winter,” or 1SW) and those that had been out of the river for two years (2SW).  Over time, the returns of 1SW salmon have remained largely unchanged, but 2SW salmon have declined precipitously.  The longer the salmon are out in the Gulf, the less likely they are to return. 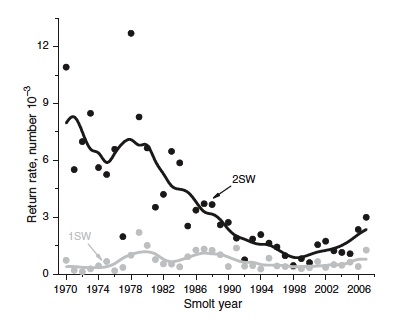 The return rate of 2SW salmon was correlated with wind/water current data and changes in the abundance of just about every piscivorous fish in the Gulf of Maine that has ever had a salmon in its stomach contents.  Silver and spotted hake, spiny dogfish, Atlantic cod, monkfish, sea ravens, striped bass, and just about every skate species were included in the analysis, and the correlations were matched spatially with the areas in the Gulf where the greatest abundance changes had occurred (it’s amazing what you can do with a huge data set like the NMFS trawl surveys).  This allowed Friedland et al. (2011) to generate “kill-zone” maps of correlation between predator abundance and suspected salmon mortality. 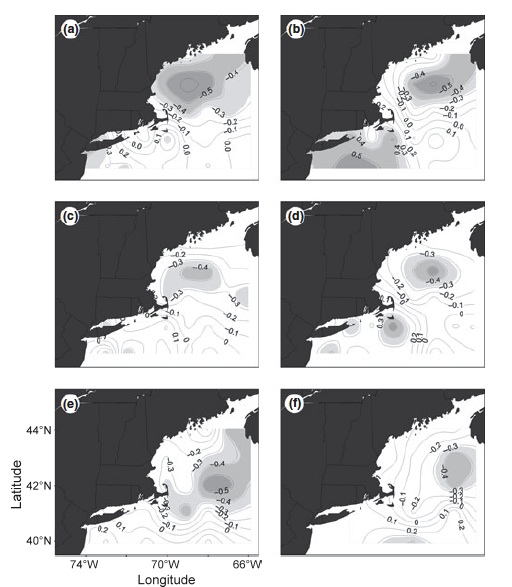 Spiny dogfish play third fiddle to two relatively unassuming fish predators: silver hake and spotted hake.  Silver hake in particular were identified by Friedland et al. (2011) as potentially representing the greatest predatory threat to salmon smolts in the Gulf of Maine.  These little nightmarish combinations of barracuda and cod are both a major source of prey for larger fish (fully-grown Atlantic salmon probably chow down on them) and a major predator for smaller fish (juvenile salmon would be well-advised to flee in terror).  They are also one of the few predators in the Gulf of Maine to increase in abundance over to the study period.

So where does climate come in?  It turns out that warming trends have caused the prevailing wind and water currents to shift northeast, potentially altering the migration corridor for Atlantic salmon and bringing it straight across Georges Bank.  Humans like to fish Georges Bank because it’s loaded with large, delicious piscivores like cod, flounder, and dogfish, and for this same reason it’s probably not good that salmon of easy-prey size are swimming straight into it.  Also, more piscivores like striped bass, that have traditionally been more rare in the Gulf of Maine, are starting to cross north of Cape Cod.  Stripers are a particular threat because they are also anadromous, meaning they can chase salmon smolts all the way back up the river.

The take-home message from Friedland et al. (2011) is that the Gulf of Maine is warming and the migration patterns of hatchery-released Atlantic salmon are being altered.  Worse, they’re being altered in a way that is driving them straight into the hungry mouths of a greater abundance and diversity of fish predators.  It sure does suck to be a wild Atlantic salmon.

Tip o’ the hat to WhySharksMatter for sending this paper along.  Finally got to it!