This might possibly be the most awesome paper about tagging fish ever.

One of the handiest advances in telemetry, especially of large, highly-migratory oceanic species, has been the advent of PSAT tags.  These tags do it all: movement, depth, temperature, shoe size, blood type… all without ever having to worry about actually getting the tag back (though I’m sure it would be nice, those things aren’t cheap).  David has a nice write-up on the benefits and pitfalls of satellite tags, and the general consensus is that while the technology is definitely not perfect yet (if the signal hits the satellite wrong it can end up looking like your shark is swimming around in Ohio, for example) but SPOT tags are just too damn useful and neat to not use.

One issue with any kind of tagging and mark/recapture study, however, is that you’re releasing your experimental fish with its lovingly applied or implanted tag into a wild ocean.  You’re trusting that ocean to allow your animals to live at least long enough to provide some useful, valuable, or interesting data.  Sometimes, the ocean doesn’t cooperate and the tag gets knocked off, the fish dies from the stress of capture, or the equipment just staunchly refuses to work.  However, in the case of the fish dying, the tag does not necessarily stop recording data.  In fact, sometimes you can end up with data on something completely different…

As mentioned above, you let your tagged fish go in the hopes that it will survive, resume its normal behavior, and swim freely for as long as the battery life of the tag will allow.  However, you aren’t the only creature interested in your tagged fish, and occasionally something like this happens: 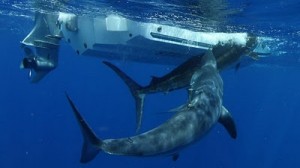 Most of the time the tag realizes through some preprogrammed stimuli (usually a lack of vertical movement by the fish) that its host has died and detaches itself and will hopefully bob to the surface and transmit data.  However, what biologists Dave Kerstetter (check out his talk on pelagic stingrays from the Southern Division AFS meeting), Jeffrey Polovina, and John Graves discovered was that, in at least three instances, the tag has actually been swallowed whole by the predator and continues to bravely record data within the belly of the beast.  We know this because those three tags actually made it back.

Satellite tagging is still a relatively new art, but it’s been used extensively enough that certain measurements are a dead giveaway as to what the tagged animal is up to and, in this case, what happened to it.  These particular tags came from two white marlins and one opah (one of the coolest things about Kerstetter’s work is his willingness to tag unusual and interesting but not necessarily economonically-valuable species when the opportunity presents itself).  The tags took data on depth, temperature, and light levels, and from those measurements Kerstetter and company were able to not only figure out that their fish had been eaten, but also what predators were the likely suspects. 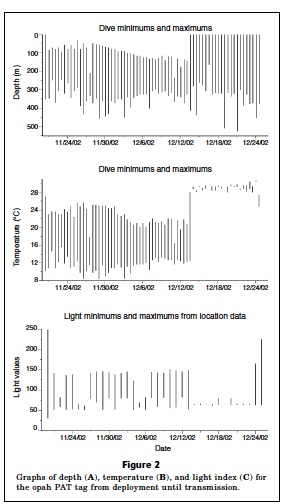 Depth, temperature, and light data recovered from a satellite tag attached to an opah that was apparently eaten by a Lamniform shark. From Kerstetter et al. 2004.

The figure at right is from only one of the fish, but perfectly illustrates the general pattern found in all three.  Sometime during December 12th all of the data being recorded abruptly change.  The dive profile of the fish completely changes, concentrating more on the surface while occasionally making deeper dives.  The temperature is suddenly elevated and considerably more stable.  Perhaps most tellingly, the light completely disappears until the tag is released and floats back up to the surface.  So what’s going on here?

What you’re seeing is the tag ceasing to record data from its attached fish and beginning to record data from an entirely new ride: the predator that ate the opah.  The light completely vanishes because the tag is now collecting data from the inside of a stomach.  The dive profile and temperature data now represent the behavior and internal temperature of the predator.  And it was from that data that Kerstetter et al. were able to get an idea of what actually killed their fish.

Though in all three cases the temperature was elevated from what the tags had been recording in the ambient water before being eaten, the internal temperatures were still too cold to be a mammalian predator, so orcas and other large toothed whales are innocent here.  The researchers reasoned that the only other predators capable of taking such large prey (and swallowing a PSAT tag whole) were large sharks.  The temperature remained fairly stable in the case of the opah, but was more variable in the data inadvertently collected from the two white marlin tags.  This gave away that the marlin killers were not members of a temperature-regulating species, but the opah’s predator was.  With that knowledge, they were able to check the “after ingestion” dive profiles against known data about shark diving behavior from other tagging studies.  The depth data from the marlin tags matched the diving behavior of blue sharks, and the data taken from the opah’s tag matched the deep dives performed by great whites.

So thanks to a little satellite tag CSI, Kerstetter et al. were able to figure out not only that their tags had been eaten, but that their marlin had likely been eaten by blue sharks and their opah had probably been devoured by a great white.  How did they get this data back at all?  Despite everything I’ve heard about the unreliability of satellite tags, apparently they really know how to build those things.  These tags spent a couple days in the stomachs of sharks before finally being yakked up, at which point they happily floated to the surface and told the whole story to orbiting satellites.  Through their misadventures, each of these tags delivered interesting data for not one, but two species.  I’m surprised this story hasn’t shown up in satellite tag ads, because almost makes me want to start using satellite tags in the hope that something will eat the fish I put them on.