Some of you may recall a couple years ago (the summer of 2012) I had a series of posts under the category “Summer of the Shark” recounting the events of my field work trying to survey Pamlico Sound for sharks.  The purpose of that project was to identify potential shark nursery habitat in the second-largest estuary in the United States and proved to be a little more than I could handle.  Though my labmates and I would ultimately fail to find any sharks (2012 was an exceptionally rainy year and the influx of fresh water made truly marine species hard to come by), we did see some really cool places and catch some really cool fish.

I’m happy to announce that this summer, the Summer of the Shark is officially back.  This year, it’ll be a new estuary, the much smaller but no less dynamic Back/Core Sound area near Beaufort.  Those of you following me on Twitter have seen my updates from the field under the hashtag #NCsharkscience, and already know that sampling started last month.  We’ve already started running into sharks.  Going forward, I’ll do my best to keep the field work posts coming as shortly after the actual trips as possible.  But first, we need to go back…

This year’s sampling would not have been possible without the help of Cecilia Krahforst, another grad student at ECU working on the effects of background noise on sound-producing fish (using the ever-charismatic oyster toadfish as a model).  I’ll have to have her write a guest post on here sometime, her research is really cool and getting some interesting results.  Last summer, in exchange for helping her out during what were often sunset-to-sunrise field days, I got to use some of the boat time to cast around with my gillnet, longline, and rod and reel gear to see what I could find.

The first set turned up a handful of juvenile Atlantic sharpnose sharks, which was 100% more sharks than I had found in Pamlico Sound.  This collaborative sampling would run from July-November, and was crucial in helping me figure out what to focus on with these inshore shark surveys. 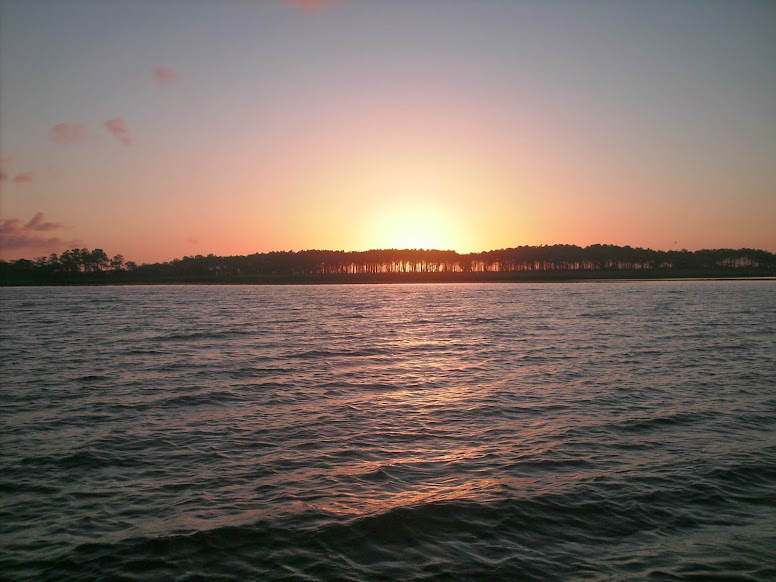 Sunrise over Jarrett Bay in the southern end of Core Sound. We would often see both sunset and sunrise during a single field day. 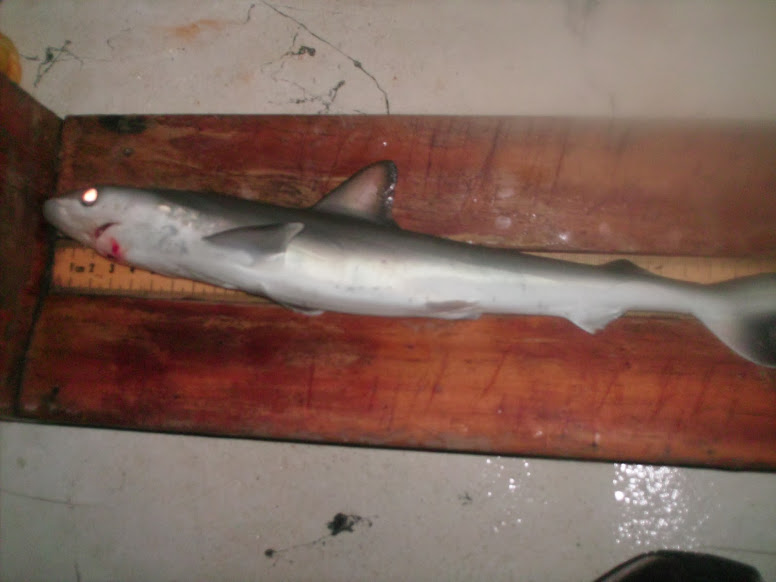 The first of many juvenile sharpnose sharks that would be caught and measured over the course of the summer. We endured six rain storms during the first sampling trip to catch this little bugger.

Just because my luck with sharks changed didn’t mean my luck with other aspects of field work changed.  During the first night trip in Jarrett Bay, no less than six rain storms formed in the mouth of the bay, meaning we had to ride them out (the closest boat launch is outside of the bay itself).  However, last summer’s sampling proved that the Back/Core Sound area is a great location for studying habitat selection in a mobile apex predator (juvenile sharks, for example).  The sounds include a variety of habitat types all within a short boat ride of one another, and are small enough to thoroughly cover with sampling sites.  Most importantly, Back and Core Sound are very, very sharky.  This means I don’t have to worry as much about actually finding my study animals and can focus on testing some hypotheses.

Last year’s work also allowed me to refine my sampling techniques to gather as much data as possible while doing the least harm to the sharks.  Longline and gillnet sets were kept short to minimize capture stress, and sharks were processed as fast as possible at the boat.  These methods seemed to work: out of over 60 sharks captured and sampled over five months, there were only eight capture mortalities.  I tried to get as much information as I could out of the mortalities as well, transporting them back to the lab to collect stomach contents and take muscle and liver samples for potential stable isotope analysis.  One of these sharks was dissected for an ichthyology class to help them learn about elasmobranch anatomy.  All in all, I finished up the sampling season with a decent little pile of data.

Oh, and we caught a lot of neat stuff too. 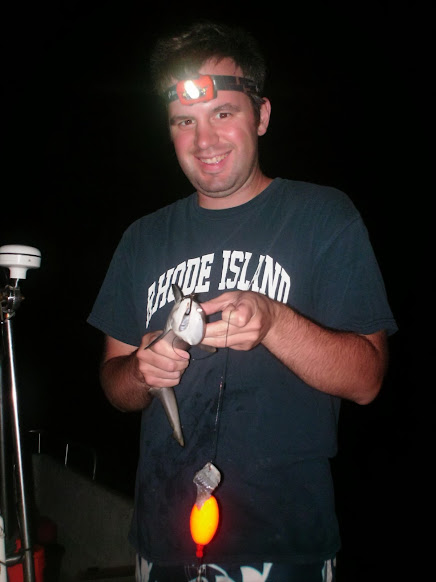 This little sharpnose shark actually brought back a fishing rig that broke off my line as I was casting. With the spotlight I watched that orange “fireball” cork work its way back towards the boat as the shark pulled it.  About a month later, another, much larger shark would prove to be much less polite and rip my entire fishing rod right out of the boat. 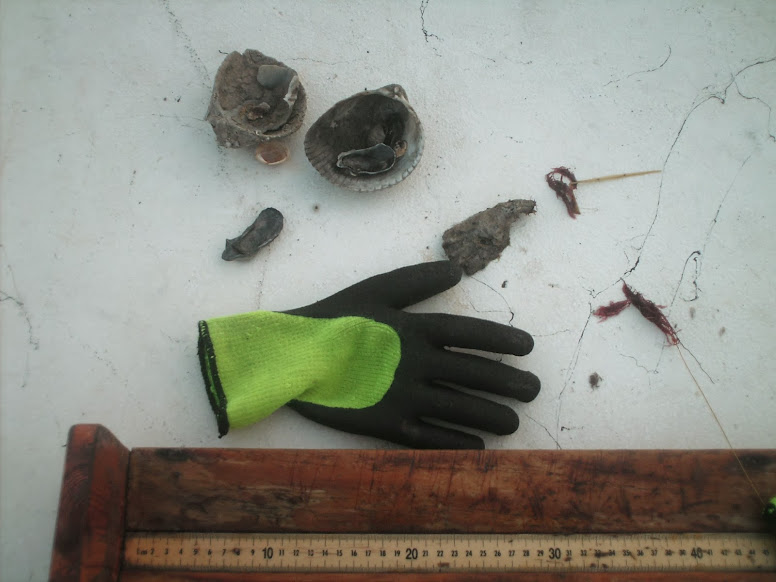 Bizarrely, one longline set came back with these shells seemingly deliberately placed on the hooks. I blame mermaids. 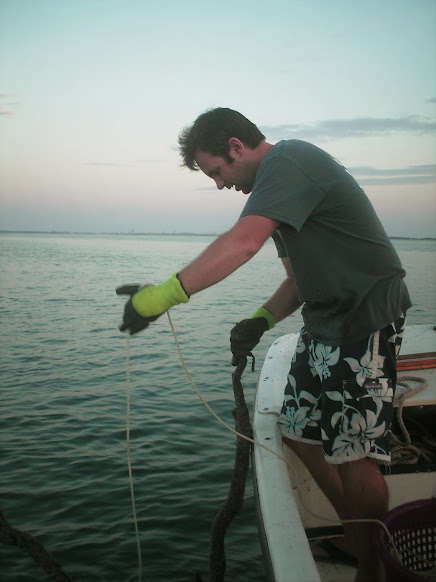 Somehow we also managed to catch most of a tree on the longline. I don’t even know what to blame for that one. 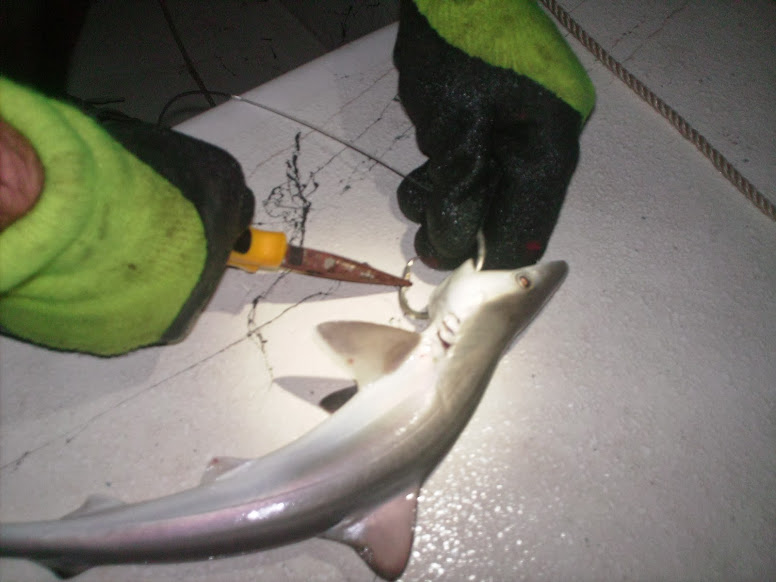 The greatest thing about sharpnose sharks is that they have absolutely no idea how small they are. This is a foot-long shark caught on a hook designed for 3-6 foot fish. 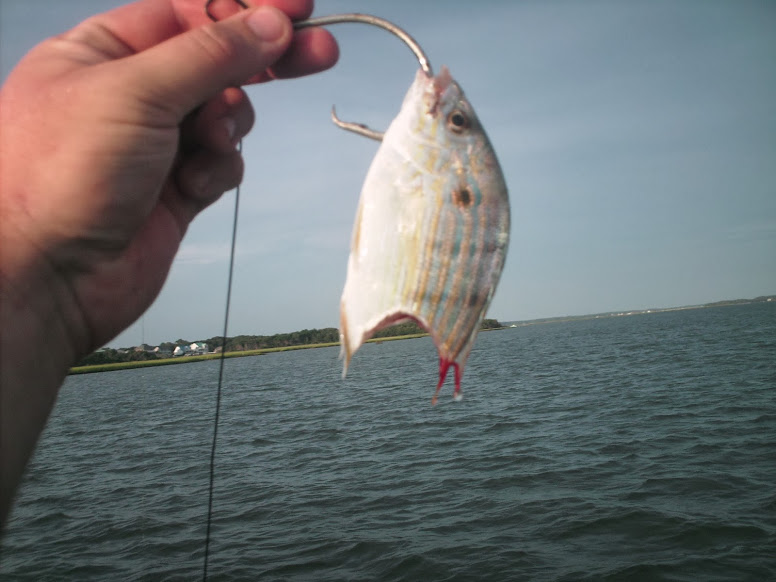 Eventually the sharpnose sharks will learn to bite around the hook. 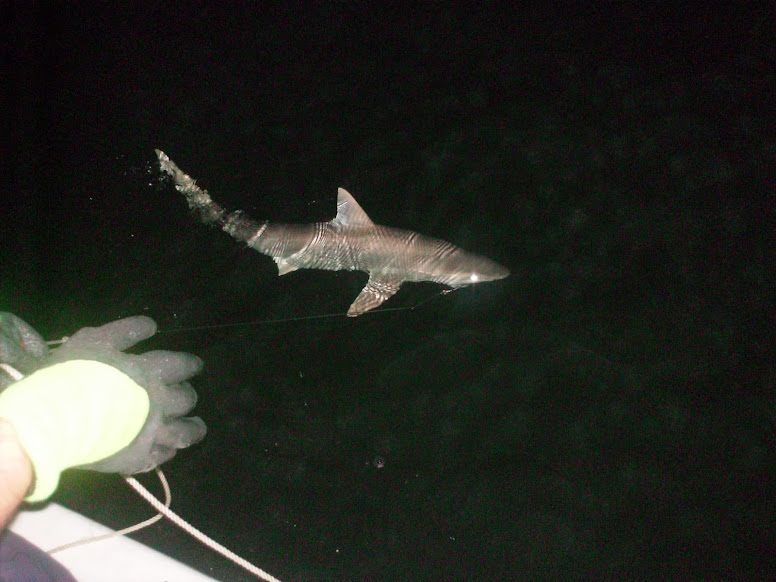 Not all of the sharks were sharnposes. This is a mature blacknose shark caught near the inlet. 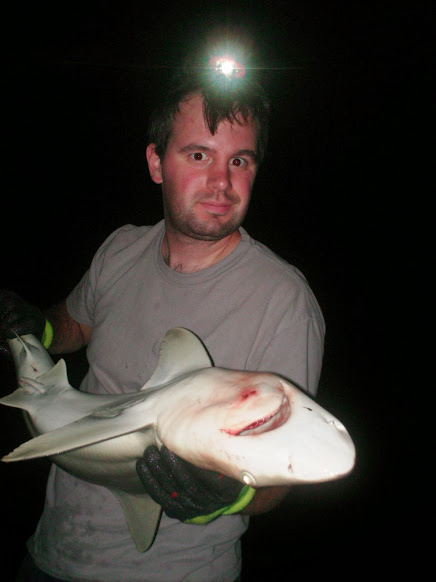 The blacknose shark was an adult male. Here he is after processing and ready for release. I’m holding him upside down to keep him under tonic immobility until I put him back in the water. This year, we’ve already caught sharks larger than this. 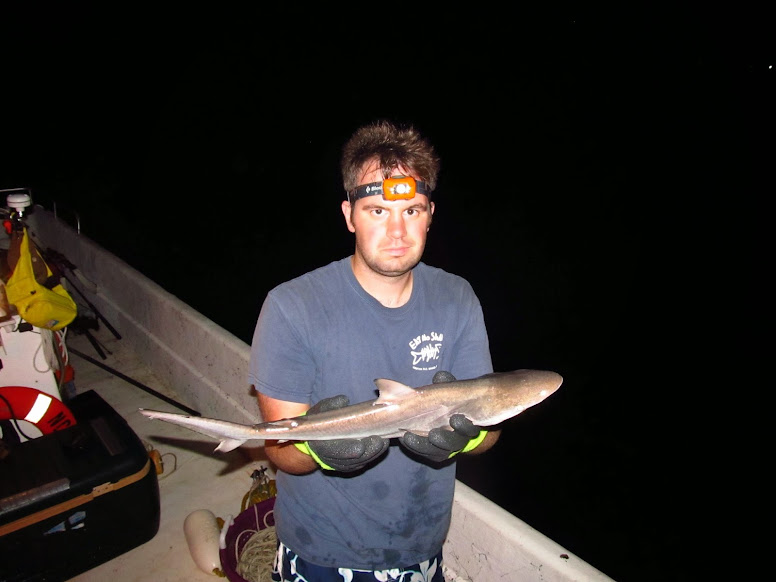 My first and only (so far) spinner shark. I look a little glum because this shark was one of our few mortalities.  Andrew was with us for this trip and took this picture. 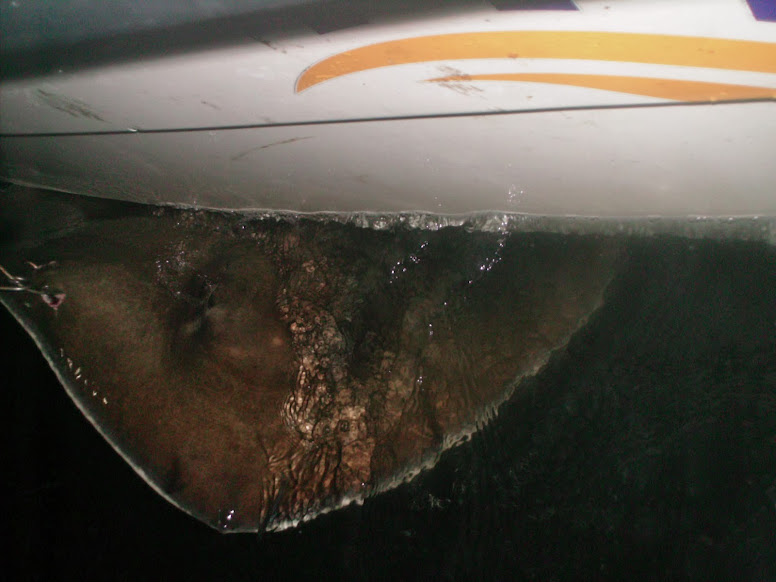 Not everything on the longline was a shark. This was one of the most intimidating southern stingrays I’ve ever had to deal with, with a wingspan probably over 5 feet. The barb on its tail was long enough to go completely through my arm. Suffice to say, we cut the hook without bringing this beast on the boat.

So what’s on deck for this year’s sampling?  More gillnet and longline sets, though we’re expanding the gillnet sampling to get a better idea of the fish community the sharks are interacting with.  We’re also incorporating some non-lethal stomach content collection to determine what the sharks are foraging on and where they might be doing the foraging.  If there’s time, we might even do a little acoustic tagging.  Stick around, there are plenty more sharks where these came from.