Recently Jason Goldman at the great blog The Thoughtful Animal (if you have any interest in animal behavior at all, you should be following it) put up a post titled “Sharks With Friends.”  In that post, he summarizes a recent paper showing that blacktip sharks (Carcharhinus melanopterus) from schools with the same individuals.  Social behavior in sharks is a big interest of mine because my Masters thesis study animal, the mighty spiny dogfish (Squalus acanthias) is among the most social sharks out there, forming huge schools as they migrate along the coast.  However, this recent paper is not the first to study social behavior in sharks, though it does have a really cool result and methodology that I’ll got into later.  Though dolphins and octopuses get a lot of credit for being the smartest creatures in the sea, sharks may be just as complex in their social behavior, meaning they might be capable of hatching world domination schemes just as diabolical as those of the cetaceans and cephalopods.  Sharks also have the advantage of being able to eat dolphins and octopuses.  I for one welcome our finned overlords.

The first question whenever animals are observed getting into groups is why.  With fishes, the motivation is often protection through safety in numbers, though this logic breaks down for predatory fishes, especially those with as few natural predators as sharks.  Moving around in groups may also increase the efficiency of finding food; an aggregation of sharks is a lot more noses in the water sniffing out blood, and if one finds food all might share in the spoils.  This theory can be problematic because hunting in groups also increases competition for food within the group, and piles of ecology papers have been written reconciling the costs and benefits of pack hunting.  There is also the chance that the fish are in a group by sheer chance, clustering around shelter or a particularly productive feeding area.

Lemon sharks (Negaprion brevirostris) are a popular species to conduct behavior studies on due to their general hardiness in experimental conditions, and the fact that researching them guarantees you get to work in a field site as nice as Bimini.  Guttridge et al. (2009) conducted an elegant experiment at general shark research badass Samuel Gruber‘s field lab in the Bahamas (he’s part of the “et al.”) designed to determine if lemons actively seek out other sharks to hang out with or if they group based on some non-social motivation (food, habitat, etc.).  They did this by setting up an enclosure in which the test shark (an age-1 or age-2-3 lemon shark pup) is place in the center, with a side enclosure containing other lemon sharks at one side and an empty enclosure at the other.  They then measured how much time the shark spent in different areas of the enclosure.  In some trials the lemon sharks in the side enclosure were replaced with nurse sharks (Ginglymostoma cirratum) to see if the test shark preferred the company of its own species or if any shark common to the area would do. 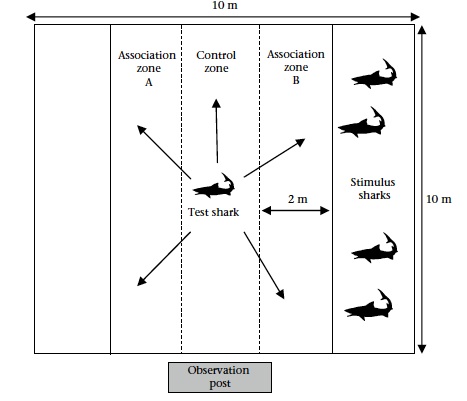 The setup for the behavior experiment in Guttridge et al. (2009). From the original paper.

The results of this experiment demonstrated some interesting aspects of social behavior in sharks.  First, the test sharks spent most of their time at the side of the enclosure with the other sharks, but only if the sharks in that area were other lemons.  The lemon shark pups were attracted to the presence of other lemon sharks.  This was only the case for the age-2-3 sharks, however.  Age-1 sharks showed no particular preference for the parts of the enclosure nearest the other sharks.  The authors hypothesized that newborn lemon sharks are more concerned with environmental conditions when picking habitat, while older sharks (presumably higher on the food chain) group together for social reasons.  Sharks like being with other sharks, and are able to tell the difference between species.

According to a new paper (the one referenced by Jason Goldman), sharks can not only recognize their own species, but other individual sharks.  Mourier et al. (2011) showed this by photographing blacktip reef sharks in a section of reef in Moorea, French Polynesia.  This allowed the researchers to identify individual sharks based on color patterns, scarring, and other visual clues.  By matching the photos up with the geographical locations where they were taken, Mourier et al. (2011) showed that individual sharks would associate with the same other individuals regularly, and were able to extrapolate that data out to form a map of the shark communities on the reef.  Even more interesting, one of the communities appears to be made up of two or more sub-communities.  The take home message – blacktip reef sharks apparently make friends with other sharks, and can form communities with smaller “neighborhoods.”

So sharks not only recognize their own species, but also individuals, and show preference for spending time with the same individuals on a regular basis.  The motivation for shark aggregations, at least in the case of lemon and blacktip reef sharks, appears to be primarily social.  But why would such a behavior evolve?  Jacoby et al. (2010) kept male and female lesser spotted dogfish (Scyliorhinus canicula, actually a catshark) in captivity and observed their interactions.  Like the blacktip reef shark study, they found that catsharks would associate with the same individuals on a regular basis, and appeared to be more relaxed in the presence of familiar sharks.  Females associated with strange sharks were more agitated in the presence of males.  The authors suggested from these results that female catsharks may band together to resist the attentions of males, a good idea given how rough shark courtship can be.

All of these studies point towards sharks being able to form complex social bonds, all the way to the point of recognizing and associating with other individuals of the same species.  All three species in these studies are relatively sedentary species, showing high site fidelity and short migrations.  It would be interesting to see if these same behavioral patterns would show up in more highly migratory species, but some of these species do show highly social behavior (i.e. spiny dogfish, hammerheads, great whites).  In any case, sharks seem to be capable of socializing just as much as the scientists who study them.