My esteemed colleague Andrew over at Southern Fried Science made me aware of a piece of gray literature that is directly related to sharks, fishing, and the debate over the shark finning ban currently trying to worm its way through Congress.  Gray literature is the term for scientific papers that are not necessarily peer-reviewed, usually because their contents are time-sensitive.  Andrew covers the importance and caveats of gray literature better than I could, so I’ll cover what this particular report means for sharks and the fishermen that catch them.

The bill currently mired in the Senate is not a shark fishing ban, and this is an important distinction to make.  Basically shark fishermen would still be allowed to fish, but would have to land all their sharks with the fins still attached.  This allows for easier identification by managers and prevents the sneaking of endangered species into the harvest (since many Carcharhinid sharks are almost impossible to identify once they’ve been reduced to “logs” by removing the head and fins), and also guarantees that there aren’t more fins than sharks coming into port.  This seems perfectly reasonable, so why are some claiming that requiring certain sharks to be landed intact would ruin the fishery?

One of the justifications used by those opposing the bill is that requiring smooth dogfish to be landed intact effectively ruins the meat and therefore causes a major component of the coastal shark catch to be unmarketable.  Sharks in general need to be cleaned and bled out immediately after capture in order to prevent the urea that naturally occurs in their tissues for osmoregulation from breaking down into ammonia, which obviously ruins the meat.  Fishermen claim that removing the fins is an essential part of the cleaning process for smooth dogfish, which are apparently prone to spoiling faster than other shark species.  That smooth dogfish are also the biggest component of the North Carolina shark fishery gives this particular species a lot of weight in the shark-finning argument.

Enter this report by John Waters of Duke University.  In a very quick and tidy experiment, this bit of gray literature attempts to answer the question of whether landing smooth dogfish with fins attached has any effect on the quality of the meat.  Waters angled five smooth dogfish near Atlantic Beach in North Carolina and subjected each to a different cleaning treatment to determine if the presence of fins on the carcass caused the meat to degrade faster.  These treatments were 1.) removing the head and fins as in the current fishing practice, 2.) removing the head and guts but leaving the fins intact, 3.) keeping the fins on and storing the carcass in an iced brine solution, and 4.) leaving the uncleaned shark out for two hours before cleaning the commercial fisherman way.  The carcasses were observed at 30 minute intervals to determine how long it took the meat to degrade without storing on ice. 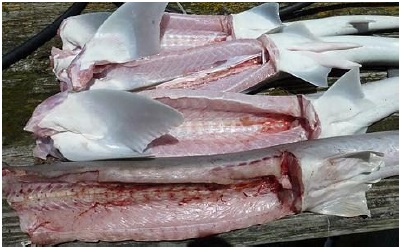 Smooth dogfish processed in the Waters report. The bottom carcass represents Treatment 1, the next up Treatment 2, and the top two Treatment 3. Note the condition of the meat.

The picture above comes directly from the report, and you can see by the condition of the meat that the current practice actually produces the lowest quality meat.  However, according to the report the bottom carcass had also been sitting out the longest.  What Waters actually found is that the quality of the meat has everything to do how quickly the organs are removed and that removing the fins made no tangible difference.

This experiment also represents a deviation from normal fishing practices in that the carcasses were left out in the open air instead of being immediately frozen.  With this in mind it becomes clear that even the argument that smooth dogfish meat spoils faster than that of other sharks may be inaccurate.  After three hours the carcasses still had apparently market-worthy meat.

So what benefit do fishermen actually derive from landing smooth dogfish without fins?  On a fishing vessel, time is at a premium, so it could be that fishermen are simply trying to save processing time (Waters did mention that removing the fins during cleaning is actually slightly faster than cutting around them) or avoid having to deal with the cleaning at the dock.  This justification wasn’t tested as part of this experiment, but then again the “time is money” argument is not the one being used to combat the bill.

Such a quick, small-scale study does have some issues to it that would probably keep it from being published in a peer-reviewed journal.  For one thing, five sharks is a very small sample size, and having multiple sharks per treatment would definitely make the study more robust.  Also, though the meat was inspected visually, nothing was done to check its chemical consistency, so there could potentially be some traces of ammonia in the meat, perhaps not enough to actually spoil it but enough to affect the flavor.  However, as a quick response to an argument that can be answered by science, this little document does its job and does it well.

Because that’s what science does.  It answers questions.

In case the Google Docs link above doesn’t work, here’s the PDF of the Waters report: Waters_Smooth_dogfish_Final