Last week the Smithsonian Environmental Research Center (SERC) Movement of Life Initiative tagging efforts went on the road as I headed south to Florida’s Treasure Coast in search of cownose rays and bull sharks.  Both of these species are the focus of Movement of Life acoustic tagging efforts, and both are known to inhabit this part of the U.S. Atlantic coast during the winter.  This region of Florida also hosts the Indian River Lagoon, an extensive barrier-island estuary that takes up nearly 2/3 of the east coast of the state.  Well known as a good spot to see charismatic sea mammals like manatees and bottlenose dolphins, the lagoon is also known as a major nursery for bull sharks.  In fact, it’s likely that Paul, the first shark tagged in this study, is related to bull sharks that spent their first summers in this estuary.  Tagging evidence and local observations also suggest that cownose rays from all over the east coast use the lagoon and surrounding ocean as an overwintering habitat, and it’s possible that any bull sharks occurring here in the winter might head north during the summer.  This behavior creates the opportunity to tag members of multiple ray and shark populations while they’re concentrated in their wintering grounds, which could help identify migratory connections between the Indian River Lagoon and the Chesapeake Bay or other coastal areas.  The fact that it also gave me an excuse to travel to Florida in January was an added bonus.

The last time I went out tagging, it took three days of sampling to find one shark.  Fortunately, I had excellent people to work with who happened to have a shark and ray survey already established in the area.  The Ajemian lab at the Florida Atlantic University Harbor Branch Oceanographic Institute (Harbor Branch from here on in) have started a standardized gillnet and longline survey aimed at providing baseline and long-term data on the use of the Indian River Lagoon by our favorite cartilaginous fishes.  With the gear and know-how ready and after acclimating to the Florida weather, we set out into the estuary in search of bull sharks and cownose rays to tag. 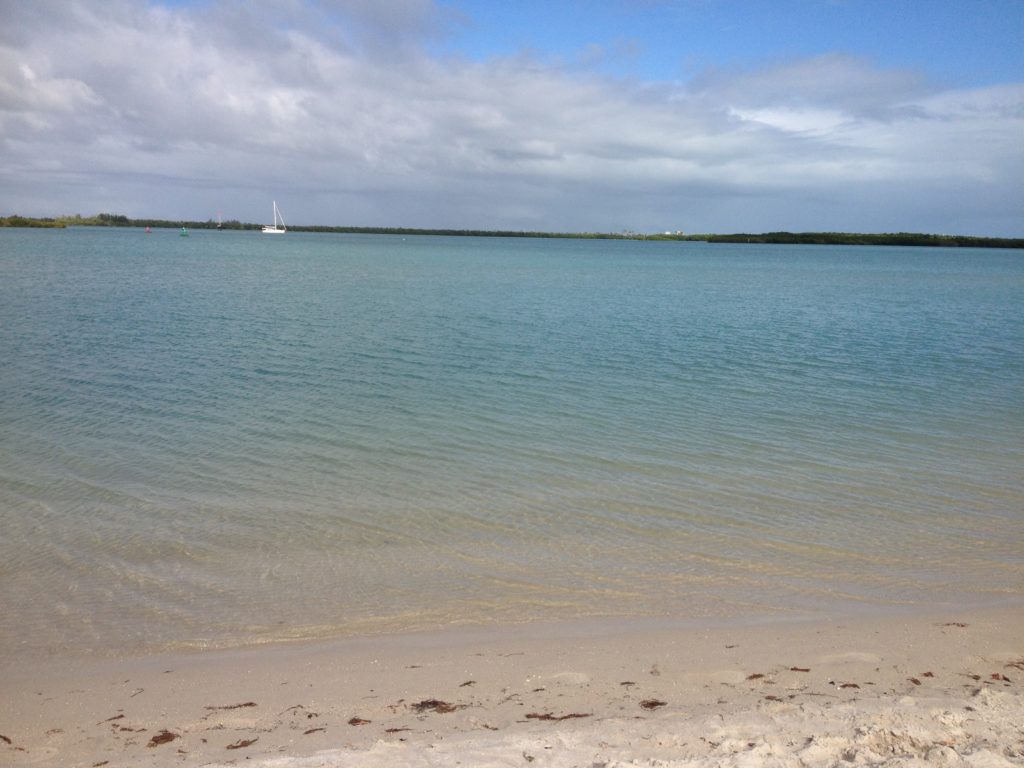 The obligatory “it’s 18 degrees out in Maryland but 75 in Florida” photo. 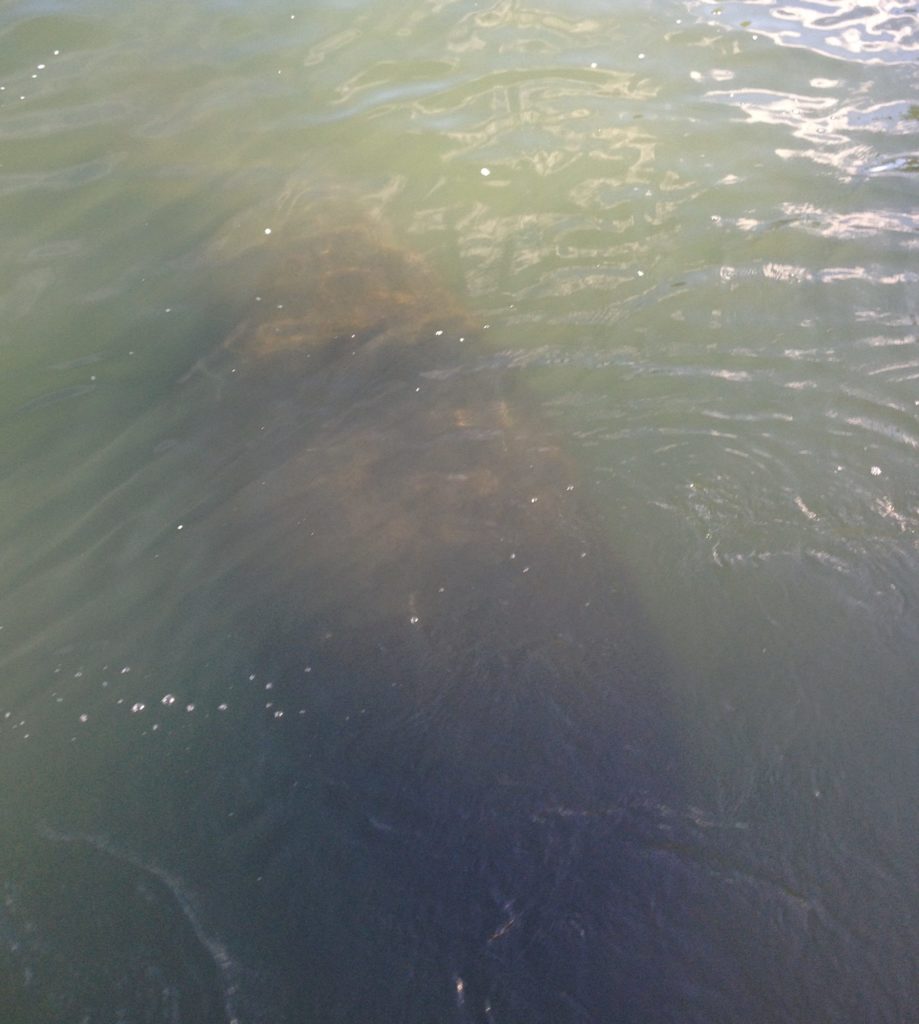 Manatees are definitely a success story of the Endangered Species Act. They’re as common as squirrels in the Indian River Lagoon.

Cownose rays proved to be extremely abundant during the first half of the trip.  One gillnet set only soaked for one minute before splashing at the surface alerted us that it was already full of rays.  Clearly our hypothesis that cownose rays were overwintering here in large numbers was correct.  Everything we caught was identified and measured, and cownose rays in good condition for tagging were placed in an onboard live well while we freed the rest from the gillnet.  Each of the “chosen” rays was transferred to the surgical suite (a literal kiddie pool used to keep water over their gills and spiracles) and an acoustic tag was surgically implanted into their body cavity.  These tags will be detected on acoustic receivers deployed all along the Atlantic coast for the next six years, hopefully giving us a complete picture of their migratory behavior.  We managed to tag 11 rays in our first two days on the water, including a 3.4-foot wingspan bruiser of a male who was scarred from a previous encounter with a large shark.  Four juvenile bull sharks also made an appearance, but were released untagged due to the incredible number of rays that had to be processed. 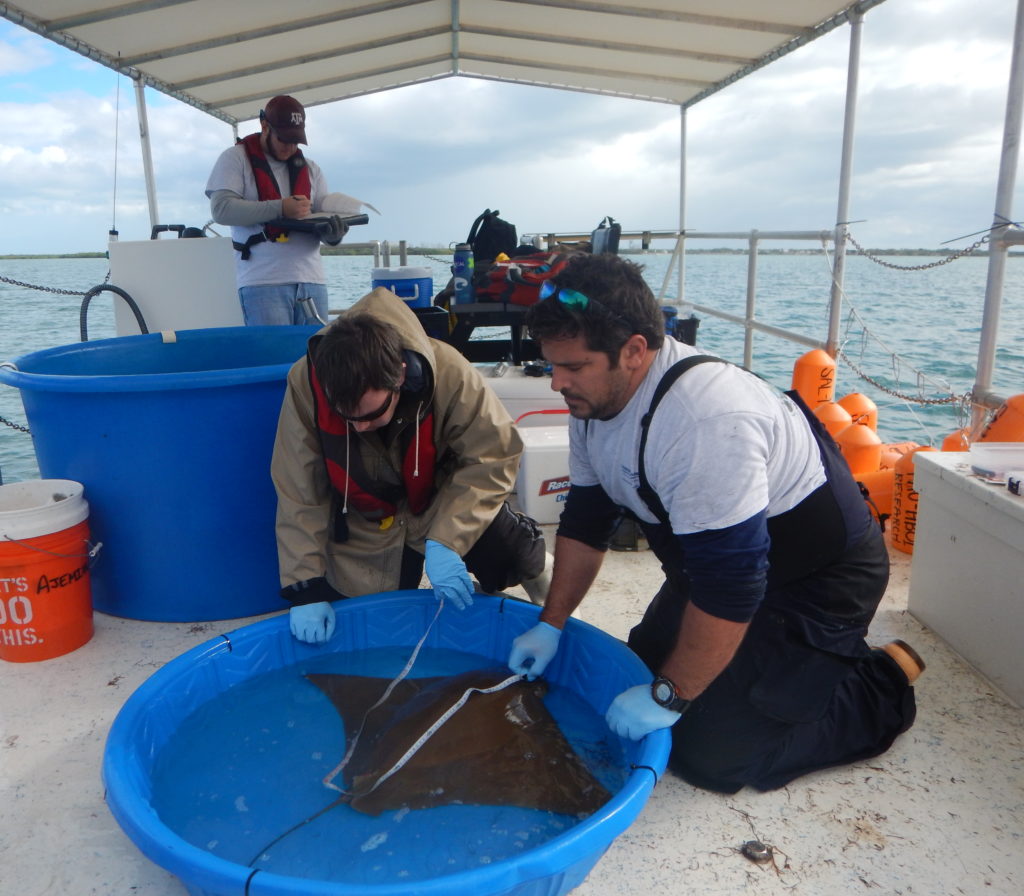 Taking measurements on a cownose ray before tagging. The large blue bin in the background was our live well, and could hold up to seven rays at once. Photo: Mike McCallister. 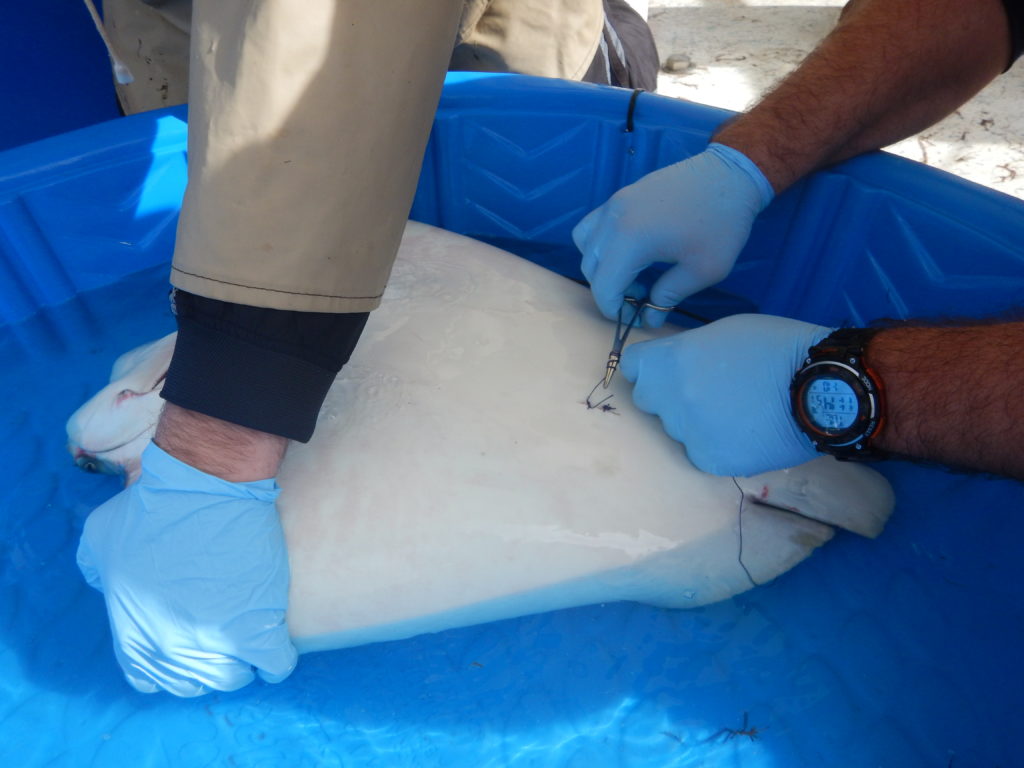 Stitching up a cownose ray after implanting an acoustic tag. The tags and all tools are sterilized to prevent any infections from the surgery, and an interrupted stitching pattern is used so the wound remains closed even if one individual stitch fails. Photo: Mike McCallister.

With our cownose ray objectives satisfied, we turned our attention to tagging bull sharks.  Perhaps overconfident after encountering so many sharks as bycatch while tagging rays, we were surprised when all the elasmobranchs in the estuary seemed to disappear.  After spending a day and a half searching for sharks and mostly finding gafftopsail catfish, I was starting to feel the opportunity to tag bull sharks slip through my fingers.  The very last gillnet set didn’t offer much encouragement as it came up choked with red algae.  Then we noticed a large grey form laying in the net, barely snagged by a pectoral fin.  Success came in the form of a 5.6-foot long female bull shark, right at the size at which bull sharks stop spending a lot of time in the Indian River Lagoon.  This was a perfect shark to tag, as her track might show us the transition from juvenile to adult movement patterns. 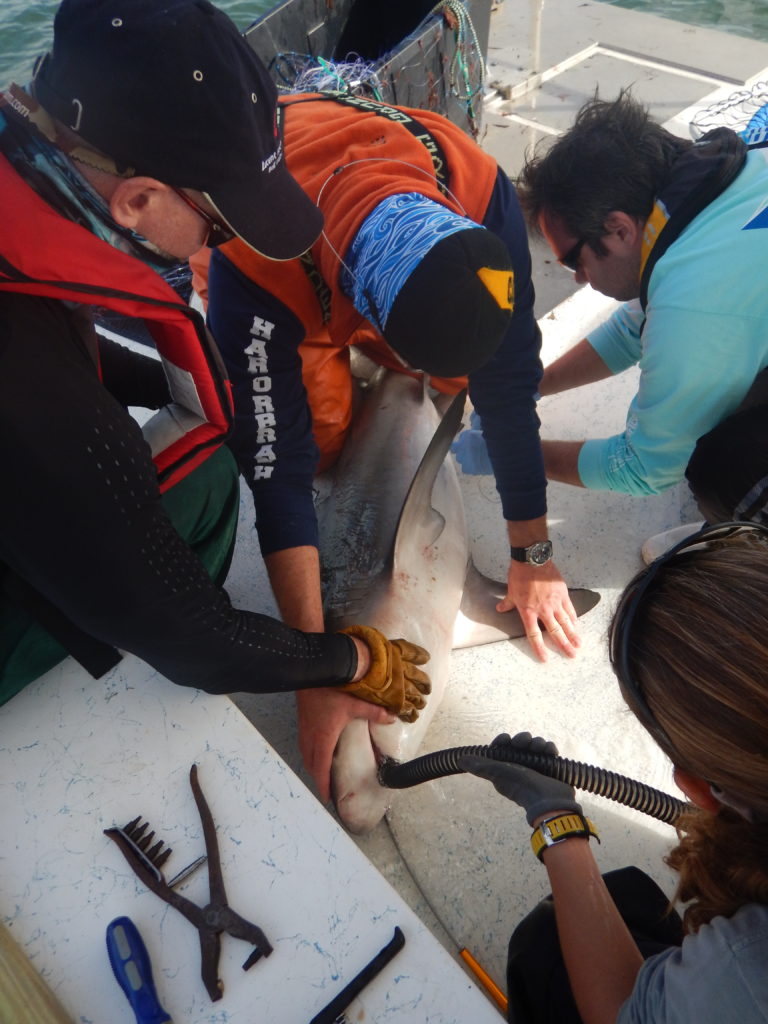 Unlike the cownose rays, which could be kept in a live well until it was time to tag them, sharks need to be processed and returned to the water as quickly as possible. The crew basically functions as a racing pit crew in these situations, with each person taking on a different task. With a shark this size, one important job was holding it down long enough for tonic immobility to set in. Photo: Matt Ajemian.

The reason we couldn’t tag the previous sharks is that rays and sharks have very different tolerances for being on the deck of a boat.  Rays can handle being immobile and even out of the water for extended periods of time, so they could be kept in the live well while we finished pulling in the net.  Sharks, however, need water flow over their gills and capture stress can have serious health consequences for them, so they need to be tagged and released as soon as possible after capture.  Fortunately everyone onboard was experienced with handling sharks and functioned as a well-oiled machine, holding down the shark long enough for tonic immobility to set in, inserting a hose into the mouth to maintain water flow over the gills, and prepping the surgical equipment.  Then there was me, the surgeon.

We deployed a tag on this shark that included a temperature sensor so we could get a little more information on habitat preferences wherever she’s detected.  In keeping with the tradition started with Paul, this shark was given a name appropriate to the circumstances of its capture.  So with that I’d like to introduce Rhody, named in reference to the sheer amount of red algae (also known as Rhodophyta) she was caught with and also my undergrad alma mater.  Like Paul, she had a flair for the dramatic and showed up in the very last set on our very last day on the water, after resignation that we wouldn’t be tagging any bull sharks had set in.  If there’s anything I’ve learned from bull shark tagging so far it’s that the best bull shark bait seems to be despair.  It was definitely a quality over quantity shark tagging effort, one that established a great new partnership with the Ajemian lab at Harbor Branch, and ended my week in Florida on a high note.  Now we get to see where she goes.

Rhody the bull shark is ready to go just prior to release. Photo: Matt Ajemian.

Thanks to everyone who made this trip possible, especially Matt Ajemian and Mike McCallister at FAU Harbor Branch for hosting this whole operation.  Thanks also go out to Jeff Beal (who helped inspire Rhody’s name), Kristine Stump, Cameron Luck, Breanna DeGroot, and Tyler Harrington for help wrangling gear and elasmobranchs.  Twitter users should make sure to follow the SERC Fish and Invertebrate Ecology lab (@fishinvertlab) for fish research news from the Chesapeake (including more Movement of Life updates), and Matt (@DrHulkFish) for more science from the Indian River Lagoon.