My summer-long (likely into a little bit of autumn) quest to find sharks in the Pamlico Sound took me to the waters of the Neuse River this past Thursday.  I’ve been out on the Neuse looking for sharks on a couple occasions before, and it was time to see if my gear and a few new techniques could find some sharks where we hadn’t before.  We had the longline and gillnet both available and were fishing an afternoon/evening set to see if we could hit the twilight hours when sharks are at their most active.  We also opted to set the gillnet first, set and haul the longline while watching the gillnet like a hawk (in case something big hit it that needed a quick release) and then haul the net, which gave us a longer soak time for the gillnet.  Did these new ideas help us find any sharks in the estuary?

We hit the water by 3:30 and were setting the gillnet at 4:30.  The idea was to fish some of the daylight afternoon hours, get a set or two in as the sun was setting, and then do at least one true night set, which is pretty much exactly what happened.  The weather held for us for the most part, though the wind randomly picked up and things got a little interesting as we were making the first longline set.  The wind also whipped the end of the gillnet around the anchor line, creating yet another annoying knot that knocked it out of commission for the rest of the day (we will be using a different anchor/buoy line setup in the future to make sure this never happens again).  Still, we got one good soak out of the net and several longline sets. 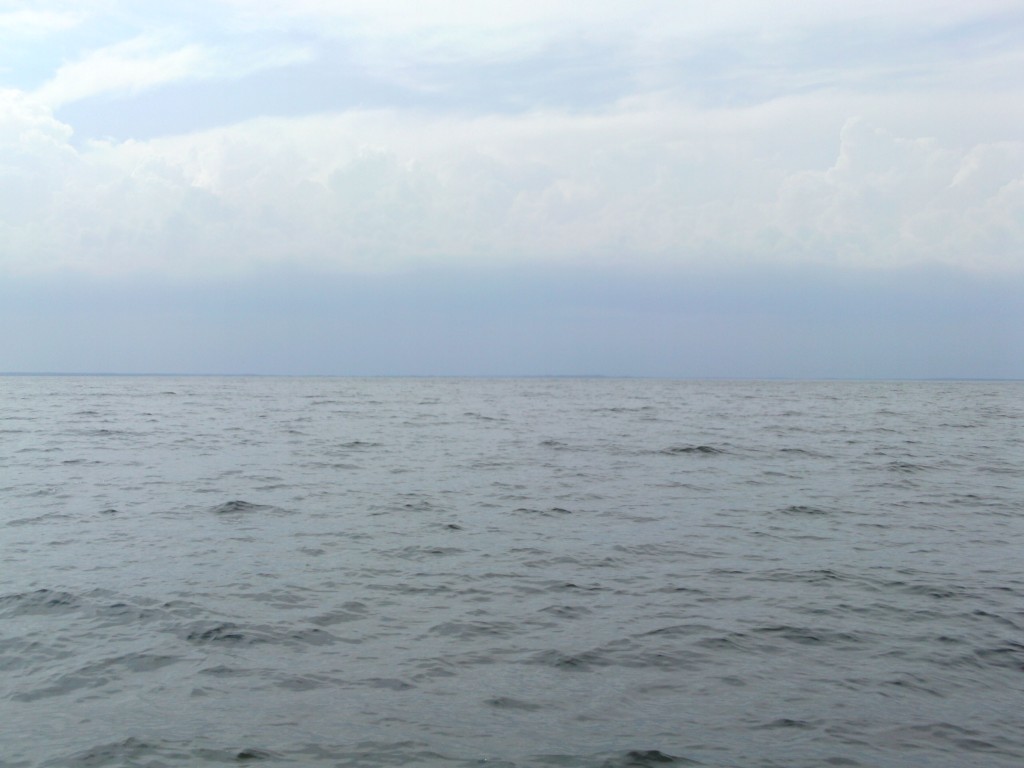 Obligatory weather shot. A band of thunderstorms that apparently walloped everything north of us sent us some bad wind for about half an hour, but we really dodged that bullet and had pretty pleasant waters overall. 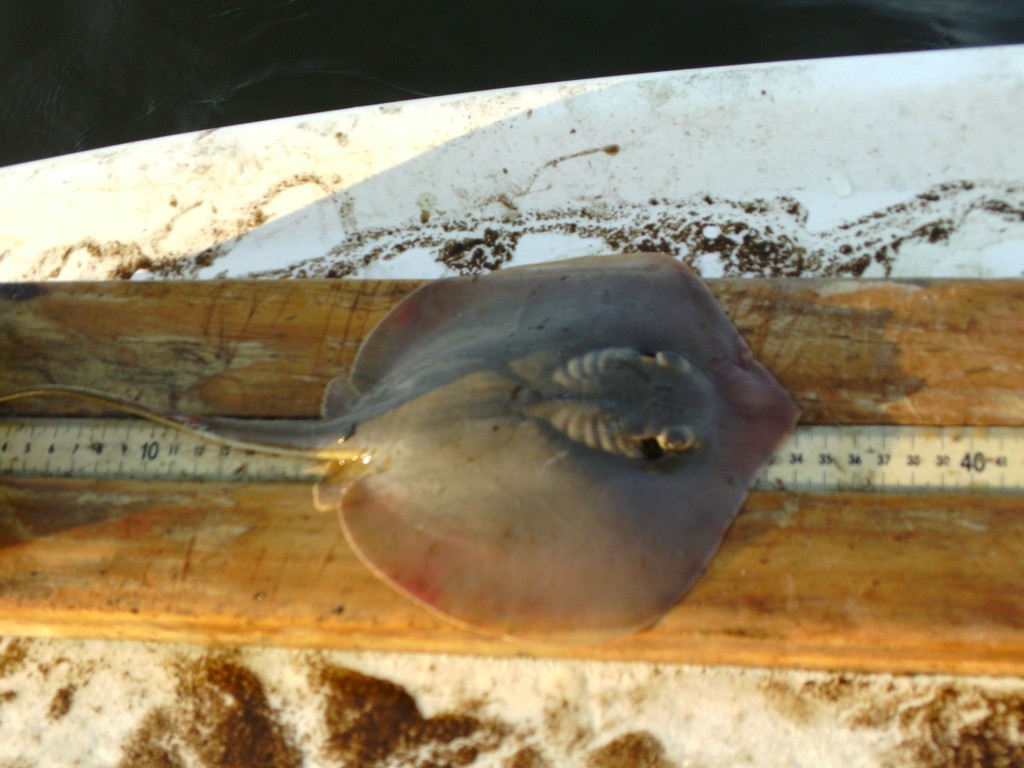 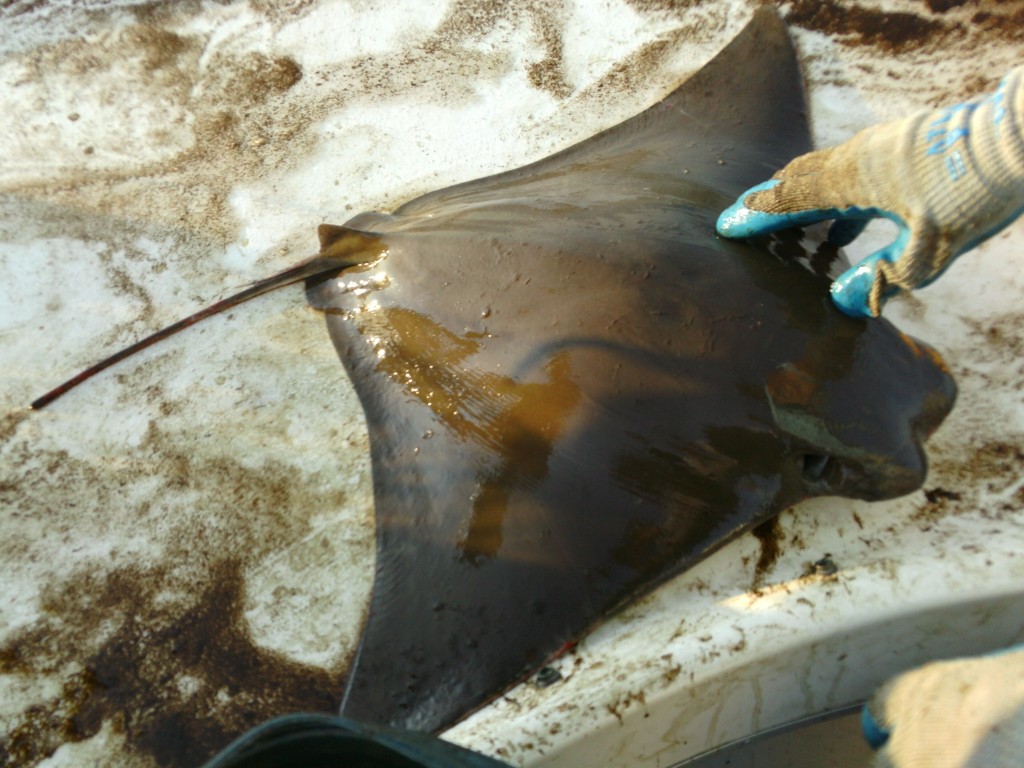 This subadult cownose ray likely masses about the same as a lot of the juvenile sharks we’re after, which is reassuring evidence that the net can handle small sharks. Also note that something has bitten the end of its tail off. 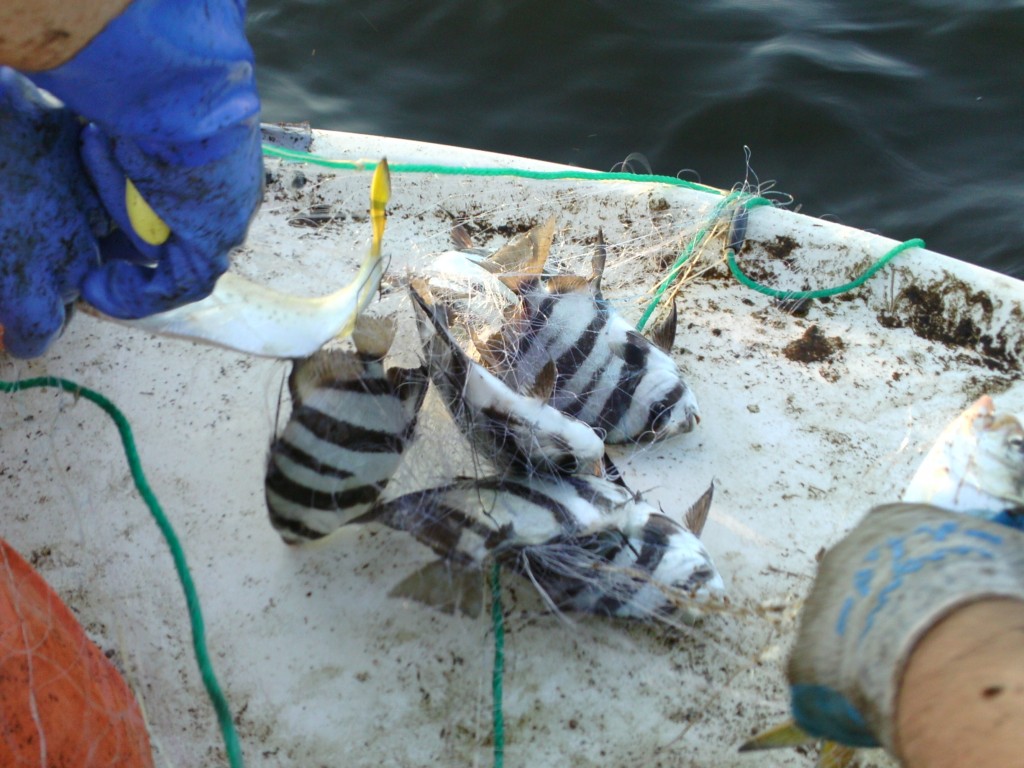 There wasn’t any evidence of any bottom structure other than a drop-off, but this station was loaded with spadefish. This section of net had enough to provide every NC Aquarium location with a mascot.

Having a longer soak for the gillnet allowed it to catch a lot more fish than it normally does, though it was really only in the water for about half an hour longer than before.  This still allowed it to catch its first elasmobranchs of the survey; a subadult cownose ray and a pretty cute juvenile Atlantic stingray.  It also pulled up a high diversity of potential prey species, including lots of menhaden and spadefish (surprisingly, since they are usually a reef-associated species and this was, as far as we could tell, a mud bottom), a couple searobins and weakfish, a handful of crabs, and most importantly no jellyfish.  Nice work, gillnet.  Mortality among the gillnet-caught fish was nice and low with the exception of some of the menhaden, which we used to supplement our bait supply. 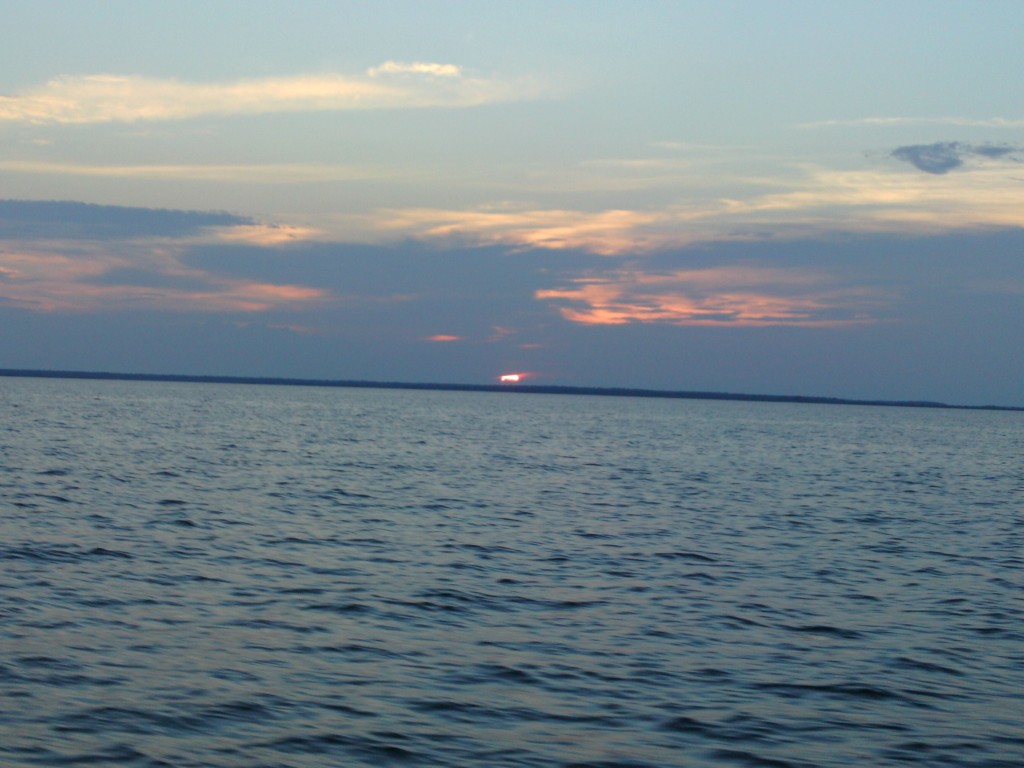 Then the sun set. 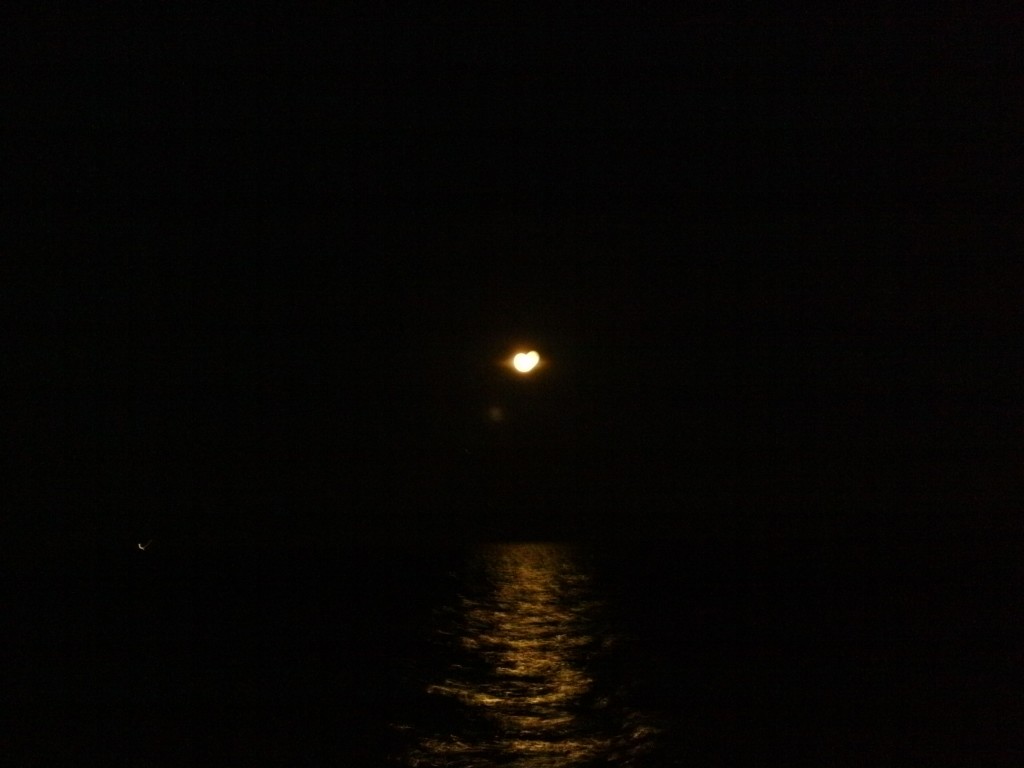 And the moon rose.

Our next longline set started right at sunset, and it was starting to get dark out when we tossed to end buoy.  During retrieval, the line definitely had that telltale tug that gives away the presence of a hooked fish.  At the very least, we wouldn’t end the night totally skunked.  Even better, whatever was on the line felt big and was fighting pretty hard. 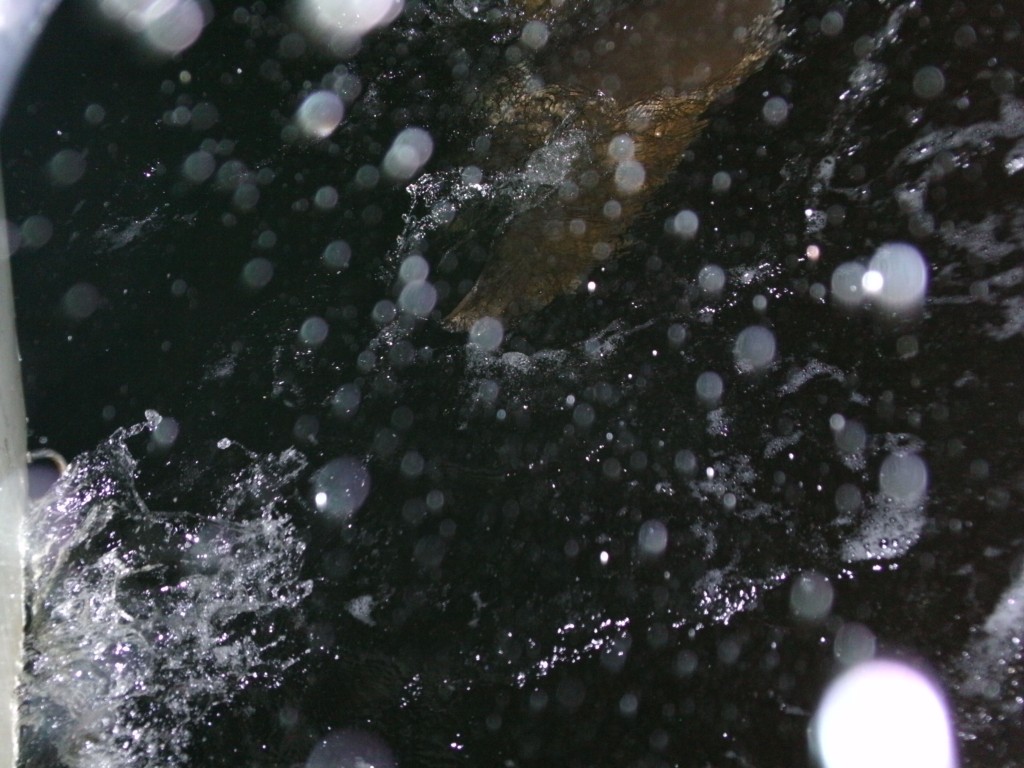 Action shot of a large creature coming up on the longline. 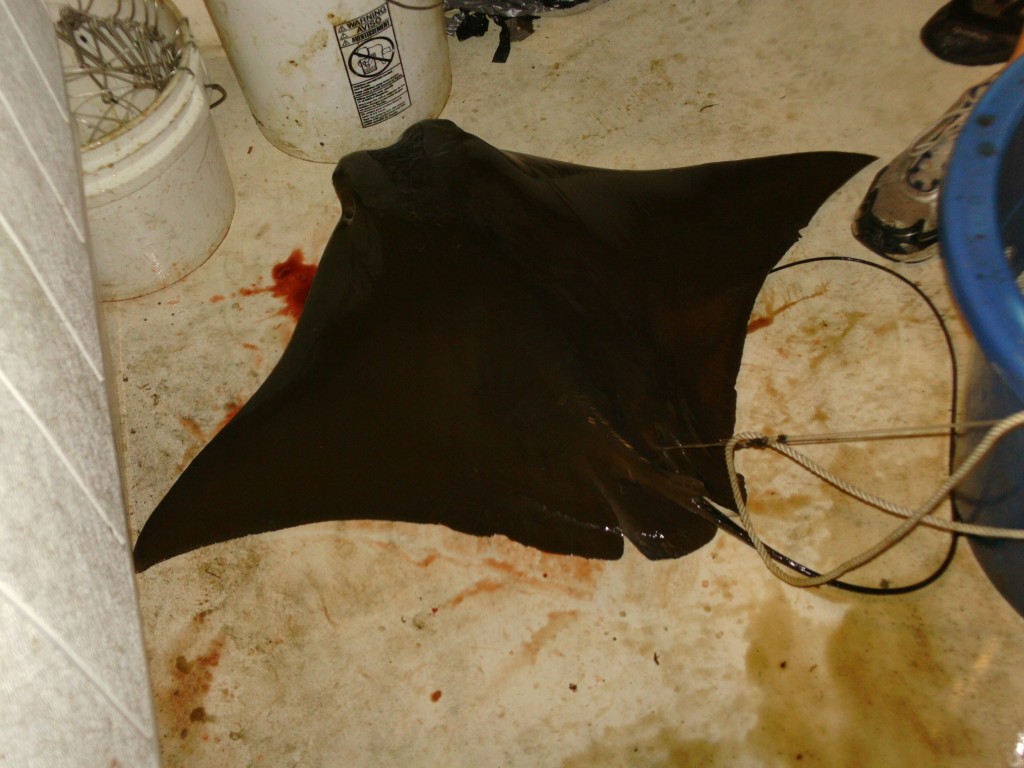 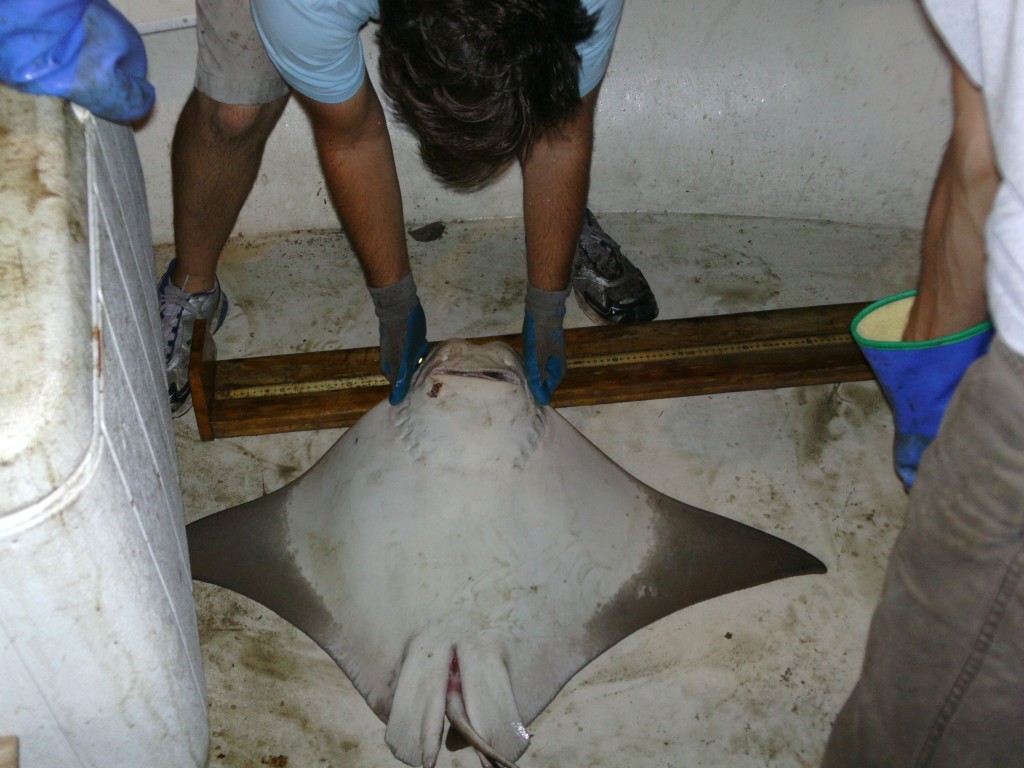 We caught several large cownose rays on this set. Fortunately, like many elasmobranchs, these rays go into tonic immobility when on their backs. This allows for a much easier time de-hooking and measuring them before releasing them back into the depths.

Well, even if the sharks weren’t on the move during the sunset set, the rays certainly were.  We caught and measured several large cownose rays and one adult-sized Atlantic stingray.  If nothing else, I’ve managed to design a pretty decent batoid survey.  We did have one leader get destroyed by something, which is intriguing considering the leaders are doubled-up 200lb-test monofilament.  Something big must have visited the longline.

The final set was put out after 11 p.m., a true night set.  As we retrieved, the line definitely felt heavier than usual, and had some of the rhythmic tugging we’ve come to recognize as a sign something alive is on it.  Another large cownose came up, but still the line remained heavy.  Finally we reached a point where the mainline was pointed straight down beside the boat, and whatever was on it had actually pulled the leader clip into the next one.  These clips fit very tightly around the line and none of the big rays had even made one budge.  I had to get Evan and Andrea to help me haul the leader in, and we kept facing down into the murky Neuse water, expecting at any moment to see a huge shark eye staring back at us.

Instead we caught this.

There are many words stronger than “disappointed.”  “Disgusted,” for example.  I’ve always been a fan of “gutted,” which is popular with the English and the Aussies.  I can honestly say that all of us were thoroughly gutted at the sight of a derelict crab pot where we had hoped to see a bull shark large enough to tax the gear.  At least we did a good deed by bringing this hydrozoan-covered disappointment back with us to dump in the trash at the boat launch so hopefully no one else would share our experience (and to prevent it from ghost fishing).

Though we got hosed by that crab pot, I’d consider our first night trip a success.  The juvenile sharks are still eluding us, but we never expected huge numbers of them up in the Neuse.  Other elasmobranchs are clearly more active after dark, so at least there was something to catch and record.  The gillnet acquitted itself well, catching a good number of fish and proving that it can handle mid-sized rays (and potentially sharks around the same size).  Thanks to the steady supply of batoids, we got some valuable practice for our procedures for de-hooking, measuring, and releasing the catch.

I think night trips are going to be standard procedure from here on.  I’ll be taking a couple weeks off to head to AES and then family vacation, but when I get back we’ll be taking our talents to a spot where the NCDMF has been running into sharks consistently.