Well, that brief break from blogging escalated quickly.  Between a number of housecleaning tasks (both literal and metaphorical) and the onset of field season, I managed to let an entire month slip by without posting.  Which is not to say post-worthy things didn’t happen.  To prove that point, here is the first of many (hopefully more promptly-posted) field work recaps from this summer’s shark chasing.  Warning: a couple of the images in this post depict the after-effects of attempted shark-on-shark predation and may be a bit much for some readers.

We optimistically started sampling in late March, during my days off from running a study on the daily feeding ration of spiny dogfish.  Spiny dogfish were exactly what I was expecting to get so early in the season, with some smooth dogfish, cownose rays, and juvenile sandbar sharks potentially thrown in.  What I actually caught was… nothing.  The erratic early spring weather seemed to have chased every marine organism out of of Back and Core Sounds.  The local marine life started to wake up a little more in April, and most importantly the weather began to show some sort of consistency.  Sharks were still nowhere to be found (including coldwater species like the dogfish sharks), but the first scattered rays began to appear and potential prey species were being caught in the gillnet. 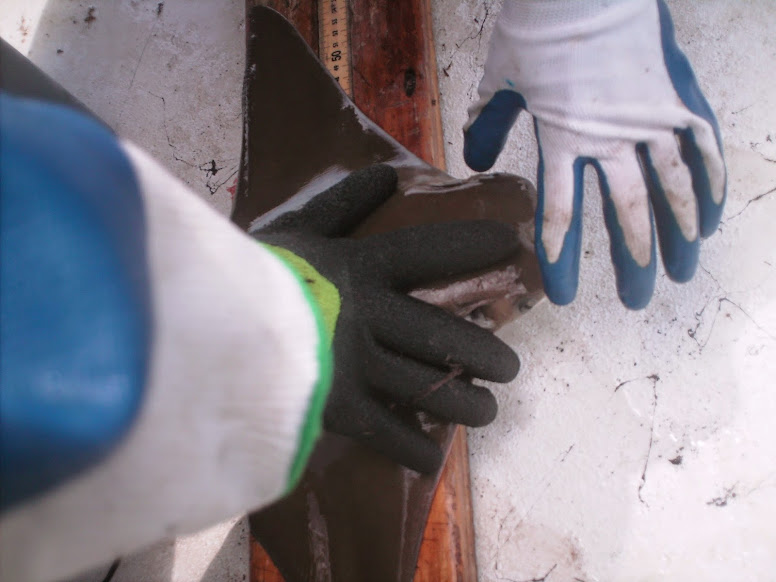 This juvenile cownose ray is the official first elasmobranch of the 2014 field season.

Things were starting to look up by the end of April, but I was low on bait and questioning the wisdom of starting sampling so early.  Then in May the weather surged forward into summertime conditions, causing everything to migrate in and out of the sound at once.  Winter species were leaving late and summer species arrived early, leading to some very interesting catch combinations.  Spiny dogfish did finally show up in May, as did the influx of adult smooth dogfish a month later than predicted.  Up in Core Sound, two newborn-sized bull sharks were captured within a foot of each other in the gillnet, but both managed to escape alongside the boat before they could be measured or photographed.  That near miss is likely to haunt me for a while.  The diversity of rays also increased; cownose rays became a lot more common, and bullnose and bluntnose stingrays also began to make appearances. 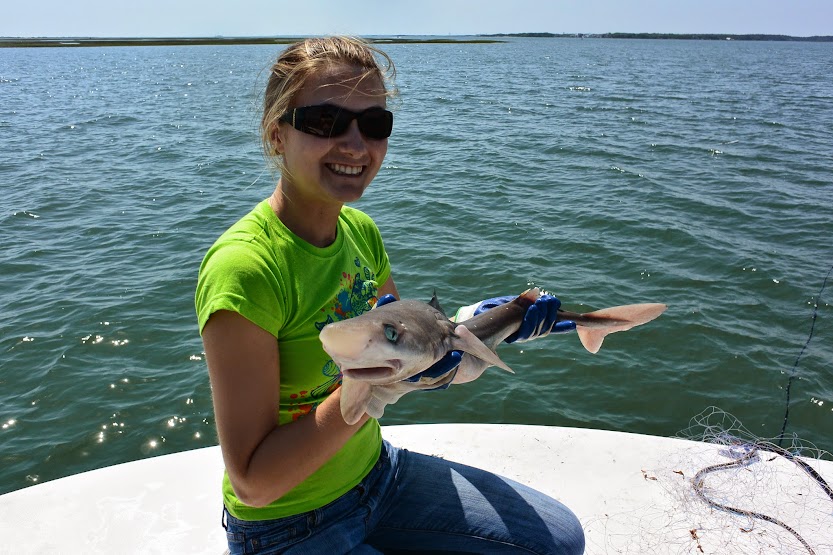 This late-season spiny dogfish is just thrilled to be part of the inshore shark survey. 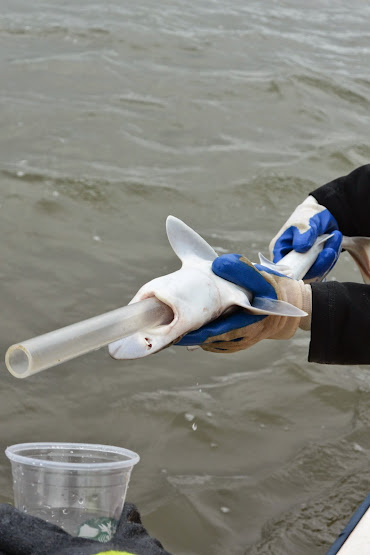 Non-lethally (but I’m sure not comfortably) sampling stomach contents from a juvenile smooth dogfish. 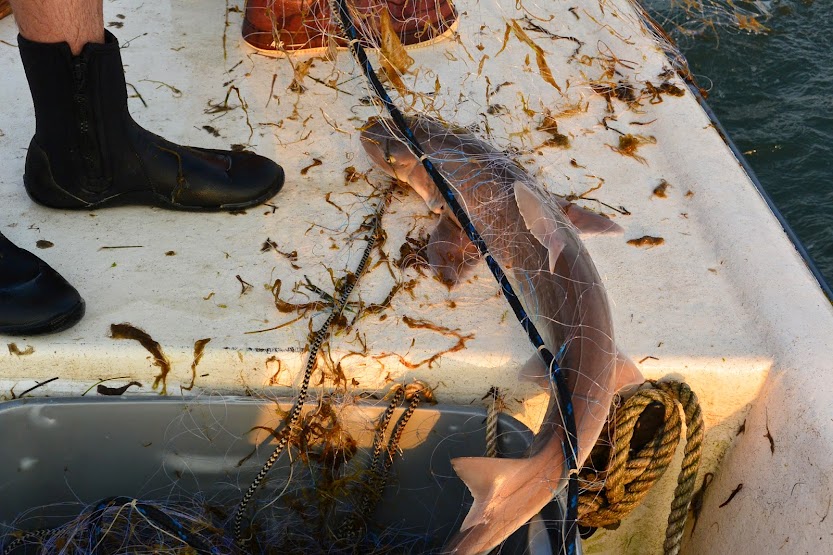 Adult smooth dogfish were in the area in May.  Both males and females were present.  The females were likely dropping off pups, but I wonder what the males were up to? 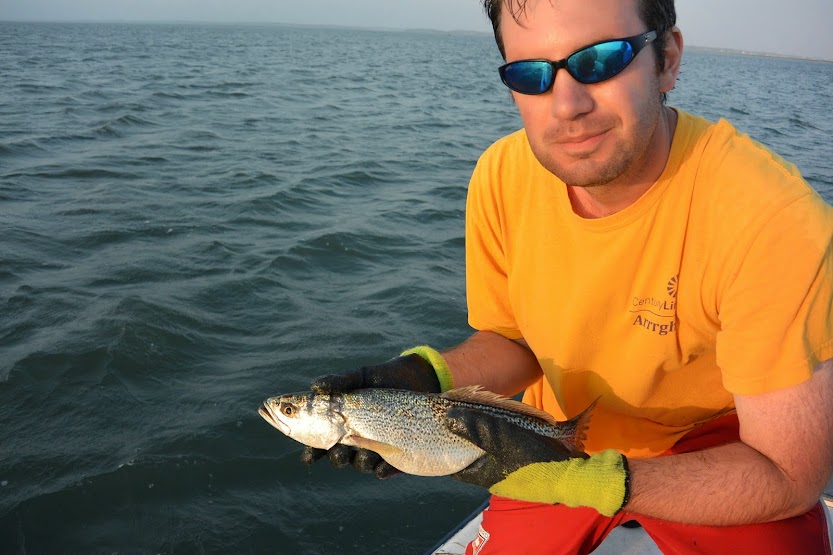 The catch wasn’t all sharks. This good-sized weakfish was likely on its way out of the estuary for the summer. 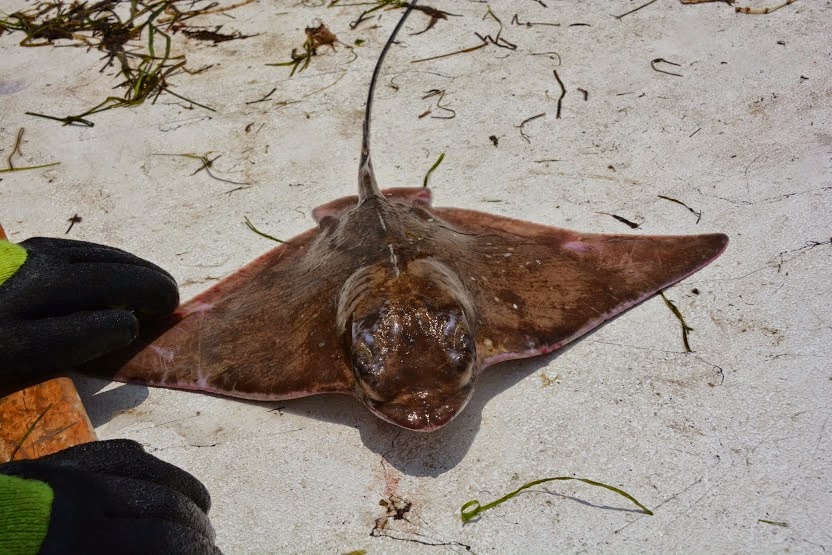 Bullnose ray, a relative of the cownose ray that was also fairly common in May. 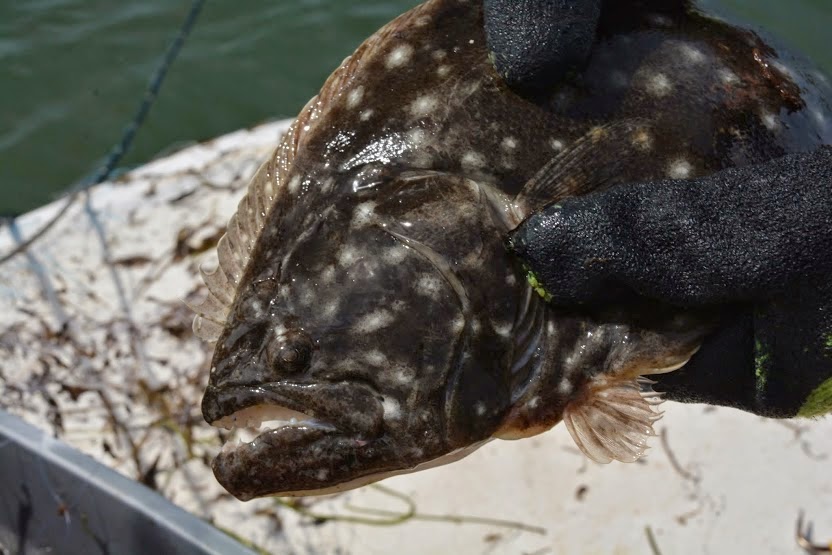 This might be the only keeper-sized flounder I’ve caught since moving to North Carolina. I was a good sport and released it alive.

By around mid-May, the sharks truly arrived.  The first nighttime longline set of the year brought up two large blacknose sharks, one of which another, larger shark had very recently tried to make a meal of.  The first Atlantic sharpnose shark was also captured in this set and confirmed Back Sound as a nursery area for the species as she gave birth on the deck.  I helped deliver and release two adorable newborn pups and released the mother in good shape to finish dropping off the rest of the brood.  This was not only an amazing event to witness but also gave us a definite size at birth for the local sharpnose sharks.  Plus, now I can add “shark midwife” to my CV. 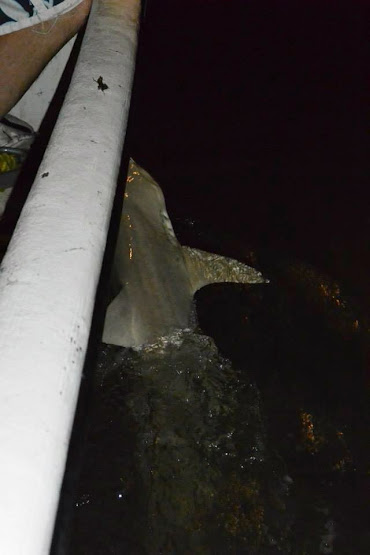 Bringing a large blacknose shark up to the side of the boat. 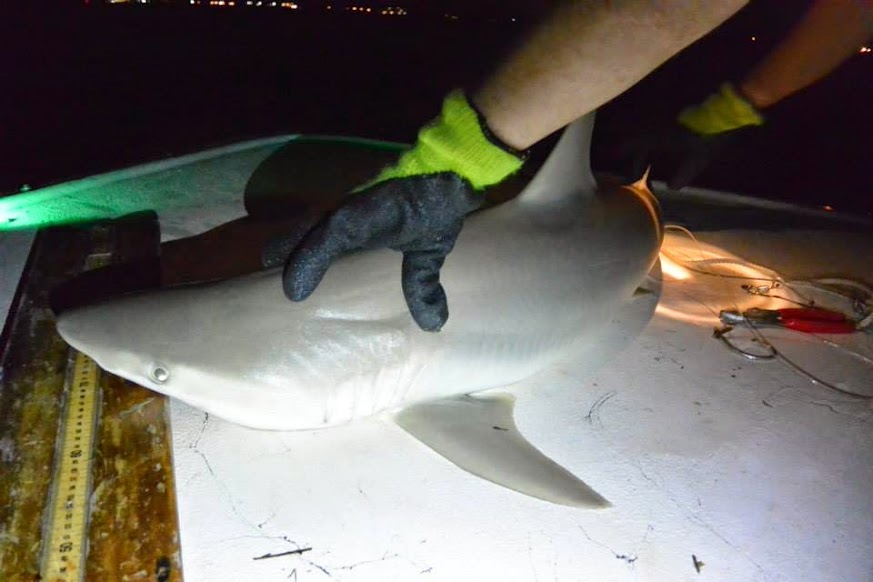 The first blacknose shark of the night. This shark was longer than the fish board used to measure it. 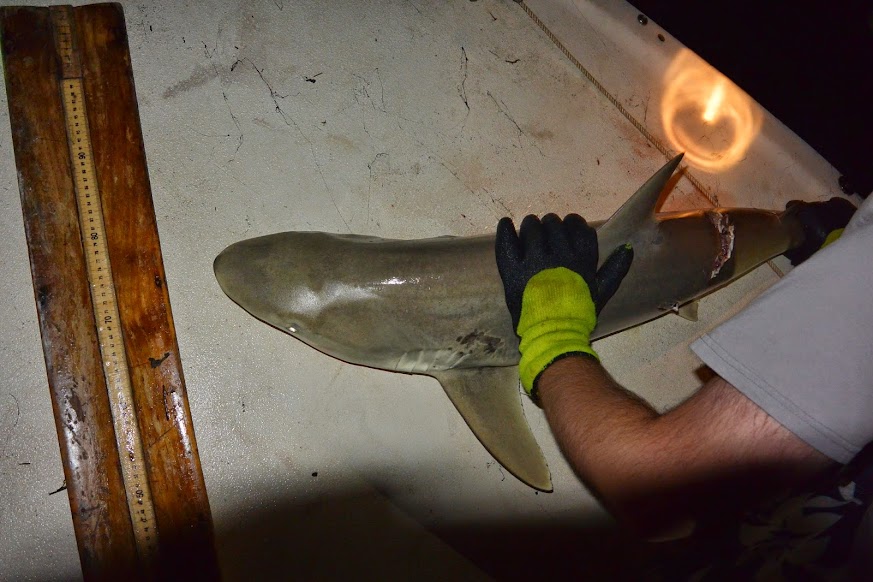 At 4.2 feet, the second blacknose shark was the largest shark caught during the survey so far and SOMETHING BIGGER TRIED TO EAT IT. 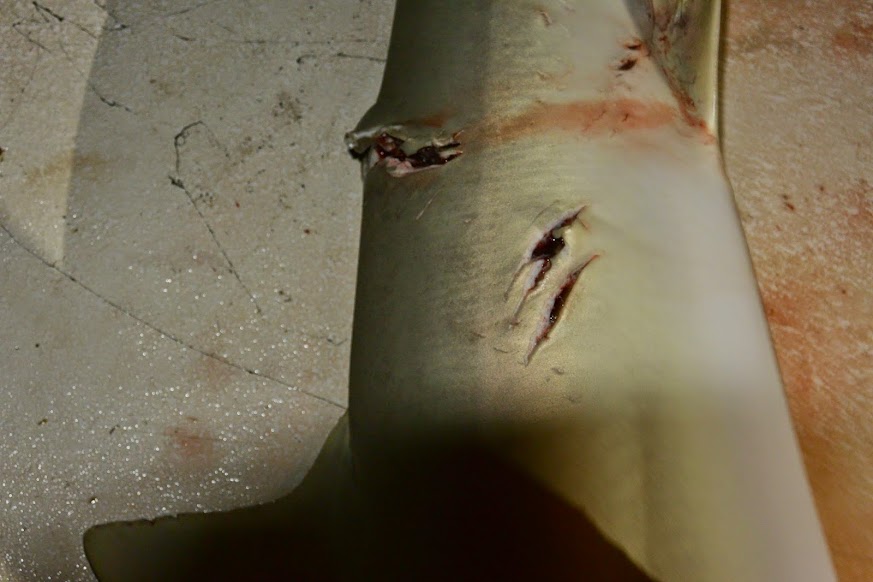 A close-up of the wounds on the blacknose shark. I’m still in the process of trying to ID the source of these bites. Amazingly, this shark was still able to move its tail and swim so we let it go to give it a fighting chance. 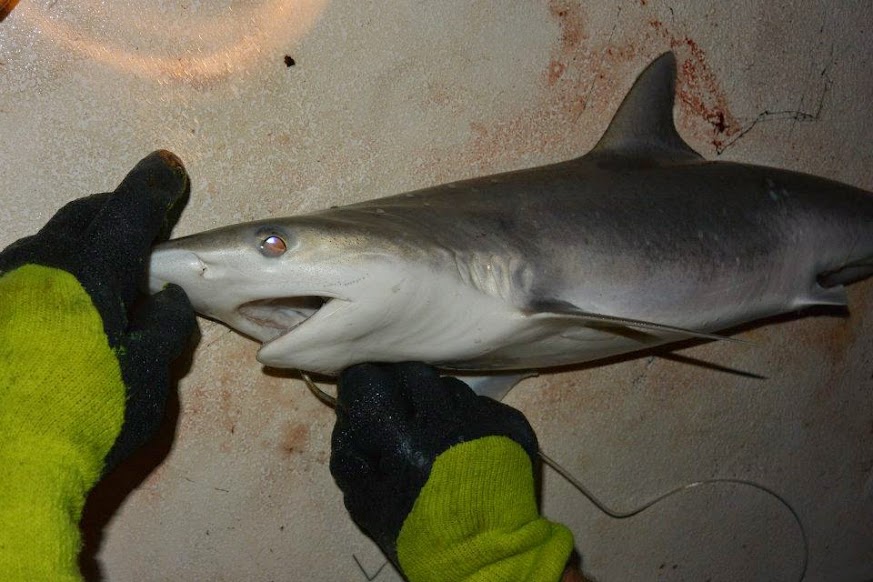 This adult female sharpnose shark had a surprise in store for me. 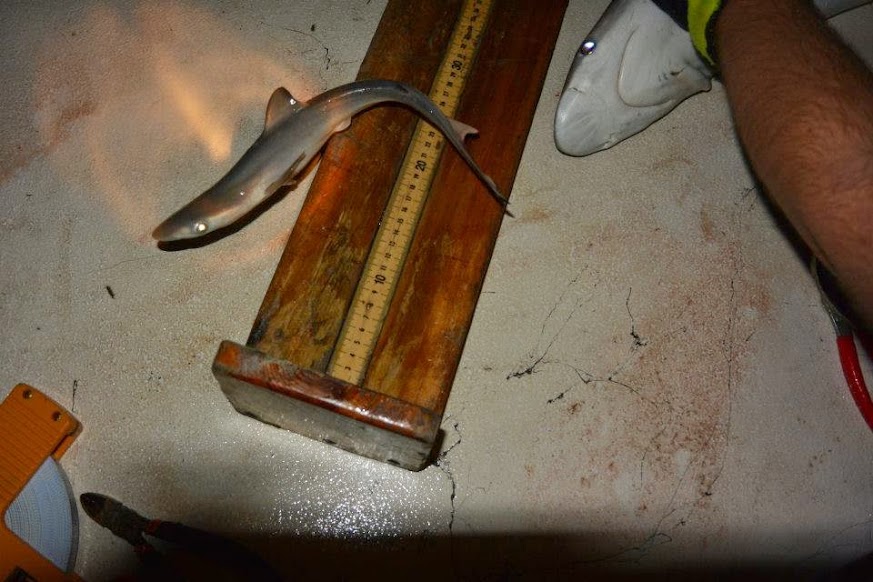 Surprise! This freshly delivered Atlantic sharpnose shark pup gets its measurements taken as mom looks on. Both of the pups I delivered were released in good shape and so was the mother. 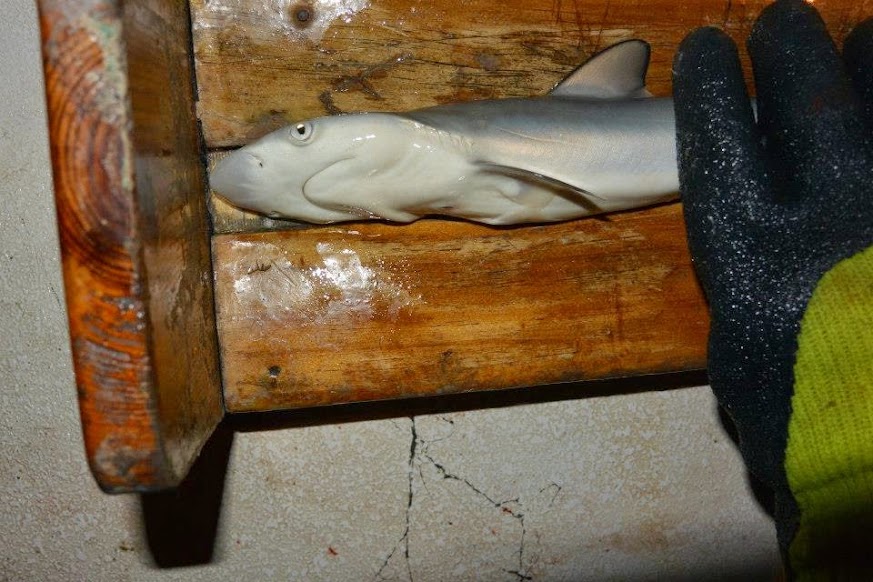 They certainly are cute.

We had strongly suspected that Atlantic sharpnose sharks were giving birth within Back and Core Sounds after young-of-year sharks dominated the survey catch last summer, but to get such a definitive confirmation was awesome.  The sharpnose sharks were not done with us though.  By late May adults of both sexes were a common catch.  But why?  It was obvious the females were entering the sound to give birth, but why were there so many males?  Is mating immediately after giving birth common among smaller shark species?  These are among the questions we hope to answer with this survey. 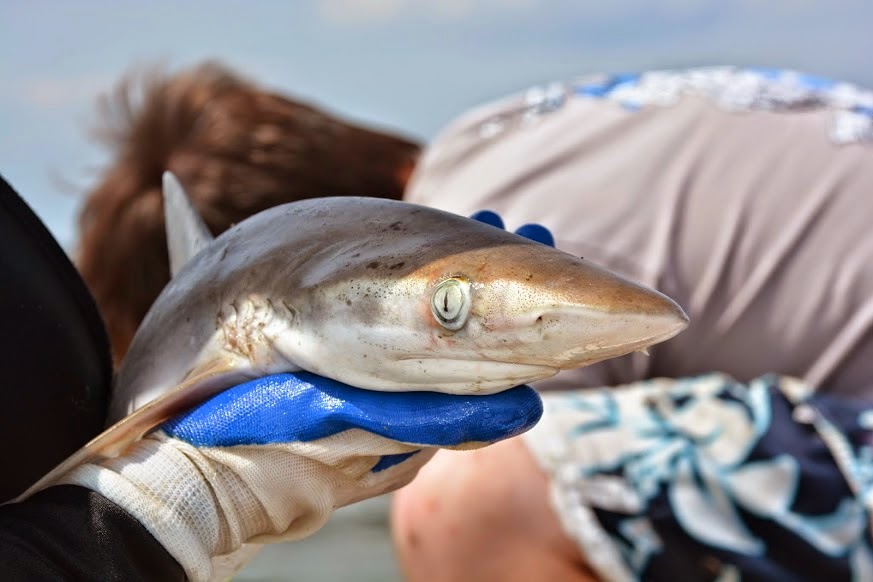 Adult sharpnose shark captured in Core Sound. We didn’t catch any adults at all during last year’s sampling. Will they disappear as the summer goes on this year?

A highlight of late May sampling was encountering a huge pod of bottlenose dolphins actively feeding in Core Sound.  Interestingly, we captured several sharpnose sharks in the same set just before the dolphins appeared.  Were the sharks and dolphins after the same prey? 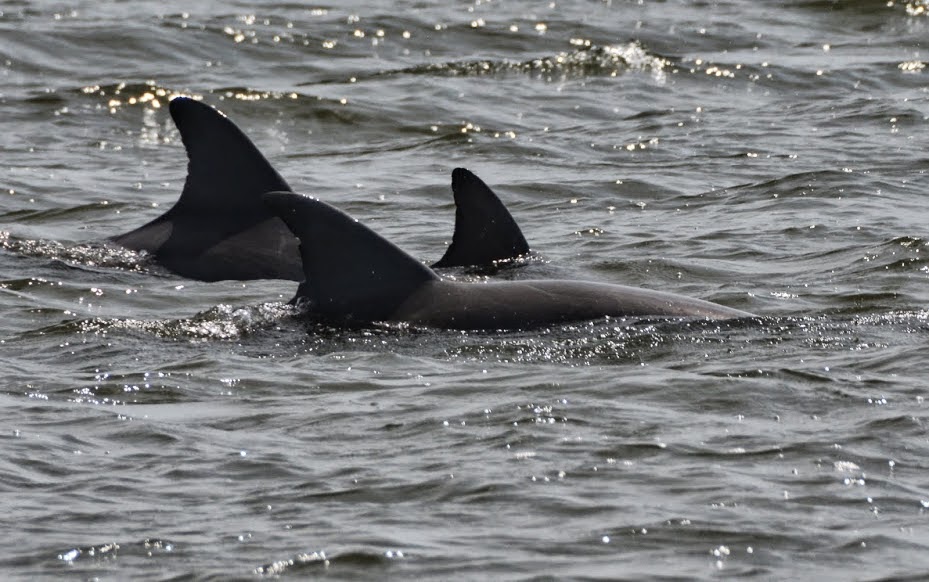 Three of what may have been up to about 40 bottlenose dolphins actively feeding near the boat in Core Sound. 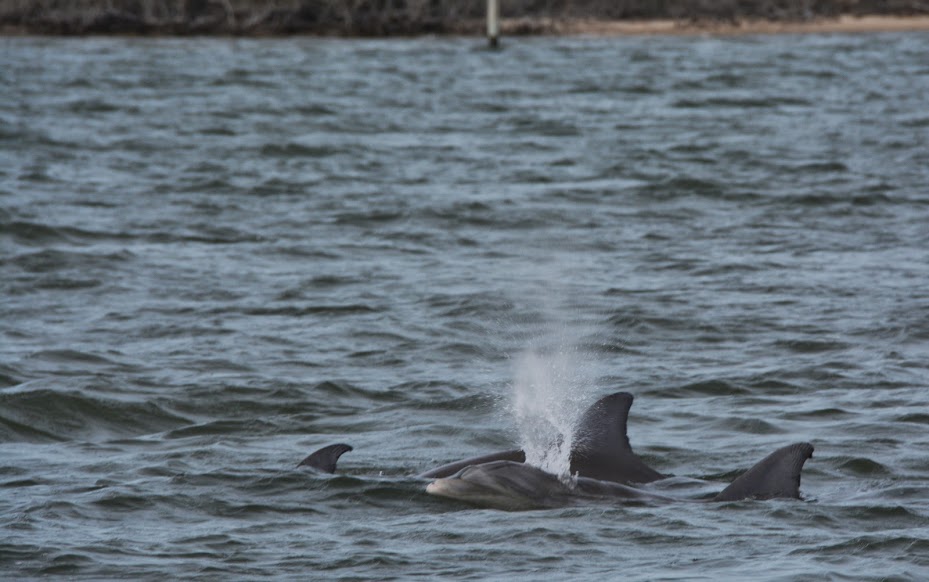 Thar she blows! The presence of dolphins is worth noting, because they may be competitors with small and medium-sized sharks and prey for the really big ones.

That wraps up the spring field work recap.  The next field post will cover the whole month of June then hopefully I can start cranking these out after every other trip or so.  Hope you enjoyed this rundown of the summer so far.

Thanks go out to colleagues Cecilia Krahforst and Steven Lichti for the majority of the photos in this post.