As mentioned earlier, this summer I’ll be starting the first of several shark-related projects that should (hopefully) add up to my dissertation.  The first is a summer pilot study that aims to find shark hot spots in Pamlico Sound.  Tomorrow, before the crack of dawn, field work officially begins.  I’ll be titling posts about field work “Summer of the Shark,” because that’s certainly what my summer has been so far and will become even more so in the next couple months.  Since I won’t have any pretty pictures of sharks until I get back on Thursday, enjoy this rundown of the gear I’ll be using.

The goals of tomorrow’s sampling are to 1.) get used to the gear and see how well it works), 2.) document and take measurements on any juvenile sharks present, and 3.) finally get out of the office.  The plan, patterned after the basics of the South Carolina shark survey, is to run a gillnet and longline simultaneously to account for species that are more susceptible to one gear than the other.  Both the gillnet and longline are 300 yards long.  The gillnet is 10 feet deep with 4.5-inch mesh, to get some of the smaller juveniles from species like sharpnose sharks and smooth dogfish while still potentially snaring larger species.  The longline will consists of 50 size-12 circle hooks with 200 lb test mono leaders.  This survey is focused on catching juveniles, and frankly I’m not 100% sure we want to have to handle anything larger than 200 lbs. (this shark, for example).  That said, if a monster bull or tiger shark wants to hang onto the hook, we will gladly take data on it. 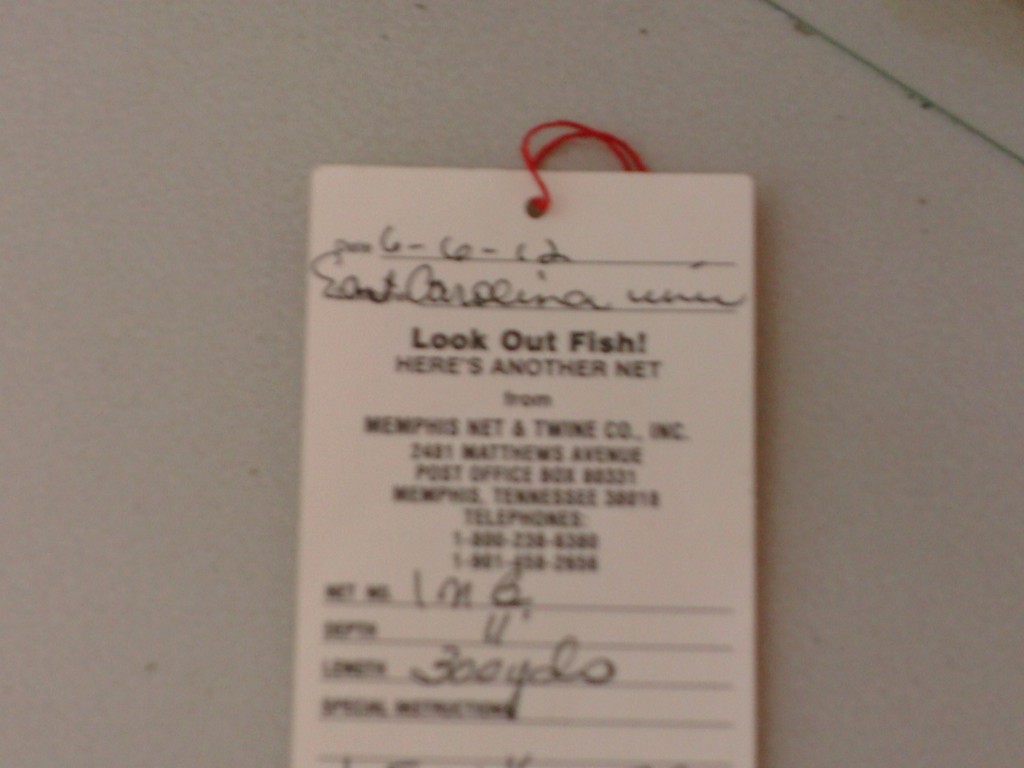 We ordered this net from Memphis Net and Twine, who included this tag. Look out fish, indeed. 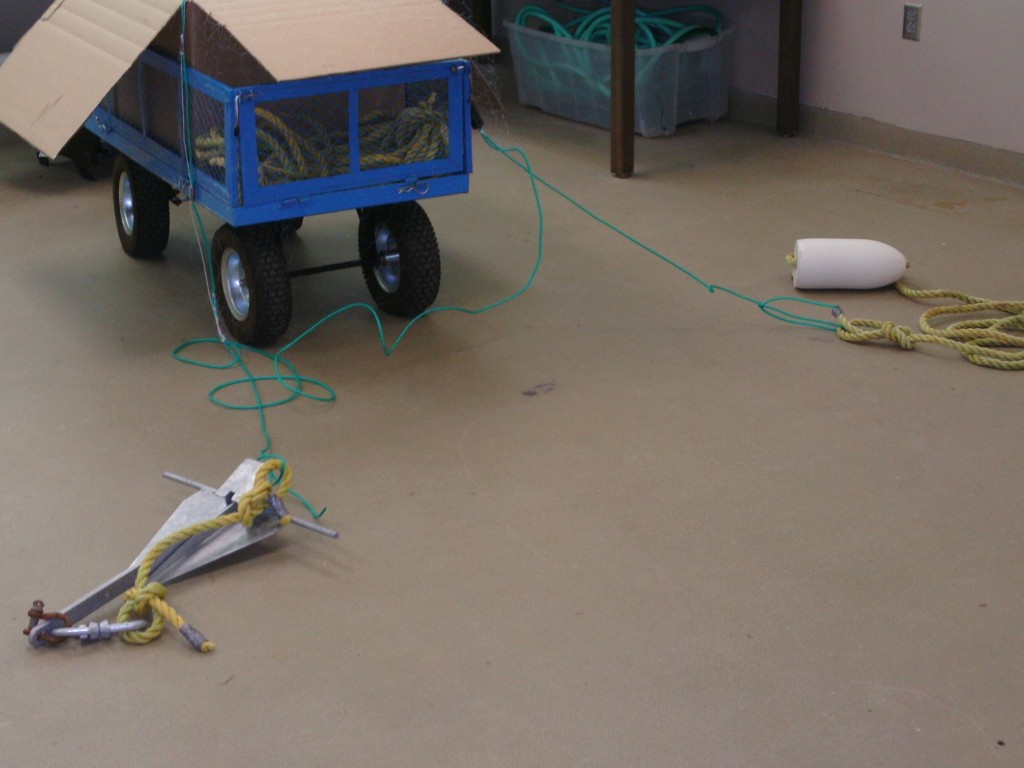 That whole box is taken up by the gillnet. 300 yards is a lot of gillnet, but still nothing compared to what your average commercial fisherman runs. 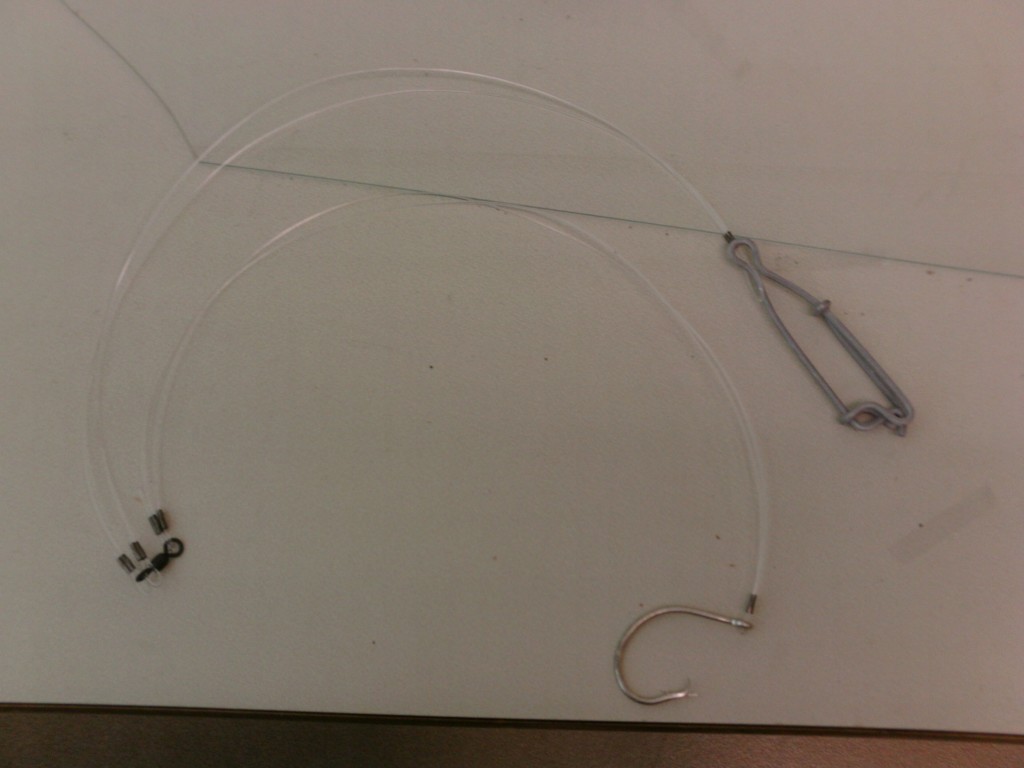 The longline leader set-up. Note the swivel in the middle, part of our efforts to make the gear easier on the sharks.

Neither gillnets nor longlines are particularly pleasant for sharks, and not all sharks are as tough as spiny dogfish.  We have no intention of lethally sampling any of our sharks, so a few measures have been taken to tilt the odds in favor of post-release survival.  First off, we’re limiting our gear soak time to 30 minutes, and will be tending it the entire time to respond as soon as we see something hit it.  Secondly, the longline leaders are equipped with swivels, which should allow the sharks to swim in a tight circle rather than have to hang from the line until we pull them up.  We’ll be making every effort to take our measurements (and pretty pictures) as quickly as possible before getting the smaller sharks back in the water, and larger sharks (anything over about 4.5 feet) won’t be taken out of the water at all.  Instead, the big sharks will be brought alongside the boat and measured that way.

Should be awesome.  Hopefully we can avoid North Carolina’s increasingly-frequent massive thunderstorms without avoiding the sharks.