In fisheries and marine science you have days that, by any objective standard, should be an amazing day in the field.  You get a ton of samples, the gear (mostly) works as planned, you find out some interesting stuff, and overall have a lot of fun.  The problem is, none of that has anything to do with your target species, and they continue to evade your every effort to find them.  This happened to me when we packed the longline, gillnet, and a few rods to search for sharks around Cedar Island.

Cedar Island represents the southern edge of Pamlico Sound, and is situated right between the mouth of the Neuse River and the entrance to Core Sound.  In the NCDMF surveys I’ve been basing my sample sites on, this is the area where longline and gillnet surveys alike run into sharks more often than any other area.  It’s not as far out as Hatteras, but it’s definitely a hike and feels much more remote than it actually is.  The “town” of Cedar Island is reached after about an hour of watching civilization recede as you get farther from Beaufort, and exists mainly as a place to catch the ferry to Ocracoke.  We arrived after a long drive and checked into Cedar Island’s one and only hotel, which makes it by definition both the best and worst hotel on Cedar Island. 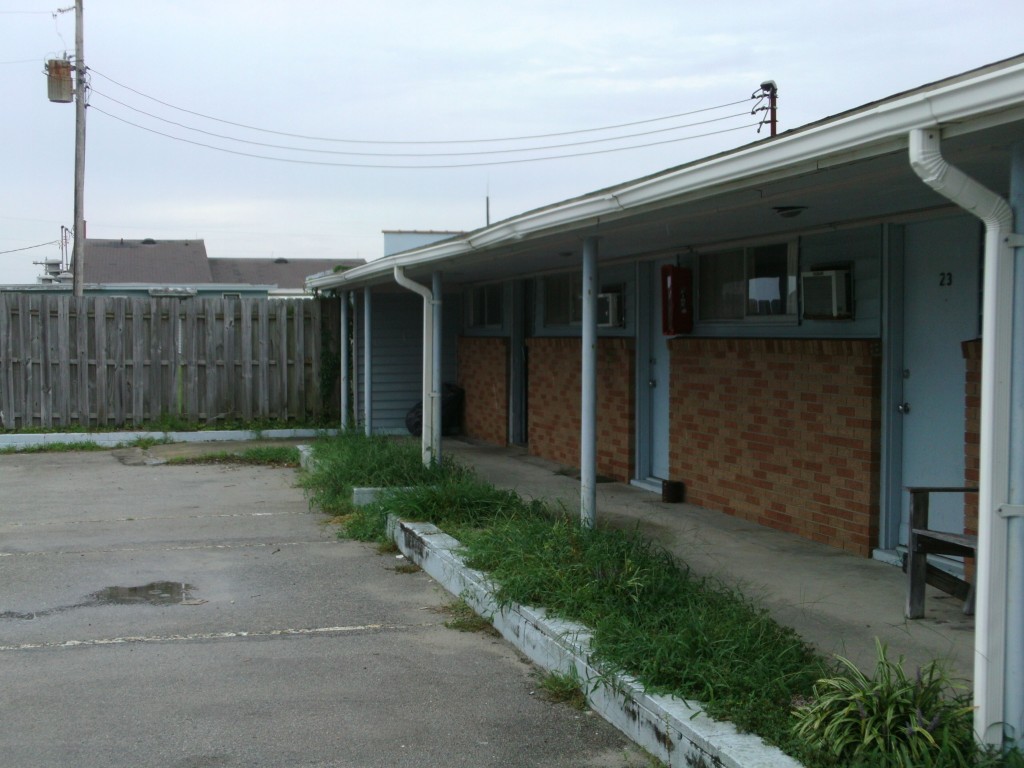 The Driftwood Motel. It’s rustic, I will give it that.

After getting situated, we hit the water.  Our crew for this trip consisted of me, Evan, Jeff, and Dan, who joined us from his new post in Morehead City.  I had no problem getting volunteers for this round because late August-early September is when enormous, mature red drum (Sciaenops ocellatus) migrate into Pamlico Sound to spawn in the Pamlico and Neuse rivers.  The importance of red drum as a gamefish is impossible to overstate; if a recreational fisherman anywhere between Virginia and the Gulf of Mexico isn’t obsessing over striped bass, they’re probably dreaming about red drum.  These are serious fish and have a lot in common with sharks in terms of feeding behavior and fishing, especially the small coastal and juvenile sharks we’re after.

We started the night at Brant Island Shoals, which was exciting because it’s the kind of far-out, middle-of-the-sound station that doesn’t get covered by the DMF surveys.  The gillnet went out with only some minor difficulties, though the nasty snag it picked up during the last trip wasn’t able to come all the way out (this still left it with about 280 yards of fishing length).  While the gillnet and longline soaked, we got a few casts in and the smallest drum of the trip appeared.  To give you a sense of scale on these fish, that drum was 37 inches long.  The longline was picked clean, but it quickly became apparent that we had set the gillnet right on top of a massive school of menhaden.  It was a long time picking the net, even with an extra pair of hands. 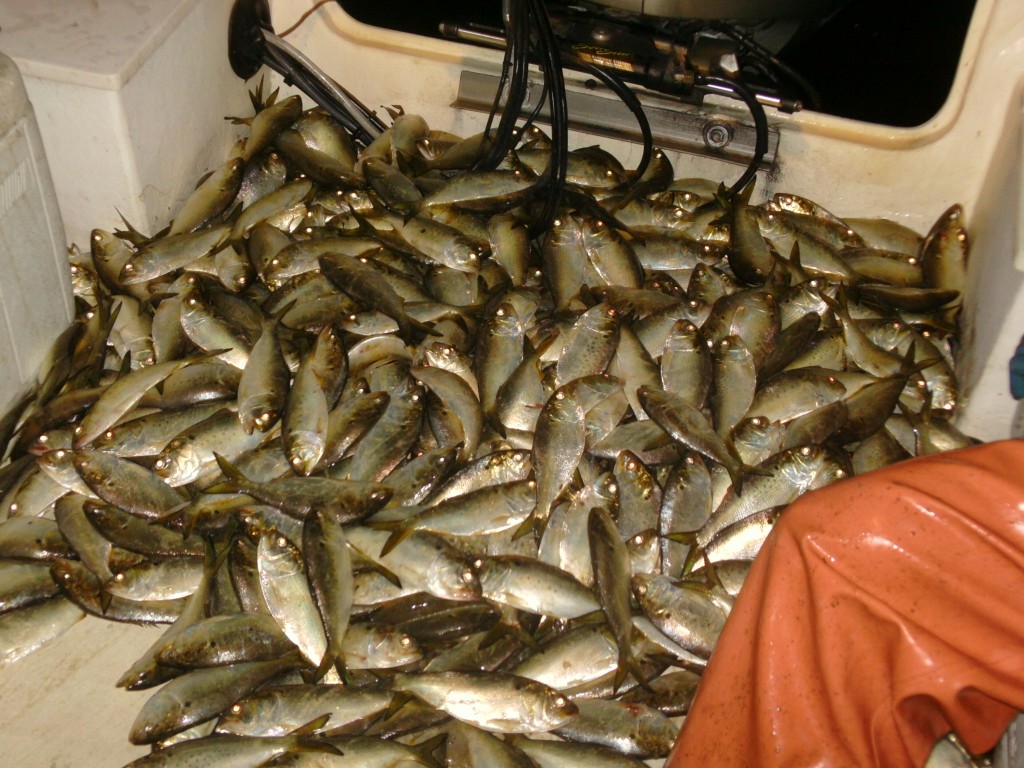 Despite releasing every fish that had so much as a glimmer of life in it, we still nearly filled the boat with menhaden. We won’t have to worry about bait for a while.

In addition to the metric ton of menhaden, the gillnet pulled up a few interesting catches.  Small bluefish and a few scattered weakfish appeared, as well as a few oddballs like harvestfish, small jack crevalles, and even an African pompano.  We may also have found a potential elasmobranch nursery, since several Atlantic stingrays and cownose rays well within their size range at birth were caught.  From an ichthyological standpoint, this was a great set.  From a “we need to sample more than one spot tonight” standpoint, it was a nightmare, taking nearly three hours to pick all the way through. 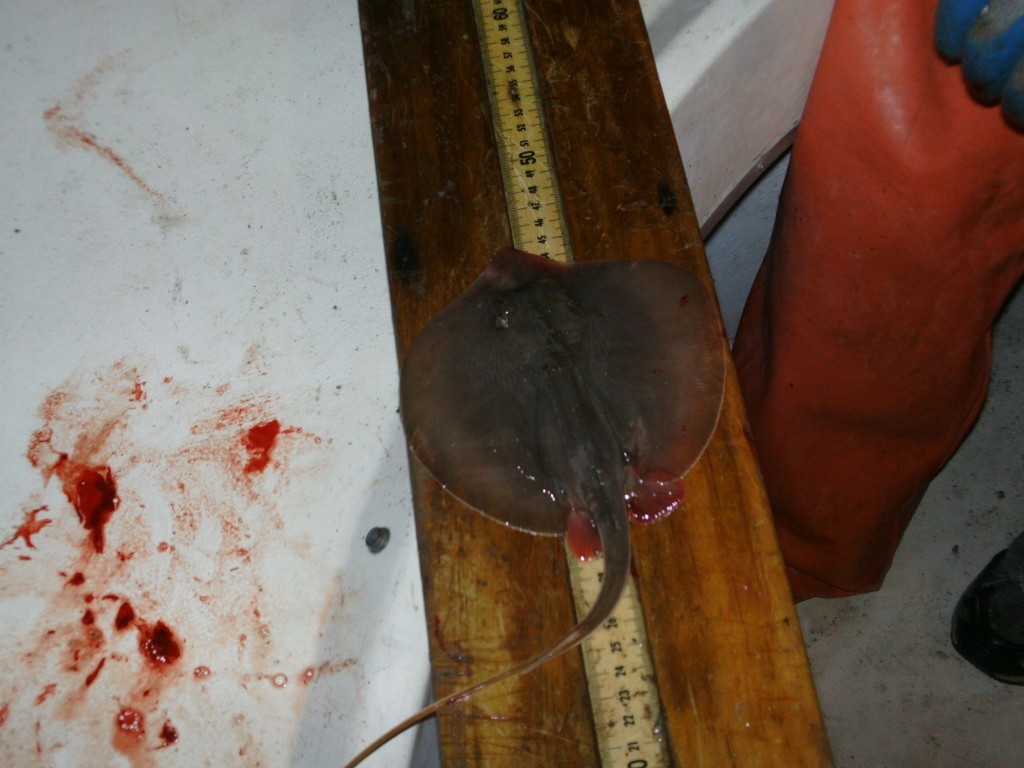 Several adorable baby Atlantic stingrays and cownose rays were in the area. The rays fared much better than the menhaden, with no noted mortality except for a pair of cownose rays we kept for another student’s research. 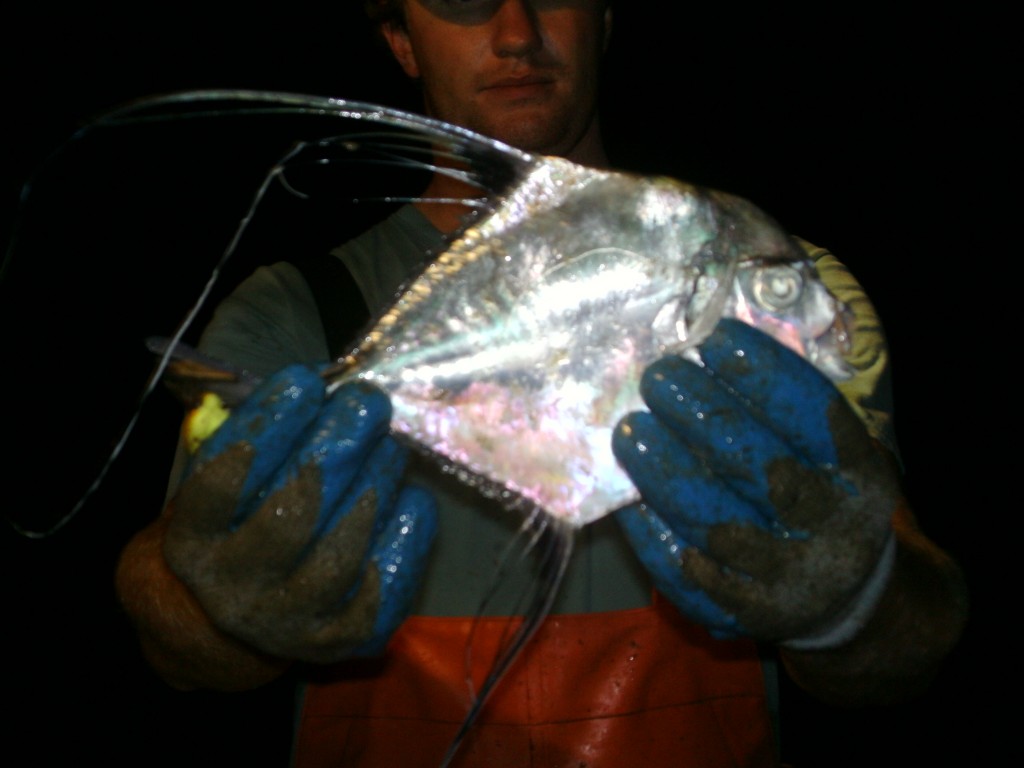 The gillnet-induced carnage attracted the attention of some big drum, and soon the line started running out on the rods.  Two more drum came up, both larger than the first.  Some even larger drum took bait on the longline at our second set closer to the launch.  These fish put up a fight even on the longline, almost making up for the fact that they weren’t sharks. 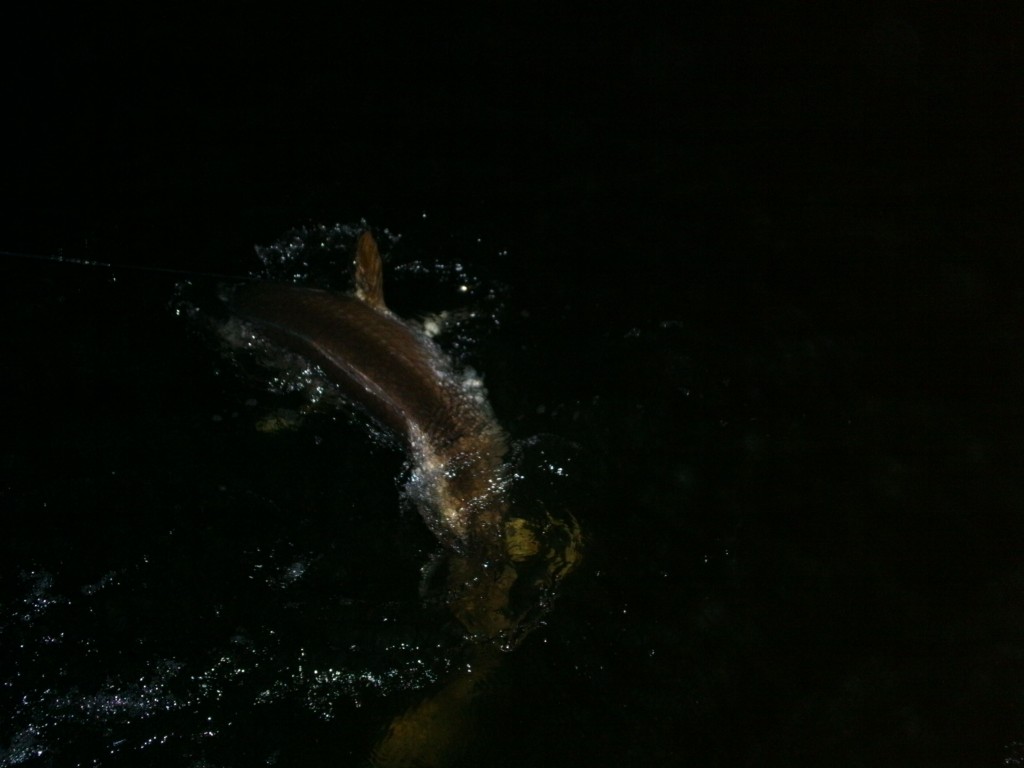 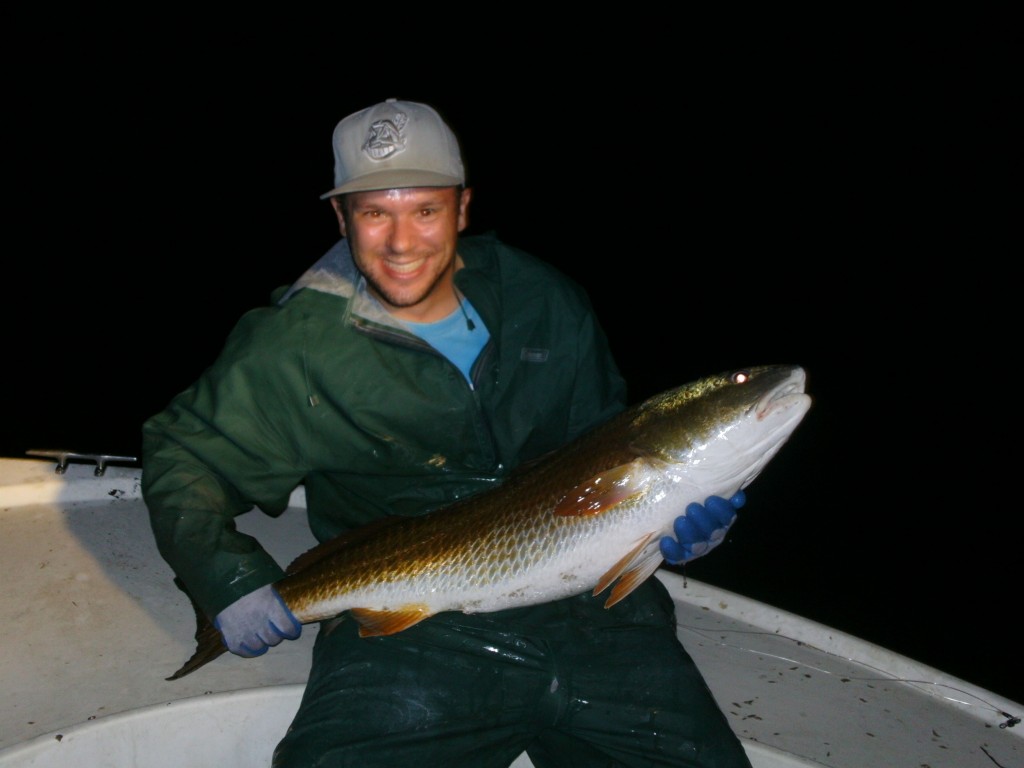 It’s impossible not to grin like a total maniac while holding a fish this size. Jeff with the smallest drum we caught all weekend. 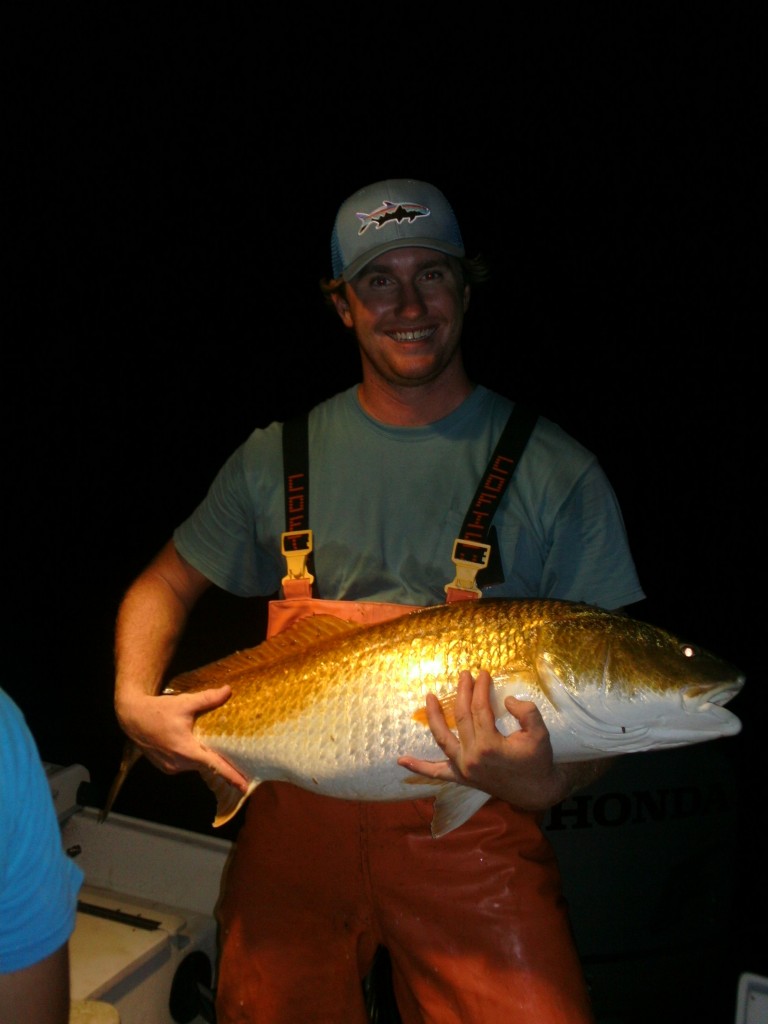 Evan freely admits that the possibility of this happening is the main reason he comes out sampling with me.

After a successful night of catching a lot of stuff that wasn’t a shark, we headed back to shore and spent the night in our… interesting hotel room.  Despite this, the wisdom of taking a room instead of our usual campsite became apparent when one of North Carolina’s daily apocalyptic thunderstorms ripped by very early in the morning.  We had a nice tailgate breakfast, drove through some unique Downeast communities in search of gas, and were back on the water by 5:oo p.m.  While we had headed towards the Neuse the previous night, we opted to check stations near Ocracoke Inlet and Core Sound for the second night (officially connecting the dots between our Neuse River and Cape Hatteras sampling trips).

Since the gillnet was still having some technical issues, we opted for a longline-only night in hopes of getting a lot of sets in.  We ran two sets at Royal Shoals, about three miles within the sound from Ocracoke Inlet, which proved to be somewhat disappointing after all the action the previous night.  The first set brought back nothing, and the second brought up a smooth butterfly ray, bringing the number of elasmobranch species encountered this trip to three. 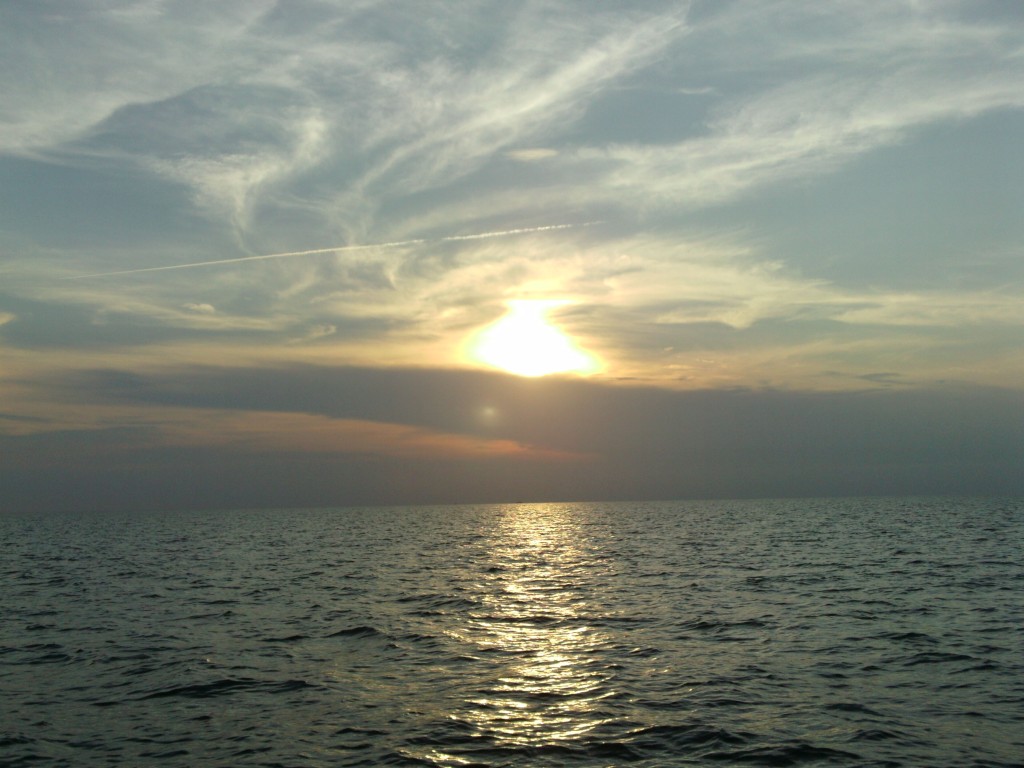 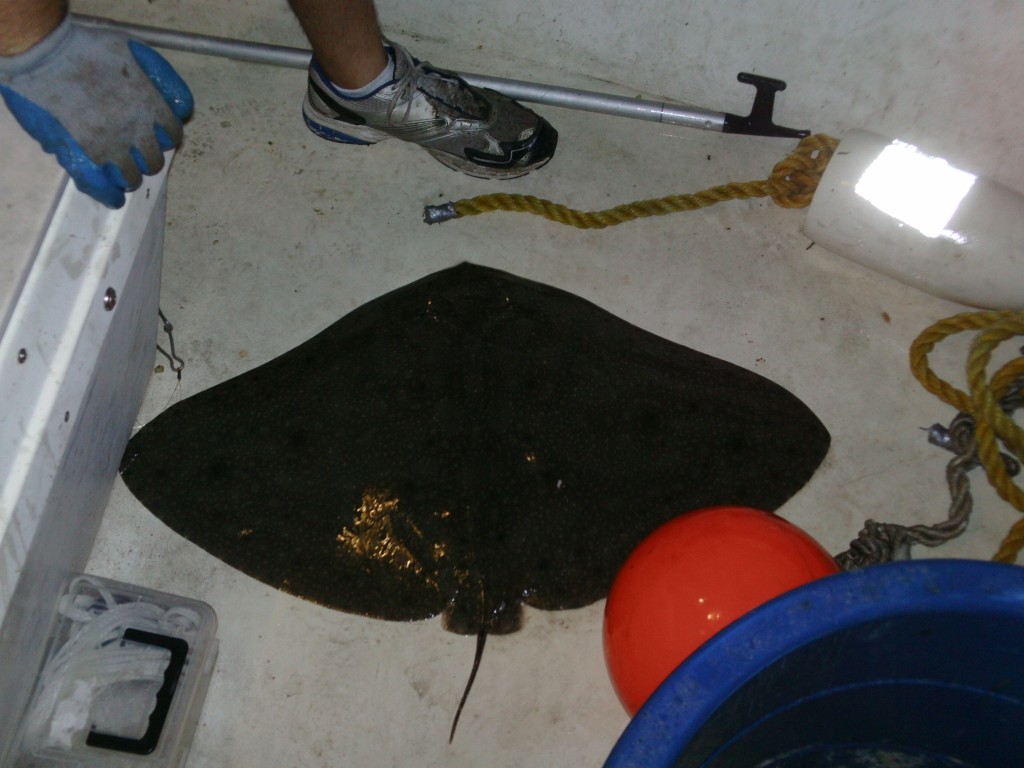 Smooth butterfly ray, the only noteworthy catch from Royal Shoals. The lack of a barb was appreciated during handling and release.

Our next station took us closer to the entrance to Core Sound, which is the unofficial border between temperate and subtropical waters in the North Carolina sounds.  This was a highly productive area… for red drum.  One of our stations had an absolutely ridiculous number of these enormous fish, and at one point every fifth hook brought up a 40+ inch drum.  The rods also caught a fair number in this area, including the first red drum I’ve ever personally caught on rod and reel (an impressive 45 inch bruiser).  The largest drum of the weekend, at 47 inches in length and nearly as big around as Jeff, was also caught here. 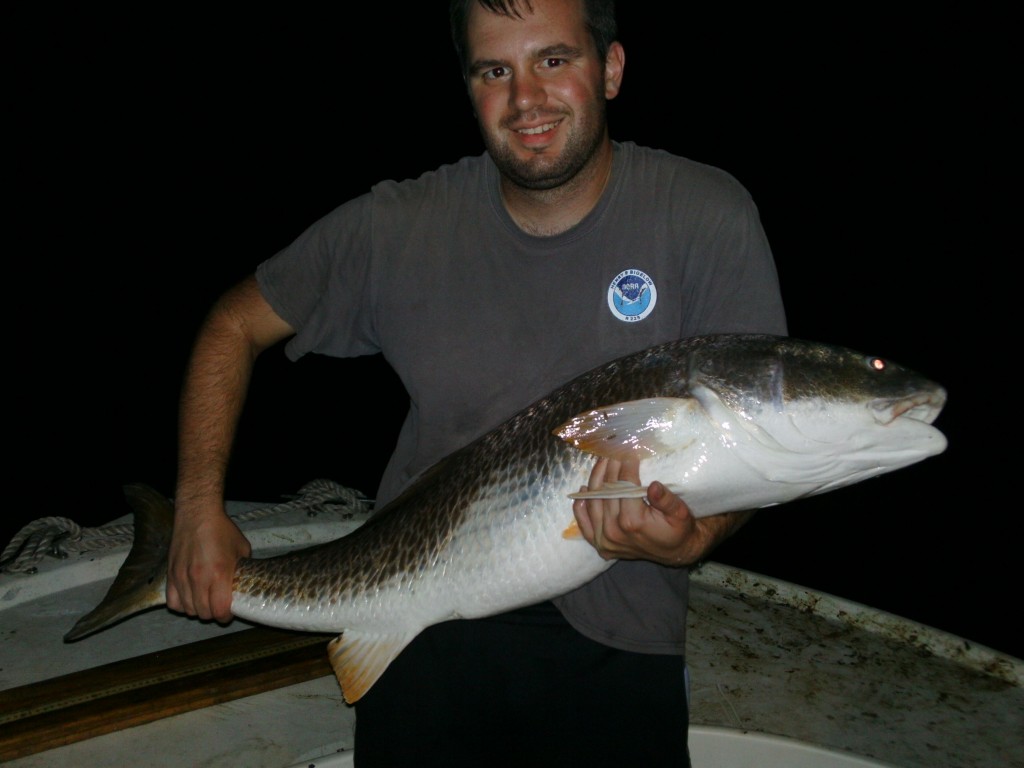 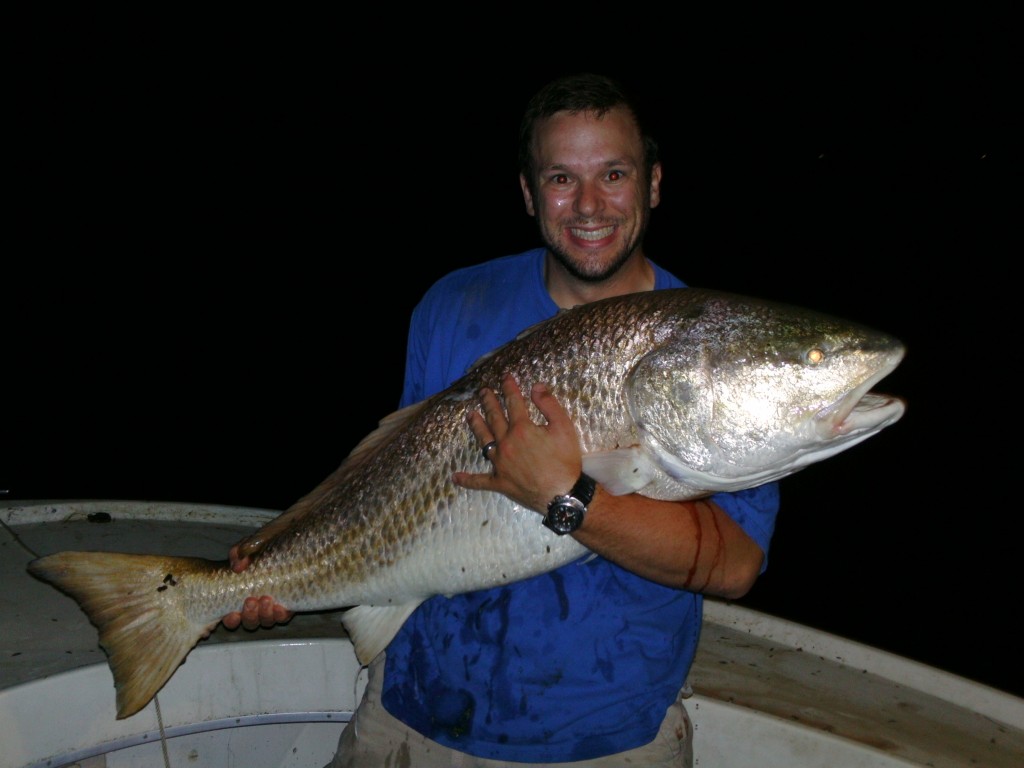 Jeff is not holding this fish closer to the camera or using any of the other tricks to make it seem larger. He physically can’t. This drum is actually that big.

Our last set was practically in the mouth of Core Sound, and this was where our absurd drum catch suddenly took a frustrating turn.  While the longline was soaking, it became very obvious that at least two sharks were in the area.  One rod hooked up to something that bit through the leader with contemptuous ease, and another pulled up a bait that had been bitten in half and bore several telltale semi-circular slashes.  At this point I was convinced we had finally hit the jackpot and set in an entire school of sharks.  We started hauling back the longline and a smallish southern stingray showed up on an early hook, bringing the elasmobranch species count to four.  A very large cownose ray also made an appearance, and the rest of the set was made up… of more freaking red drum.  This would have been tolerable if it weren’t for the fact that a thunderstorm suddenly appeared to our south and looked for all the world like it was about to pounce on us like the unseen sharks had on the rod and reel bait.  Red drum are not an easy fish to unhook and properly release when you’re trying to run for your life, but we managed to finish unhooking the catch (albiet skipping taking measurements) and race back to the launch… just in time for the storm to disappear completely.  You win again, North Carolina weather.

For those keeping score at home, over the course of two nights’ sampling we caught 15 drum on the longline and a further 10 on the rods.  That’s 25 red drum in two nights.  Fishermen and red drum researchers alike go out hunting drum for years without having a trip that good.  My shark survey is officially the best red drum survey ever.

Rather than drop more grant money on staying an extra night in the hotel, we decided to drive in shifts on the way home.  This proved to be a nearly tragic idea.  The results are part of an insurance inquiry that is still going on so I can’t go into any further detail than to say that no one got hurt.  Not a cool way to end what had been a very fun, if still maddeningly shark-free, weekend of sampling.  It could have been much worse though, and the important thing is that we’re all still walking and talking and able to get back to not catching sharks.

Next stop will more than likely be the northern Outer Banks, but if there’s enough money left after that trip I would gladly hit these southern sites again.  It seems like we’re getting closer to catching one of these sharks each time, and this time they actually seemed to be actively mocking us.  In the meantime, I suppose red drum are a decent bycatch.