Ah, the majestic striped bass. It’s been called the “perfect fish” by enthusiastic anglers, and represents one of the greatest successes of fisheries management in North America. It fights like a demon when hooked and is delicious when baked. Anglers are so enthusiastic about them that they will turn on commercial fishermen at the slightest evidence that a handful of stripers are getting caught in their gear, and this fish has considerable political clout thanks to the massive amounts of money brought in by the recreational fishing industry.  Other popular sportfish like bluefish and false albacore are mere peons compared to them.  In North Carolina, only red drum are mentioned with the same reverence and sought with the same obsession.  All hail Morone saxatilis, the mighty striped bass!

It’s not that I don’t like striped bass.  Stripers are a fun fish to catch and taste great, and are one of the better excuses to call out sick and get on the water.  I just get tired of hearing about them on a near-constant basis.  North Carolina is a state with many interesting and worthwhile fish to catch, but sometimes it seems like the entire state’s recreational fishing culture lives and dies solely on these black and white brutes, and this is reflected in the amount of research and management effort that goes into them.

So I’m here to tell you that striped bass are not all that.  In fact, they eat way too much.

Spiny dogfish, blamed for single-handedly keeping every valuable fish stock in the Atlantic down, are density-dependent feeders, which means that their diet typically reflects whatever is abundant in the local environment.  As foraging strategies go, this could be considered one of the more “responsible”, as it prevents dogfish from over-consuming any one species and also allows them to switch prey when necessary.

According to results from a compilation of diet studies on striped bass (Walter et al. 2003), striped bass contrast with dogfish in that they are actually fairly selective.  In the Chesapeake Bay and North Carolina, stripers feed almost exclusively on schooling forage fishes, in particular menhaden (also a favorite of the spiny dogfish) and alosines (river herrings).  Unlike dogfish, stripers are anadromous, which means they can pursue their prey into fresh water as they make their annual spawning runs.  This is reflected in the seasonal nature of river herring in the diet of striped bass, while menhaden are a fairly constant presence and are likely the most important food source while the bass are out in the ocean. 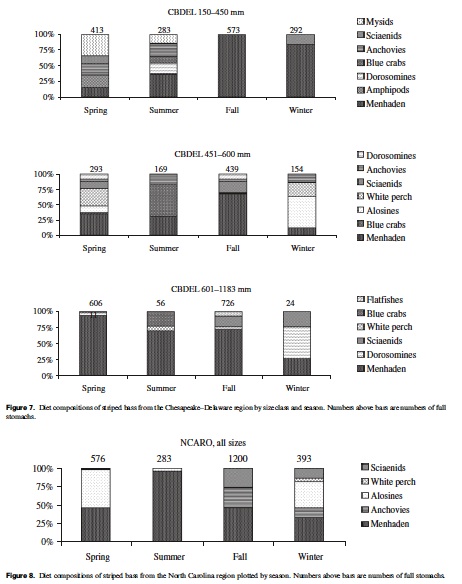 Percent diet composition of striped bass by size class in Chesapeake and Delaware Bays (CBDEL) and all sizes in North Carolina (NCARO). From Walter et al. (2003).

Menhaden in particular shoulder a lot of the responsibility for feeding striped bass, and river herrings have to put their time in during the winter and spring.  This has the potential to create some issues, particularly given that river herring have been in trouble for some time, and are a conservation and management concern in their own right.  Essentially we have a high-level predator that has dramatically increased in abundance largely thanks to its popularity as a sportfish, and it’s feeding primarily on forage species that a.) are also important in the diets of plenty of other predators, and b.) are crashing.

And in case you thought this was a problem in the making, here are two case studies that confirm that the problem has already been made:

Uphoff (2003) reports that in the upper Chesapeake Bay during the years 1997-2000, the striped bass population became severely ill, resulting in lowered stock fitness and fecundity.  The reason?  Not enough menhaden to eat.  Stripers in the upper Chesapeake had actually hit their carrying capacity and there was simply not enough food to go around.  This paper shows a direct correlation between efforts to produce the biggest stock of massive, trophy-sized striped bass possible and a crash of the comparatively-neglected menhaden.

Hartman (2003) paints an even bleaker picture in the Hudson River, where predation by stripers on river herring may be outpacing the ability of alewife and blueback herring to replace their numbers.  Turns out that while the resurgence of striped bass was great news for recreational anglers, it could not have come at a worse time for river herring.

It seems that the heavy favoritism towards striped bass may be at the expense of their prey species and, in the long term, the whole ecosystem that supports them.  What to actually do about this situation presents a thorny problem: it’s almost impossible to overestimate the popularity of striped bass, and recreational anglers and states that benefit from recreational fishing have a considerable vested interest in maintaining large stocks of massive, hungry stripers.  Do we double our efforts to conserve forage species (even though the sheer appetite of their predators might make this a futile gesture)?  Do we take steps to increase the population of striped bass predators (perhaps a job for the spiny dogfish)?  Do we increase fishing pressure on striped bass (which would probably be deeply unpopular among anglers, not to mention that fishing to purposely reduce population is a slippery slope)?  I’d love to see peoples’ thoughts on this.