Today I finished the day by going over my 204th set of stomach contents.  Given a total sample size of 399 (I know, I know, I couldn’t just get an even 400), that puts me at officially a little over halfway done!  In celebration, below the jump are some nice gory pictures of preserved dogfish prey. 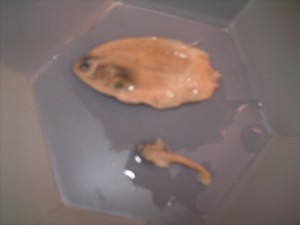 About 8/10 of a Gulf Stream flounder and a small goby, both showing the normal wear and tear of digestion. 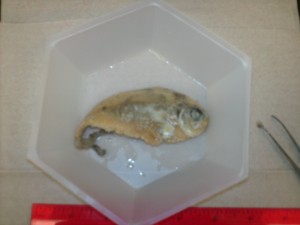 A butterfish, mostly skinned by the mighty digestive juices of the spiny dogfish. 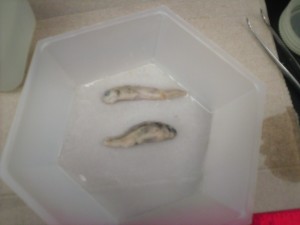 Not 100% sure about these little guys. The one on top is clearly a cusk eel, though species is tough due to the ruined coloration. I'm thinking beardfish for the one on the bottom, though that may change as I hit the books. 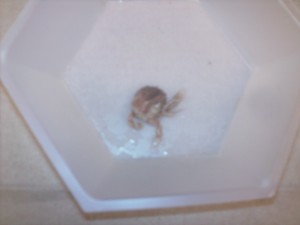 This unfortunate decapod is likely in the swimming crab family due to its paddle-shaped hind legs, though it may be too squished to get any farther than that.

A surprising number of the prey items so far have been identifiable at least down to a family level, though the easiest by far remain the fish species, since those are what I’m most familiar with.  I have a lot of the inverts preserved for late ID simply because I’m just not as good at IDing things like polychaetes and sea cucumbers (I do okay with the arthropods though).

Earlier I posted on the cutting power of spiny dogfish jaws and their usefulness in carving up large prey.  For evidence of this, look no further than the sliced up menhaden remains that seem to form an important part of the diet of these little predators.  These particular chunks came out of sharks that were only slightly more than 800 cm long, and are photographed with an 8 inch (21 cm) ruler for scale. 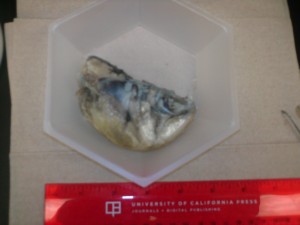 This menhaden has seen better days. 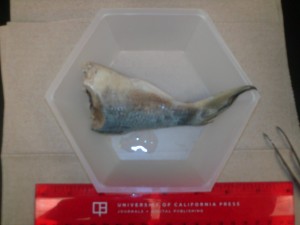 Menhaden tail featuring a textbook shark bite. Note how clean the cut is and the angle, which suggest this fish was chomped head-first.

I hope you’ve enjoyed the preserved blood and guts of these gut contents posts so far.  Keep checking back to see what else I find in my dogfish puke (weirdest object so far: a single bird feather, which I unfortunately forgot to photograph).