Now that I’m back in NC and (relatively) settled, here’s the scoreboard and final thoughts on my time aboard the Bigelow.

Overall I’m pretty satisfied with those numbers.  For my first time sampling off a fisheries cruise I think I did alright, especially since the big deck tows of dogfish provided me very little time between tows.  Between this set of sampling and the 250 samples headed my way from the Cooperative Winter Tagging Cruise (thanks, Dr. R) I should have enough dogfish puke to last me through the summer.  Now the real fun begins…

Here are some things I learned on this trip:

Spiny dogfish are hard core.  Make no mistake, trawl surveys are not kind to fish.  Crammed into the cod end of a trawl net, impaled on one another’s spines, and in some cases nearly dismembered by the gear itself, these little sharks aren’t in for a tickling contest.  And that’s before they’re sent through the checker, tossed into baskets, and measured (and some jerk rams a tube down their throats).  Most of the bony fish in this situation are mercifully dead by the time they get into the checker, but the elasmobranchs almost seem relatively unfazed.  The dogfish in particular are amazing in their survivability, happily turning upright and swimming off the second they hit the water.  If nothing else, this cruise has given me a new respect for just how hard it is to kill a dogfish (which is good, since part of my project is nonlethal sampling).

The scientific literature is right (for the most part).  It turns out that most scientists who have studied the distribution patterns of spiny dogfish were pretty much on.  We saw almost no dogfish until crossing into North Carolina, where the inshore stations saw large females almost exclusively.  Once the ship had looped around to the offshore stations we started hitting large numbers of males and juveniles.  Of note: south of Hatteras only one tow actually caught any spiny dogfish (smooth dogfish largely replaced them in that area) but managed to get a pretty large aggregation.  Also, once out of North Carolina we started seeing mixed tows of large females, mature males, and pups.  Something very interesting must be going on there.

My facial hair is disappointing.  After getting back out to sea after the repairs I decided I wasn’t going to shave until after the cruise and in the process grow a nice gnarly field work beard.  I had high hopes, since normally going a mere two days without shaving results in an almost razor-breaking forest of stubble.  However, this was as good as it got: 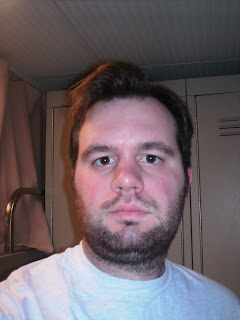 Who you callin’ scruffy?
After about five days the “beard” stopped and stayed in the same hedgehog-esque, noticeably itchy state until the end of the cruise.  I think my facial hair requires a bit more training before I turn it loose.
So that’s my take on the Epic of the Bigelow.  Stay tuned for the analysis and of course more witty observations on spiny dogfish, grad school, and life.