The ship is currently hanging out at the mouth of the Chesapeake Bay to avoid some weather, so sampling has been suspended for the day.  For a while the seas were among the roughest I’ve seen, and then when snow started flying I just had to get some pictures.  Even the seasoned members of the crew were making Deadliest Catch references.

At this point of the cruise I’m starting to feel like Martin Sheen going up the river in Apocalypse Now.  At some point tomorrow we hit North Carolina waters and I get very busy.  I’m hoping that we get a good chunk of the NC stations done during my watch, but that depends on how many Chesapeake stations we have to get through first.  Either way I’m probably going to be up for the entire day tomorrow frantically collecting dogfish puke.  Much coffee will be consumed.  I’ll probably be hallucinating by the end.

On the plus side, I’ve taken the liberty of testing the efficiency of the tube lavage method.  Basically this means that I’m performing lavage on the dogfish already doomed to be sacrificed for the Bigelow’s own diet data, and comparing the weight of what I get them to spit up to what’s left in the stomach.  After a few minor tweaks I’m getting near-100% efficiency, which is awesome!  We’ll see how that holds up when I’m trying to sample 20-30 dogfish per tow in the next couple days.

Nasty weather pictures below the jump. 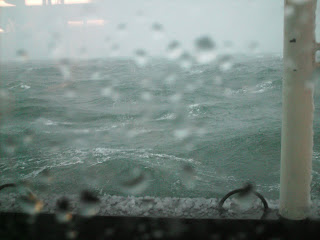 Doesn’t quite do the weather justice, but you can see the snow buildup. 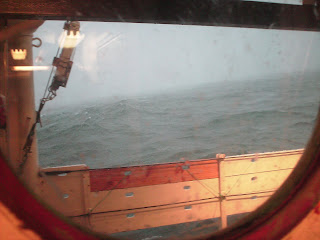 These pictures were taken through the portholes in the wet lab, since I didn’t want to risk getting tipped overboard.  My policy is to only put myself in mortal danger for shark pictures.