While the catches heading south in the near-shore stations were dominated by massive, mature females, the trawls heading back north through the offshore stations have hit the mother load.  I’ve been frantically trying to get data on all the smaller and male sharks while I’m still in North Carolina waters so I can even out the demographics on my study.  Unfortunately there are fewer sampling stations heading north so I’m trying to do more with less while hopefully preventing any one tow from biasing the data.

Which is tough to do when some of the tows look like this: 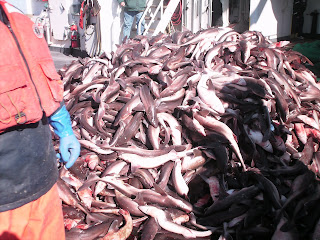 10,000 pounds of dogfish.  Seriously.
Tows like this are at least partially responsible for the bad reputation of dogfish among just about anyone who ever has to tow a net or fish with any gear whatsoever.  However, scientifically, they’re very interesting.  This particular aggregation had some of the largest females I’ve seen yet, and almost as many mature males.  What’s more, most of the females were very pregnant, and the pups were pretty much ready to come out (and in some cases did, right on the deck).  I’m not sure if anyone’s done any work on this kind of tow, but it could be significant.
That said, my study is on feeding habits, and big dogfish tows actually provide less-than-optimal data for my research.  Aside from having to heavily subsample in order to avoid biasing the overall study, this dense a catch presents a number of problems when sampling for stomach contents.  Obviously cramming two thousand dogfish into one net heavily stresses the sharks, and one of the most common reactions to stress among fish is to expel the stomach contents.  And dammit, I want to expel those stomach contents!

Also, these tows present a frustrating catch-22 for sampling design.  Doing my sampling during a working research cruise means I need to fit it in between tows when I can.  Not only that but I often need an extra pair of hands to take down data and/or hold bags to get this done with any appreciable efficiency, which necessitates someone else having some free time.  Working up a tow this size eats up most of the time until the next one, and only in drastic situations will the ship break procedure and hold off on the next haul.  So while the catch shown in the picture contained several demographics and literally thousands of sharks, I only had time to lavage fifteen of them before the net came in for the next station.

The North Carolina sampling is pretty much done at this point, so now I get to relax in my off-watch and take stock of what I’ve recorded.  There is still some deep water sampling off of Virginia and Delaware, so stay tuned and see if we catch anything interesting.  It’s been quite the ride and it’s not over yet.