Most of day 12 was spent south of Cape Hatteras trawling some very interesting subtropical species.  With the exception of one tow, spiny dogfish were virtually absent from the area (though when they did decide to show up they showed up in numbers).  Which isn’t to say there weren’t plenty of other sharks to keep me occupied (see below the jump).

I was hoping to get some lavages south of Cape Hatteras and wasn’t disappointed when the opportunity presented itself.  Though spiny dogs are known as a temperate/cold water species, when in warm waters they’ll gladly eat warm water species.  Some of the most interesting and colorful stomach contents were found in that one tow.

Now that we’re north of Hatteras we’re running into massive schools of dogfish, which are still dominated by mature females but are finally starting to include significant numbers of males.  This provides the opportunity to compare diet by sex within the same school.  Tomorrow will be another long sampling day (and then after that I believe we leave North Carolina waters).

And now that you’ve suffered through the boring back story, here are the shark pictures: 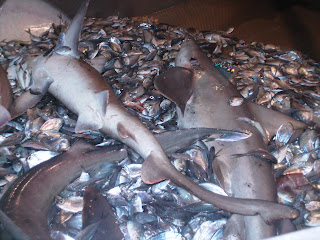 It’s going to be a good watch when the first tow is loaded with sandbar sharks.  We actually ran out of shark tags from this one night of sampling. 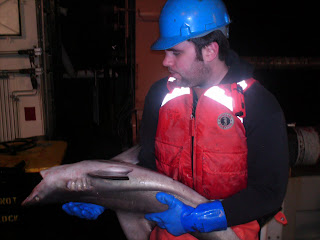 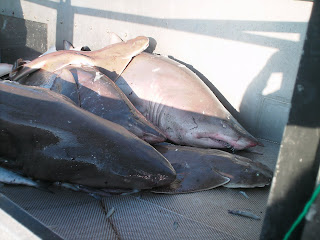 The sun came up, and so did the sand tigers.  That’s THREE in one tow.  All larger than the one from yesterday. 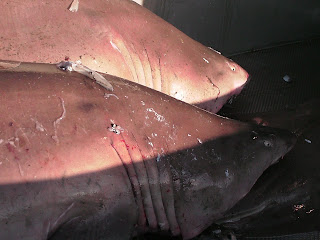 Two sand tigers waiting patiently to be measured and released. 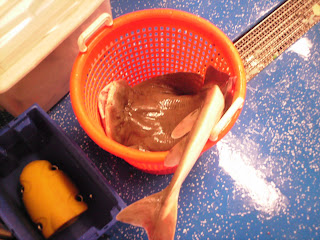 Forget everything you’ve ever heard about any other shark.  Angel sharks are the single most hazardous shark to handle.  Ever.