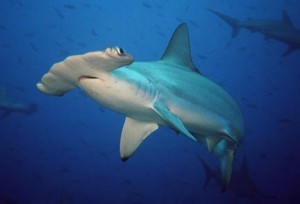 The better to see you with. Photo by Tom Burns (elasmodiver.com).

It’s been a rather busy weekend/week here due to catching up on grading and attempting to get my thesis done and defended sometime before the next school year, but fear not, I haven’t forgotten you.  Because other people manage to find time to blog when I don’t, we have a good selection of neat stuff to look at.

First a shameless plug.  You may notice by the little blue bird up in the “Follow” section that I’ve finally given in and started a Twitter account.  I’ll be posting links to things I think are cool as well as shamelessly promoting this blog, so make sure to follow me there.  Plus you can spy on all those incriminating Twitter conversations I have with other salty bloggers.

Since my post on sharks being trained to combat invasive species seems to have gotten quite a bit of attention, check out this post about the drastic measures being considered to combat the potential Asian carp onslaught in Lake Michigan.  Unfortunately the Great Lakes are lacking in sharks to eat their nuisance species.

The new season of “Shark Men” (previously “Expedition Great White”) has started on the National Geographic Channel, and jumped right into dealing with the fallout of Junior, the shark they foul-hooked while filming.  Check out the epic comments section on this post at Southern Fried Science, which has just about everyone involved and every possible user group represented.  For more on the story, see the plot thickening.

Also on Southern Fried Science, it’s Science and Sustainability Month.  Every post over there will have something to do with using science to more sustainably use the world’s resources.  Some of my favorites so far have involved sustainable wine, sustainable pets, and using sharks as biofuel.

Also on The Network, check out this post by The Birds, The Bees, and Feeding the World about how the positive effects of closing areas off to trawling depend on which species you’re looking at.

Here’s another blue blog worth checking out, recommended by Jen: Sea Monster, a blog about diving, marine biology, and all the things that make the ocean awesome.

We all know that forage fish are important because they feed all those big charismatic species we know and love, and Atlantic menhaden are pretty much the prime rib of forage fish.  Fortunately, someone has taken it upon themselves to Save the Bunker.

Finally, those on the West Coast and in the Pacific may want to keep an eye on this predicted path for the marine debris washed out of Japan by the tsunami.

That’s all for this link dump.  If you’re on the water in NC this spring, let me know if you spot any late-season dogfish or other sharks of note.  We had some good luck documenting a late-spring school of dogfish last year, and I’d love to see if that’s a regular occurrence.