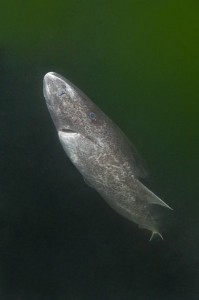 One of the biggest dags out there. Photo by Andy Murch (elasmodiver.com).

As cold weather sets in and everyone gets ready for the holidays, I figured a cold water shark would be appropriate for today’s link pun.  Due to Thanksgiving’s rapid approach and a visit from The Hot Girlfriend, I’ll be eschewing my normal epic posts and subjecting you to another round of sharkish links.

It seems like every time I end up doing one of these link posts we add another blog to the SFS Network.  So extend a warm welcome to Zoologirl, and check out her posts on ecology and citizen science.

Speaking of new blogs and links, those of who have missed the sharks and snark of The Chum Slick should check out Shark Links for shark news and occasionally NSFW commentary.

Before the days of dolphin-safe tuna, tuna were found by following pods of dolphins, which for any number of reasons were usually associated tuna schools in the open ocean.  Now that such practices are no longer allowed, tuna fishermen in the South Pacific have turned to using whale sharks as tuna lures, which you can imagine works out even worse for the sharks than for the dolphins.  Tip o’ the hat to David, who some time ago wrote up how dolphin safe tuna has gotten sharks and other marine life into this situation.

Turning to more interesting and less depressing news, genetic evidence suggests that great white sharks in the Mediterranean Sea are more closely related to sharks from Australia than from the Atlantic.

Remember that little oil spill from over the summer?  A working paper has been released on it by the government, and it says all kinds of good things about the Minerals Management Service.

To close out this link post and get into the Thanksgiving spirit, here’s a video of some feasting dogfish.  Happy Turkey Day, all.