Yes, it’s been a while and yes, I do have more Summer of the Shark updates (and yes, this “summer project” has gotten pretty far into autumn).  To get back into the swing of things, here’s a quick post on an interesting sighting I made while fishing at Bogue Inlet Pier last weekend.  While reading this, keep in mind that this spot is infuriatingly not within my study area.

Update 10/19 – looks like I’m not the only one seeing dusky sharks at Emerald Isle.  Details below the fold.

The Bogue Inlet Pier, in Emerald Isle, NC, is one of my favorite places to fish.  I’ve gotten decent catches of spot and bluefish there, but most often I get my bait stolen by crabs and pinfish the entire time.  The reason I keep going back is that even when the fishing is slow, the locals still put on a show.  And by “locals” I mean the ones with triangular dorsal fins.

At Bogue Inlet, the fish cleaning station, where fishermen gut, fillet, and scale their catch before tossing the remains, sits near the end of the pier.  The water immediately under the cleaning station regularly swarms with 4-6 foot blacktip sharks, which generally just cruise around but occasionally start mixing it up with the fishing lines and making spectacular leaps out of the water.  You would think any given fishing pier would attract sharks, but the consistency with which I see sharks at thsi particular pier is unusual.  To give you an idea of the usual situation, here’s a video I took last summer during a lull in the fishing.

Last weekend, the water and light were clear enough that I was able to get a few better-than-average shots of the circling sharks.  I’m fairly proud of this shot, which shows all the characteristics you’d need to ID a blacktip from above: black tips on the pectoral fins, a relatively pointed snout, stout body, and a dorsal fin originating forward of the base of the pectoral fins.  Also, I think the colors came out rather nicely. 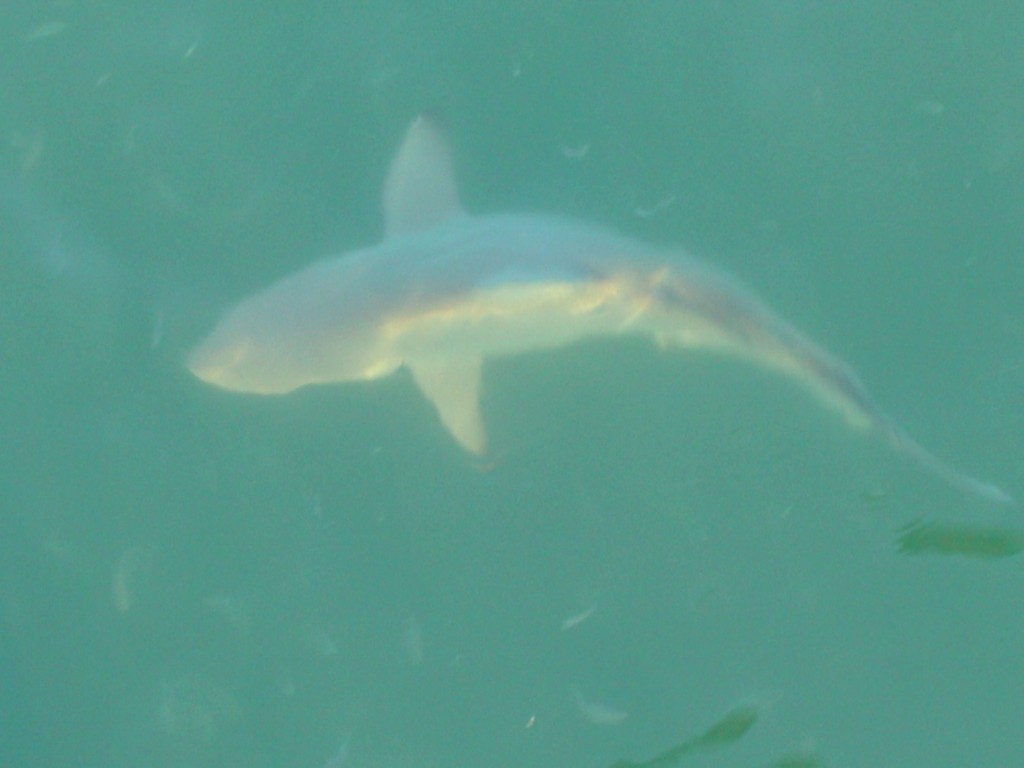 This blacktip shark is wondering if you’re done with that fish carcass.

As the sun began to set, another shark showed up that was distinct from the others, and not just because it was nearly double the size of some of the smaller blacktips.  This shark had a slimmer, more tapering body, a much more rounded nose, a dorsal fin originating right at the end of the pectoral fin base, and an obvious ridge on its back between its first and second dorsal fins.  Did I mention it was big?  This beast was easily in the 8-10 foot range and caused the formerly fearless blacktips to scatter whenever it rose out of the darkness. 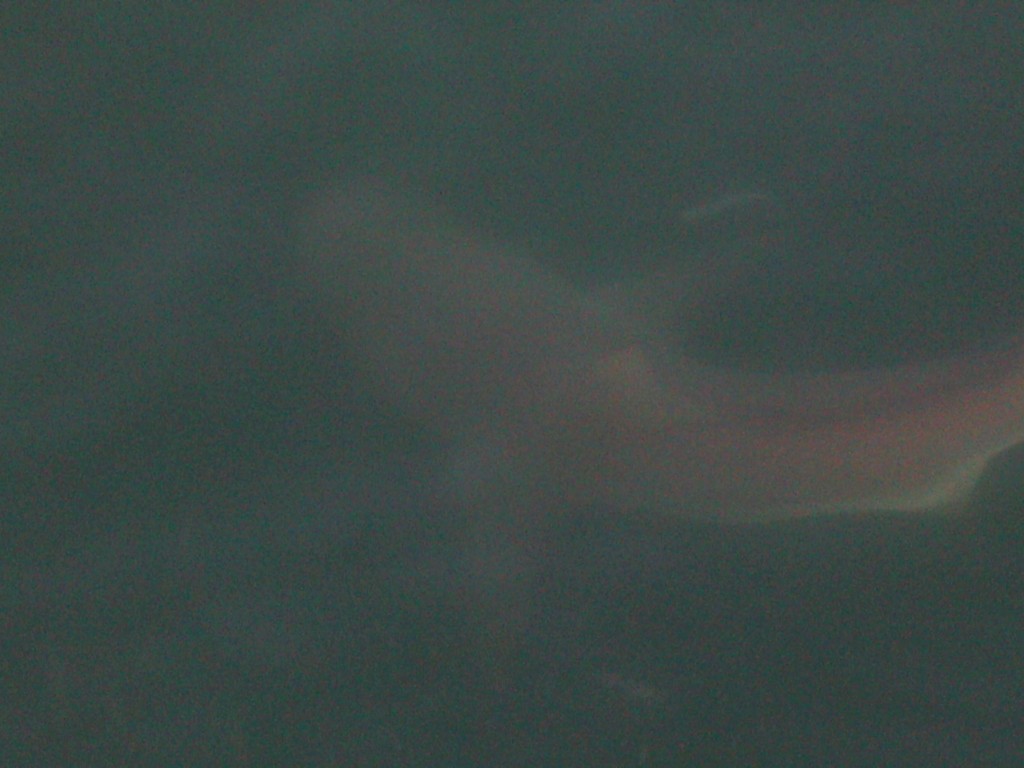 Unfortunately due to the fading light this spooky shot is the best picture I have of the large shark.

The interdorsal ridge narrows the potential ID down to two species that regularly occur in coastal North Carolina: the sandbar and the dusky.  The dorsal fin seems too small and far back to be a sandbar shark, and this shark would have been on the upper edge of the sandbar size range.  To me, this big shark looks like a dusky (though I’ve been wrong with my ID before and welcome any feedback from my fellow elasmophiles).  If this is indeed a large dusky shark hanging around the Bogue Inlet Pier, it’s potentially kind of a big deal.

The dusky shark is the largest species in the genus Carcharhinus and one of the most threatened sharks in U.S. waters, designated a species of concern and a no-take species by NMFS.  Even by shark standards, duskies are slow-growing, estimated to take nearly 30 years to reach reproductive maturity.  They’re generally thought to be more of an open-ocean shark, but it’s not unheard of for them to wander into the surf zone.

If this shark is in fact a dusky, it is clearly a large, likely mature individual coming very close to shore and making use of human activity to supplement its diet.  This is the first time I’ve seen one, so I don’t know if this particular shark is a regular at the pier.  Guess I’ll have to keep going back…

Update – Frequent “Summer of the Shark” collaborator Evan tipped me off to this post on the NC Angler message boards, where on October 15th a surf fisherman reeled in a 10’2″ dusky shark at Emerald Isle.  Though initially miss-identified as a bull shark, the ID was corrected later in the thread.  The fisherman helpfully took a picture with the shark laid out in profile, which made ID easy.

Puts those drum and rays I keep catching instead of sharks to shame. Image from ncangler.com (source)

Typically sharks pulled up in the surf are released, which hopefully happened to this big dusky (for the fisherman’s sake as well, since it’s a prohibited species).  It looks like either the fisherman or someone who ran into this shark earlier tagged it (note the spaghetti tag at the base of the dorsal fin), which is great because it means this shark’s presence on the beach has been or will soon be scientifically documented.

Hopefully this big beast survived the ordeal and will continue to prowl North Carolina waters.  I’m not a fan of the fact that it looks like the shark was taken completely out of the water, but duskies are generally a little more hardy than sensitive species like great hammerheads (for an interesting exchange on best practices for surf fishing sharks, check out these posts).  That said, congrats to the fisherman for an impressive and possibly ecologically significant catch.