Just got back from a little pre-school-year vacation visiting the Hot Girlfriend up in New Jersey, which has seen its share of shark sightings this summer.  New Jersey has a long history with sharks, what with the first high-profile string of shark attacks in U.S. waters occurring there (which would go on to inspire Jaws and, in turn, create the demand for most modern shark research).   Unfortunately for those who actually live in New Jersey, the state and the shore region in particular are now better known for fake tans, gelled hair, and Affliction t-shirts.  However, there is another group of visitors to the Jersey Shore that would probably make The Situation and company nervous at the beach (not that, in the episodes I’ve actually seen, they’ve ever set foot on the beach or in the water, but I digress).  These are the sharks of the Jersey Shore.

A list of sharks that make occasional or regular appearances off the coast of New Jersey would include most of the species known in the Northeast and Mid-Atlantic regions of the U.S.  Many of the sharks familiar to New Englanders are present, including blues, makos, baskers, the occasional thresher, rare porbeagles straying south in the winter, and great whites on their way up to Cape Cod for the summer.  Spiny dogfish also show up over the course of their migration between New England and North Carolina, but don’t seem to stick around very long.  Some southern sub-tropical species visit the Shore during the summer, including blacktips, sharpnose sharks, scalloped and smooth hammerheads, and lemon sharks.  Jenkinson’s Aquarium in Point Pleasant houses a lemon shark (that you can adopt) that was donated by a fisherman after being caught nearby.

The infamous Jersey Maneater was likely a bull shark, a theory supported by the location of three of the attacks; 16 miles inland in Mattawan Creek.  A bull shark would be an uncommon visitor to Jersey waters, but even rarer is the great hammerhead tracked by Hammerschlag et al. (2011) which traveled from the Florida Keys to an area of the Atlantic 500 km almost directly east of Atlantic City.  This represents the northern-most known extent of the great hammerhead’s range, and was only discovered this year. 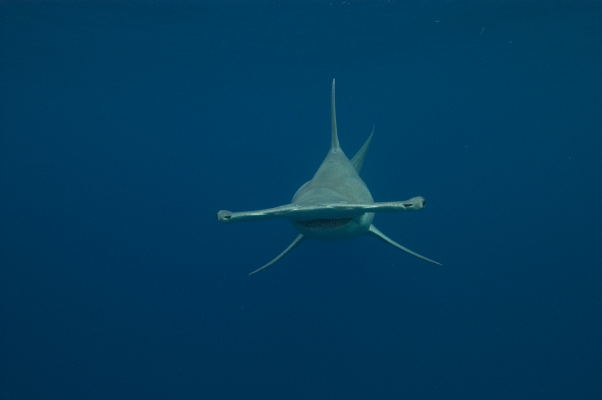 Where the party at? Photo by Andy Murch (elasmodiver.com).

Other species with a more mid-Atlantic range spend quality time at the Jersey Shore, and can be thought of as the residents just trying to tolerate all those fist-pumping migratory tourists.  Sand tigers seem to have taken a liking to New Jersey waters, and Dr. DeWayne Fox and his lab at Delaware State have been tracking their movements in the Delaware Bay and beyond since 2005.  As the largest resident sharks in coastal New Jersey, they pretty much own the place.

At least two other species have apparently decided that the beaches and estuaries of the New Jersey coastline are a fine place to settle down and have kids.  Sandbar sharks have been found to use Barnegat and Delaware Bays as nursery areas.  The pups are born in June and gradually leave the estuaries as they grow.  Merson and Pratt (2001) found abundances of newborn and juvenile sandbar sharks in Delaware Bay that were comparable to those found in the Chesapeake.  Smooth dogfish also pup and grow up in New Jersey estuaries, particularly Great Bay and Little Egg Harbor.  There they spend their first summer moving up into tidal creeks with the tide, feeding on shrimp and crabs (Rountree and Able 1996). 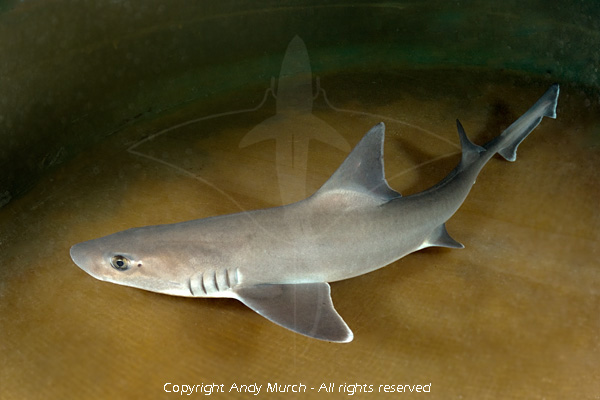 Gettin' down on the Jersey Shore. Photo by Andy Murch (elasmodiver.com).

An impressive array of sharks can be found along some of the most consistently crowded beaches on the east coast.  As the summer winds down and you try to get that last beach day or two in, take a moment to think about the other, marine vacationers and locals that are likely at the same beach.