A recent post over at Chronicles of Zostera referenced a paper that has become a monster in the world of marine ecology and shark conservation.  That paper: Myers et al. (2007).  It’s actually a relatively unassuming paper kind of tucked into an issue of Science, but it lit the elasmobranch world on fire very quickly.  Whenever you hear anyone, be they scientist, fisherman, manager, or Joe Schmo making conversation at a grad student party (yes, we are known to combine nerdy conversation with drinking) talking about how the cownose rays are gobbling up all the scallops, whether they know it or not, they are most likely talking about this paper.

Myers et al. (2007) has had such an impact, less than three years after its publication it’s considered by many to be a classic and has been affecting management policy and at least one movement in the fishing industry.  In the process, cownose rays may soon become more reviled than spiny dogfish (have fun with that, batoid fans).  That said, remember, this is science, so it’s always complicated.

First off, here’s a quick primer on marine trophic cascades.

Apologies for the blurriness above, but it should still be legible.  This diagram shows a highly simplified trophic cascade in the marine environment.  The basic idea is that fishing pressure removes the top predators (the large sharks).  This reduces the natural morality of their prey, and the mid-level or meso-predators enjoy a period of increased abundance and prosperity freed from the fear of being eaten.  However, the prey of these meso-predators now has even more of a cause to look over their shoulders, since their predators are now the ones running the place.  As a result, the forage species crash due to being devoured by increased numbers of things like sharpnose sharks, spiny dogfish, and of course cownose rays. 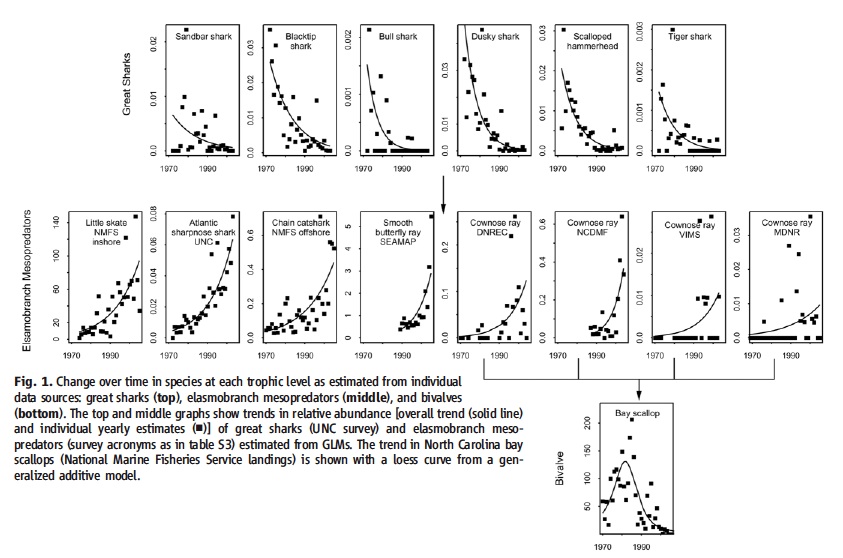 Using data from several different shark surveys (mostly longline), you can see marked declines in what the authors have termed the “great sharks” (the top row), occurring simultaneously with increases in meso-predator abundance (middle row), and finally leading down to a sharp downward slope for the humble bay scallop (bottom row).  The take-home message: not enough sharks means too many rays and not enough scallops.

So imagine my surprise when I attended AES over the summer and learned that many prominent shark and ray experts are actually pretty annoyed with this paper.  Enter Burgess et al. (2005).  Though this is actually a rebuttal to some older papers by Myers and frequent collaborator Baum, a lot of what is brought up is potentially relevant to the little monster they wrote up in 2007, and was referenced in most of the conversations I had about it in Providence.  The first and probably most striking thing about this rebuttal is the list of authors, people like George Burgess, Gregor Cailliet, Enric Cortes, Dean Grubbs, Jack Musick, Colin Simpfendorfer… these aren’t shills for the shark-finning industry here.  And they make a point several times in the paper to mention that they agree with Myers and Baum that sharks are in decline and that there is a need for concern.  What they are afraid of is that these papers that have had a disproportionate amount of influence over the shark conservation conversation (say that ten times fast) are based on flawed analysis of very small data sets, as well as an apparent lack of interest in testing any other potential hypotheses for the decline of sharks in the data.

One important thing to keep in mind is that the data used in Myers et al. (2007) was not personally collected by Myers or any of his co-authors.  Whenever you’re running an analysis on data that you didn’t have a hand in collecting, always make sure it’s reliable.  This is especially true in fishery-dependent data, where declines can be a result of changes in gear, lowered market price decreasing demand, and straight-up miss-identification.  Burgess et al. (2005) argue that the methods used in the type of analysis used by Myers et al. (2007) are wide open for exactly these issues, and that the authors seem to have done little or nothing to validate the data.

(I realize it’s pretty lame referencing a rebuttal that’s only really indirectly a rebuttal to the paper I’m actually writing about, but this was the closest I could find.  If a direct rebuttal to Myers et al. (2007) exists, please let me know, I’d be interested to read it.)

For a more even-handed synthesis of what is currently known, I recommend Ferretti et al. (2010) (tip o’ the hat to lab-mate Andrea for sending me a copy).  Aside from going over the concept of trophic cascades and even the debate over shark declines, it also offers some interesting food for thought on the meso-predators.  One thing that’s piqued my interest is that we hear all this noise about cownose rays when there are plenty of other small and mid-sized elasmobranchs out there eating commercially-important species.  The reason posited by Ferretti et al. (2010) is that other meso-predators may be regulated by fishing pressure themselves.  While cownose rays don’t really have much in the way of fishing pressure aside from the “Save the Bay, Eat a Ray” movement (which has yet to explode into a large-scale fishery), sharpnose sharks and smooth dogfish are taken as part of the coastal shark fishery, and spiny dogfish have their own directed fishery (though they’re blamed for plenty of ecological damage; see this post for my own personal rebuttal of most of that).  Also, the coastal ecosystem of the southeast U.S. may not have other marine predators capable of filling the gap in cownose ray coverage (in other systems other large predators such as tunas, billfish, and orcas may be able to regulate some of the same species fed upon by large sharks).  Due to these factors cownose rays may have been given a “get out of jail free card” that hasn’t been available to many other elasmobranch meso-predators, which is why they seem to stand out as such a model problem species.

Possibly lost among all this is the fact that cownose rays have effectively been villainized.  Due to this, it may be possible that any fishery that does open up for them will be a thinly-disguised eradication fishery.  This fishery will be on a species in which migration behavior, reproduction, and even true feeding habits are currently poorly understood.  I got a chill up my spine when towards the end of this article, a supposed fisheries policy expert makes the following quote: “There’s not a big fishery for them, so by default, it’s sustainable.”

Did the Myers et al. (2007) paper make the public aware of a shark conservation and bring the problem directly to their dinner plates and wallets?  Yes, and that’s probably a good thing.  However, is there still cause to proceed with caution?  Hell, yes.