I’m fashionably late to this party due to the holidays, but let’s see what I can do.  The shark blogs have been abuzz with the news that the Senate has passed the Shark Conservation Act, which is a big win for almost all sharks species in American waters.  An exception for smooth dogfish has riled up the conservation community.  Some are praising the act as a great stride in shark conservation, while others are less convinced about the exception for smooth dogs.  It turns out that this exception didn’t just pop up out of thin air, and its origins can actually be seen in the shark fishery of North Carolina.  In addition, research on the growth and reproduction of smooth dogfish suggest that this species may stand a better chance than any other shark of being able to sustain fishing pressure.  And what’s the deal with this 12% fin-to-body weight ratio?  Let’s dive in.

North Carolina actually has a decent-sized fishery for dogfish and coastal sharks, and a quick Google search into the state Division of Marine Fisheries policies turns up some interesting results.  It turns out that the precedent for the smooth dogfish exception has existed in North Carolina for over a year.  In North Carolina state waters sharks have been required to be landed with fins and tail attached since 2009, with the exception of smooth dogfish.  The reason smooth dogfish have been allowed to be processed at sea is that it represents one of the few high-volume shark fisheries in NC waters and thus fishermen have been allowed to process these sharks at sea primarily to save time, and also due to concerns over the quality of the meat (though the effect of finning on meat quality doesn’t hold up when tested even on a limited scale).

This proclamation is interesting because it basically shows that the bill headed to Obama’s desk is strikingly similar to the situation that already exists in North Carolina state waters.  Where it gets weird is the 12% fin-to-body weight ratio in the Federal bill.  While the NC DMF proclamation clearly states that the the weight of fins landed has to be 5% of the total weight of dogfish bodies, there has been talk of a study within the state agency to get that changed.  Since I can’t seem to find any paper or document supporting the new ratio (and would appreciate it if anyone could provide one), I’ll just present my own conjecture about this issue based on general knowledge and hearsay from researchers and managers in North Carolina.

Apparently fishermen were complaining that the 5% ratio was actually too low to accurately represent the fin/body weight relationship in smooth dogfish.  While this may seem like nitpicking when they’ve already scored the exception from the finning rules, if the ratio was indeed off then it means any given fisherman landing smooth dogfish could be busted for having a legitimate catch.  The 5% ratio is supposedly an average across all commercially fished shark species, and shark fin and body size can vary widely in proportion to each other.  One one extreme you have the massive sickle-shaped fins of the great hammerhead or the airplane wings of the blue shark, while on the other you have the almost comically tiny fins of the Greenland shark.  Smooth dogfish are on the more finny side of the ratio, and are also relatively slender in body shape.  It’s entirely possible that the fin/body weight ratio of smooth dogfish is greater than 5%, but 12% seems like a very high estimate and I’d be interested to see if this is the result of the NC DMF looking into this issue on a state level.  Again, the caveat is that all this is based on scuttlebutt that I’ve heard in conversation and not on anything published.

Also worth noting is that what happens in the case of the smooth dogfish fishery is not what we think of as “typical” finning, in which the fins are sliced off and the shark is thrown back alive to die painfully and slowly.  Smooth dogfish meat also has a decent market value, so the bodies of these sharks are landed along with the fins.  It’s little consolation to anyone who would rather not see any sharks killed at all, but at least these dogfish are given a swift and relatively humane death compared to larger sharks that are caught solely for their fins.

The million dollar question, now that we have a framework for where the smooth dogfish exception comes from, is whether the life history characteristics of these small sharks can sustain a high-volume fishery.  Fortunately, Christina Conrath and Jack Musick have published two papers on this just this subject (with help from James Gelsleichter on one of them).  According to Conrath et al. (2002), male smooth dogfish reach reproductive maturity at age 2-4, while females can start pumping out offspring between age 4 and 7.  This is relatively rapid growth to maturity by shark standards, and is actually comparable to the age at maturity for many commercially harvested bony fishes (herring, for example, mature around 3 years).  Of course bony fish also put out millions upon millions of eggs while sharks give live birth to a comparative handful of pups.  The trade-off is that those pups also show a much higher survivorship than bony fish larvae, so every pup born in a litter of sharks stands a good chance of becoming an adult.  Conrath and Musick (2002) found that litter size in smooth dogfish produce between 3 and 18 pups at a time, with a mean of over 9, with a gestation period between 11 and 12 months.  Compare this to spiny dogfish, a similar-sized shark and also the target of a high-volume fishery.  A female spiny dogfish takes 12 years to reach maturity, has a gestation period of two years, and produces 1 to 15 pups, with an average of about 6 (Nammack et al. 1985).  Even by the standards of other small sharks, smooth dogfish are a fast-growing, high fecundity species. 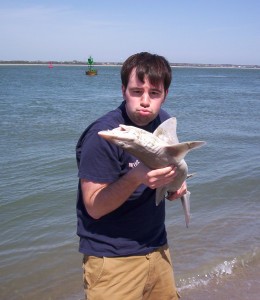 Me with a three and a half foot smooth dogfish caught at Fort Macon in Atlantic Beach, NC. This is still the largest fish I've ever caught on rod and reel and was released after this goodbye kiss.

Don’t get me wrong, the exception for smooth dogfish in the Shark Conservation Act is odd and a little sketchy, especially since I can’t seem to find anything concrete about where that 12% ratio comes from (though again, if anyone has any documentation of NC DMF looking into it like I’ve heard, let me know).  That said, smooth dogfish are possibly the best candidate of any shark for being able to sustain a large-scale fishery.  It sucks that any one species has to be thrown under the bus, but a combination of abundance and life history makes smooth dogfish potentially able to take it.

A lot of the criticism of the bill in its current form seems to be somewhat uninformed and reactionary.  Under this bill sharks will still be fished, but enforcement of catch limits and species protections will be much more effective thanks to the fact that all sharks will have to be landed whole.  Also, some of the criticism seems to assume that finning will entail the cruel practices seen in foreign fleets, but even for smooth dogfish that will simply not be happening.

Smooth dogfish are one of my favorite species.  They look awesome in pictures and fight like crazy on a fishing line, making me one of the few fishermen who actually goes out looking for them.  They are one of the last sharks that I would want to see go into serious decline.  That said, people need to work and people need to eat.  If good size limits are put in place to limit mortality on juveniles, I think that smooth dogfish stand a good chance of sustaining a fishery, a job that the science suggests they could do better than even their spiny cousins.  For the price of a fishery that already exists, we get better enforcement and protections for all other shark species, most of which are larger, slower-growing, and produce far fewer offspring.  I’d like to see where the higher fin ratio comes from, but otherwise I chalk the Shark Conservation Act up as a win.