Amid the constant talk of lowered biodiversity, invasive species, habitat destruction, global climate change, and any other examples of how thoroughly we as a species have wrecked the planet, it’s always good to hear an actual success story in conservation.  Obviously it’s never good news for a species to get to a point where it needs to be protected as an endangered species, but sometimes those protections come into play in time to not only preserve the species, but enable it to rebuild and eventually flourish.  However, what can be easily forgotten in the joy of saving a species is that that species will continue to do the things it was doing when it was rare, but now with a restored population.

Though comparatively rare, there are well-known, high-profile examples of endangered species rebounding successfully.  The American alligator was once on the verge of extinction, and thanks to listing under the Endangered Species Act has recovered to the point of being one of the most common predators in its range, as well as being able to sustain a well-managed (and televised) harvest.  The Marine Mammal Protections Act applies to pretty much any warm-blooded, air-breathing creature in the ocean, and has allowed seals and sea lions to recover to the point of being nuisance species in parts of the country.  Most recently, the successful reintroduction of gray wolves to the American midwest has lead to attempts to remove them from the Endangered Species list.

The argument for removing protections for some formerly endangered species is often based on the fact that these animals still need to eat, and still eat the things they used to while they were rare.  When gray wolves were virtually extirpated from the Yellowstone area, there were few encounters between livestock and wolves.  Now that the wolves have expanded, farmers and ranchers are unsurprisingly more worried about increasing predation on their herds than the preservation of the predator.

This is where the sharks come in.  Sand tiger sharks are still critically endangered in many parts of their range, but have been well-protected in the western Atlantic (the east coast of North and South America).  Thanks to these protections noticeable rebounds of sand tigers have been documented in places like New England, which lie on the fringe of these sharks’ range.  Thanks to their awesomely fearsome looks and mellow demeanor around divers, this species is very popular in aquariums and the dive industry.  Sand tigers are also a top predator even by shark standards, eating smaller sharks, rays, and large fish. 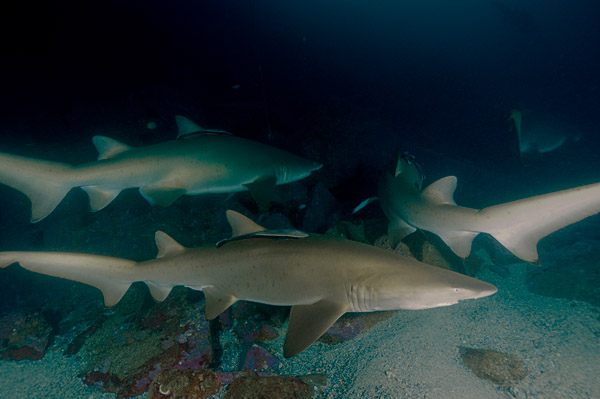 Aggregations like this are signs of a healthy sand tiger population, but these sharks still need to eat. Photo by Andy Murch (elasmodiver.com).

The diet of sand tiger sharks makes them a potential competitor of another top marine predator: humans.  Lucifora et al. (2009) looked at the sand tiger population in the waters of Argentina, where, as in U.S. waters, fishermen are prohibited from keeping these sharks and are required to release them when caught.  An expanding, protected shark population will have two main ways of colliding with fisheries; interactions with gear and consumption of the same species targeted by fishermen.  This paper makes observations on both of these issues in the recreational fisheries of Argentina.

In terms of gear interaction, sand tigers have a tendency to swallow their prey whole, which includes the hook when they’re taking bait off the end of a line.  Unfortunately, this results in a high incidence of internal damage from being gut hooked.  Lucifora et al. (2009) don’t provide any hard numbers on potential mortality, but being gut-hooked is no picnic for any fish, even a badass top predator.

Where the really interesting results come in is the diet analysis.  According to Lucifora and company, if you were to consider the Argentinian recreational fishery as another predator, it would have a 90% dietary overlap with sand tiger sharks.  What this means is that 90% of the species eaten by sand tigers are also sought by fishermen.  As the shark population (hopefully, from a conservation standpoint) expands, fishermen can expect to see more of their fish being stolen off the hook, and many of the good fishing spots will likely be the same areas where sand tigers hunt.  Also, though it’s unlikely that shark predation will significantly damage a fish population that isn’t already on the ropes for some other reason, the idea of shark predation on economically-important fish can potentially turn public opinion against their protection.

This presents an interesting parallel with spiny dogfish, which received a degree of protection from conservative management in the 2000s, and have pretty much always been accused of overfeeding on other species that are more popular with fishermen.  It also presents a parallel with some of the more successful recoveries among land-based predators.  It’s easy to champion conservation when the wolves don’t live anywhere near your backyard, but getting people to agree on the importance of predators when they personally share resources with those predators can be one hell of an uphill battle.

Sharks may be adaptable survivors, but people are much more adaptable, and as recovering shark populations reclaim their share of the marine environment we will need to decide whether we want to be good neighbors.  Ultimately, the animals we protect will continue to do what they’ve always done, and it’s up to us to decide whether to coexist or compete when they make a comeback.