It’s been quite some time since the last time I’ve written about porbeagles.  This cold-water shark is encountered relatively often off the coast of New England, where it is both a respectable sportfish (albeit one not fished as often as others because of its tendency to be most abundant in winter) and a pest to longline and gillnet fishermen.  As a member of the Lamnidae family, it’s closely related to great whites and makos, and as a result tends to be overshadowed by its more famous cousins. 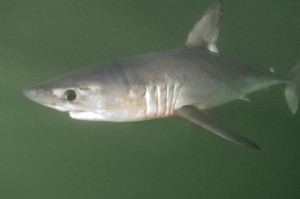 The cool thing about the porbeagle is that it’s one of the few sharks that is a cold-water specialist.  Like the great white and mako, the porbeagle has a system of closely aligned blood vessels called the rete mirabile that transfers heat generated by the swimming motion of its body back into its bloodstream, essentially making the porbeagle a warm-bodied animal.  This allows these sharks to be fast, active predators in an environment where most of the elasmobranchs are fairly sluggish skates and dogfish.

Porbeagles are also the target of a directed fishery in Canadian waters.  Though critically overfished (porbeagles were up for a CITES listing last year), there is some evidence that proactive management of this species has allowed porbeagles to rebound off of Canada.  This article sums up the whole situation nicely (via Underwater Times).  Is it possible that these sharks are capable of rebounding faster than originally expected?  Or could the original amount of decline have been overstated?  Either way it’s good to see this unique species continue to make a comeback.