As mentioned in my previous post, I’ve spent the weekend in Charleston hanging out with David “WhySharksMatter” Shiffman and taking part in the coastal shark survey run out of the Charleston SCDNR lab.  Since most of my work has been based on trawl data, I wanted to get a look at how a longline/gillnet shark survey works and what I could expect to see on one (many of the species found in South Carolina inshore waters can also potentially show up in North Carolina).  Also, I took a ton of pictures.  Read on to check out the best of them…

The survey uses two boats, one smaller skiff for the inshore work and a larger vessel for offshore surveys.  I got to ride along with the skiff to sample two sites in Charleston Harbor; one up in the estuary and one out at the mouth of the harbor where the open ocean comes in.  This survey design runs a 50-hook longline and gillnet simultaneously, and the two gears really do select for totally different species.  The soak times are 30 minutes or whenever it looks like something big has hit the gillnet (technically also a 30 minute soak, but the researchers are sensitive to the potential for mortality). 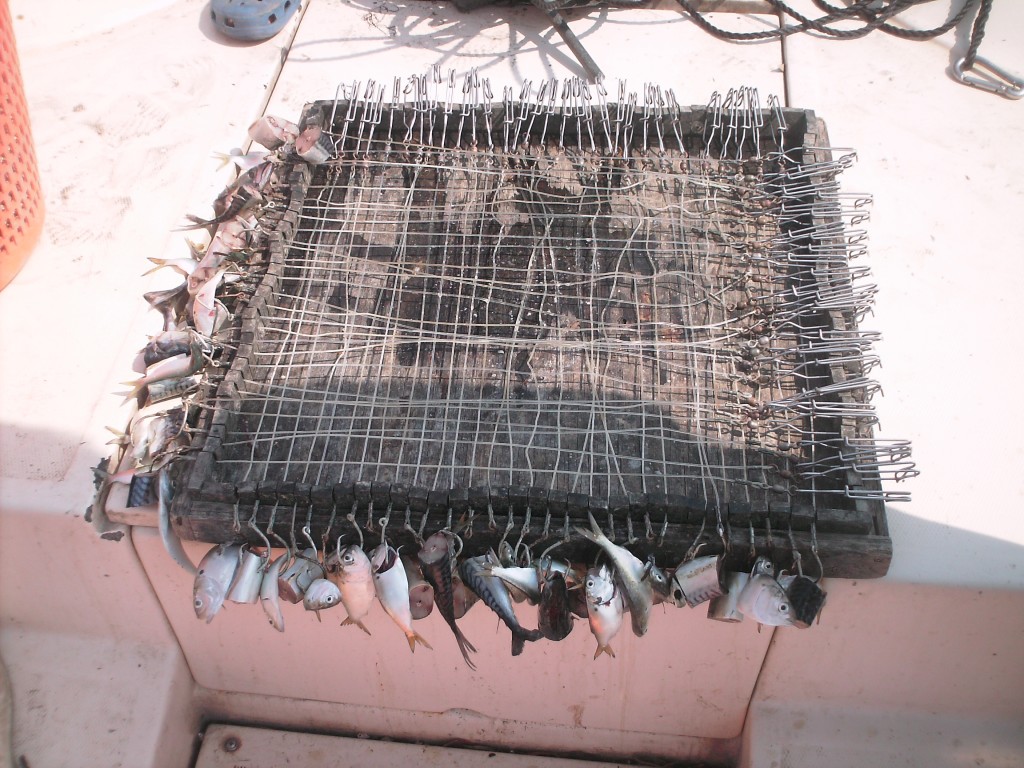 Baited hooks ready for deployment. These are clipped on as the line plays out and used to replace empty hooks when checking the gear.

These small menhaden were inescapable up in the marsh, so the bait was supplemented by cast-netting them. 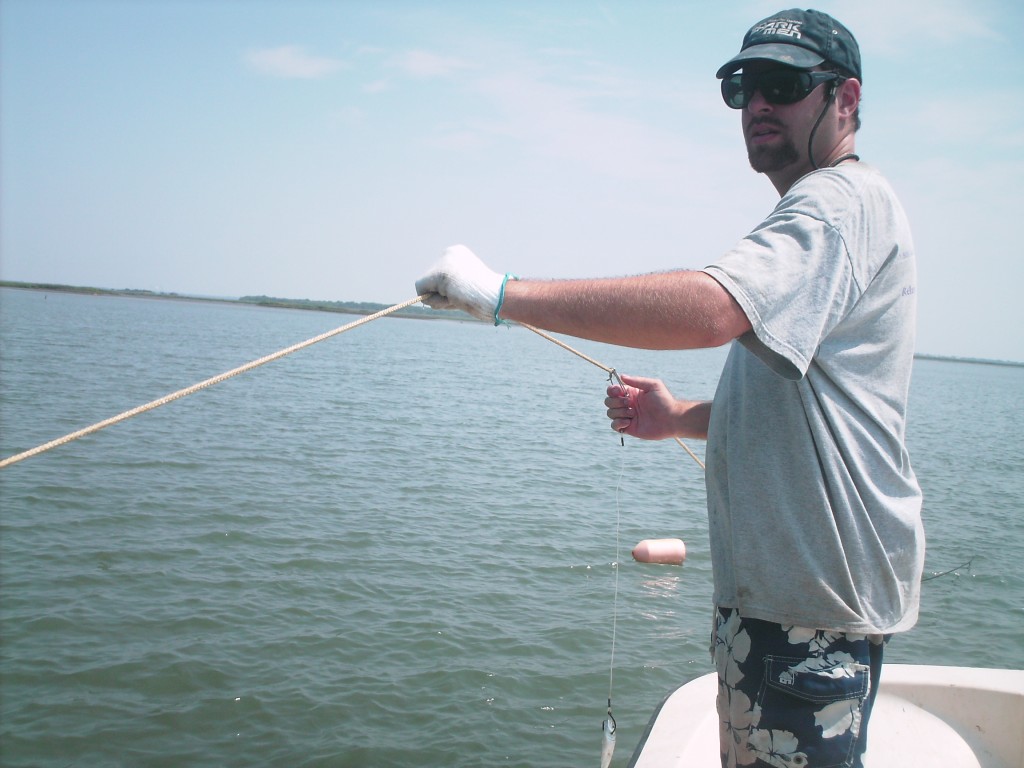 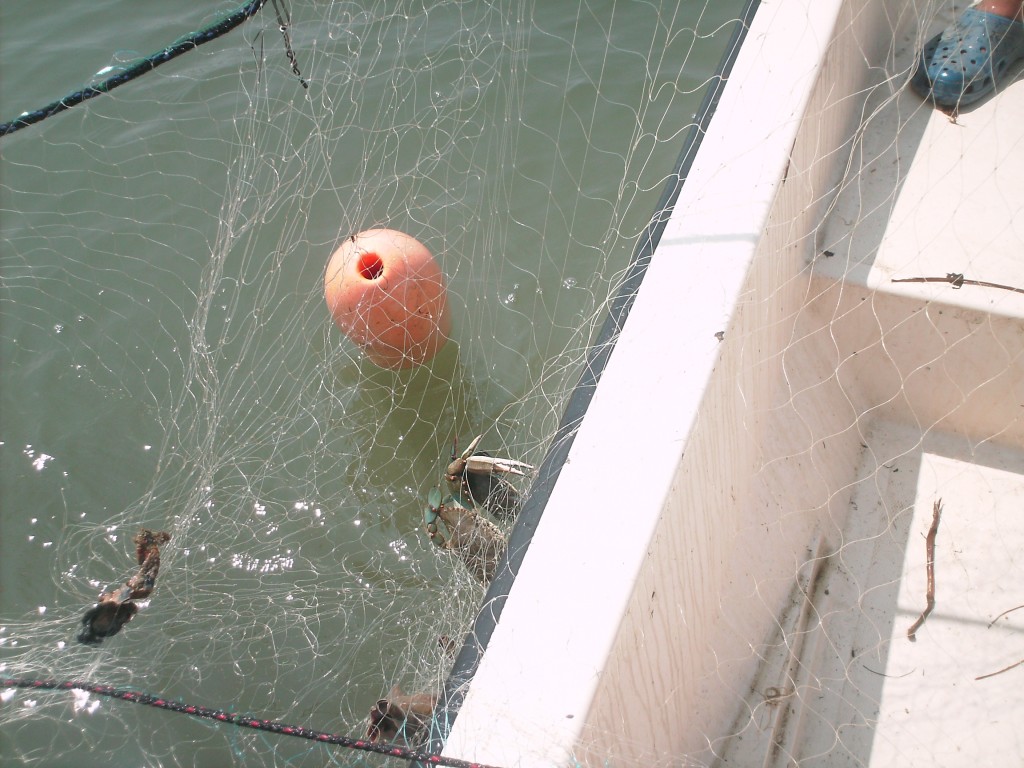 Blue crabs in the gillnet. These are a good sign, since they're a favorite prey of bonnethead sharks.

Sharks and rays caught in either gear are measured and let go, and non-sharpnose sharks are tagged before release (there are apparently already about 10,000 tags out on sharpnose sharks, giving a pretty good idea of what they’re up to).  While I was out as part of the crew we got 22 fish composed of seven elasmobranch species, including five different species of shark and two species of ray.  These included two sharks that may show up in North Carolina but I had yet to see in person.  Of course pictures were taken. 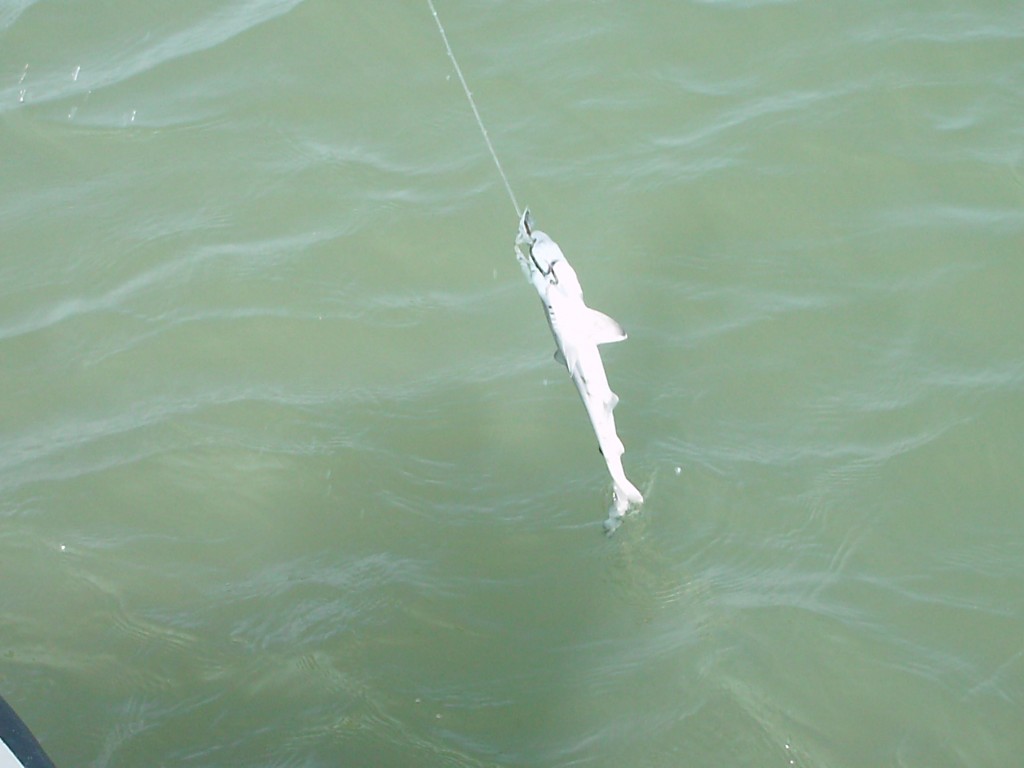 These newborn sharpnose sharks were totally fearless, attacking bait that was nearly as large as them on hooks bigger than their heads. 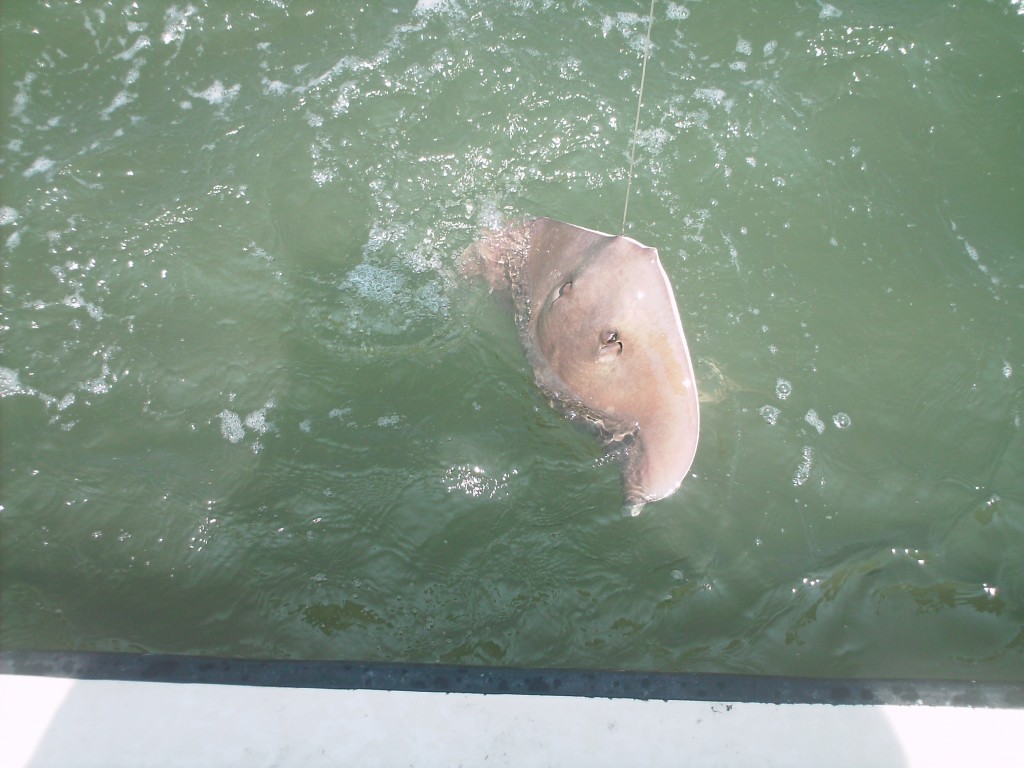 Bluntnose stingray, a batoid I wasn't all that familiar with. 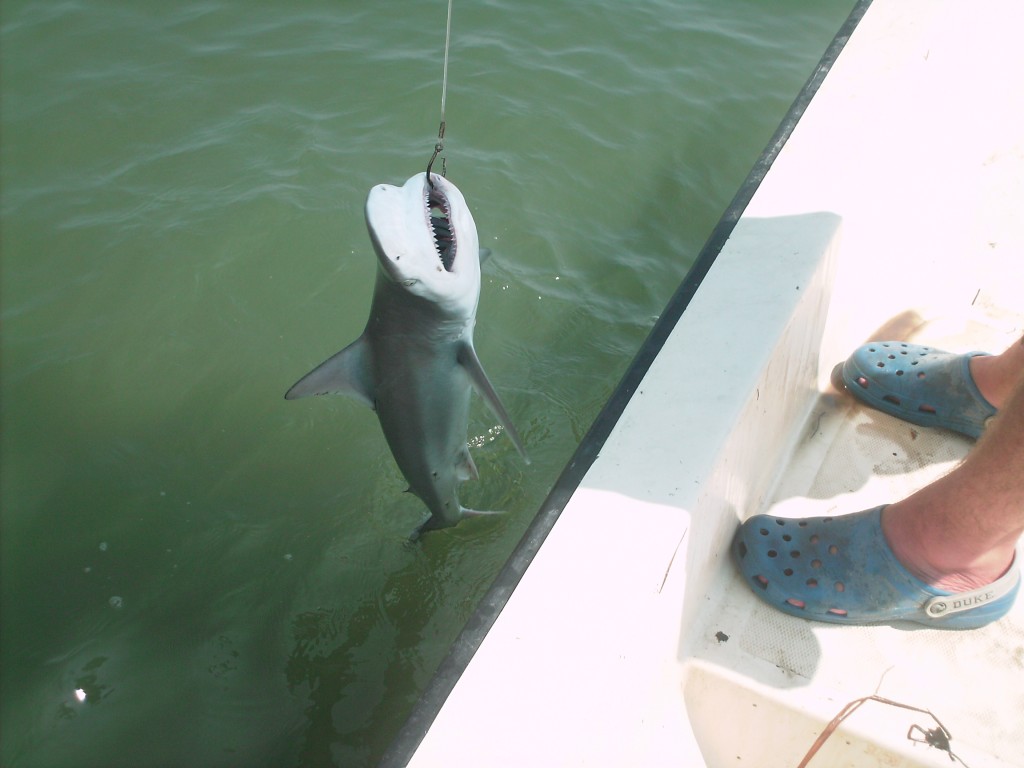 Juvenile sandbar shark. These were the largest sharks in the marsh, and seem to own the place. 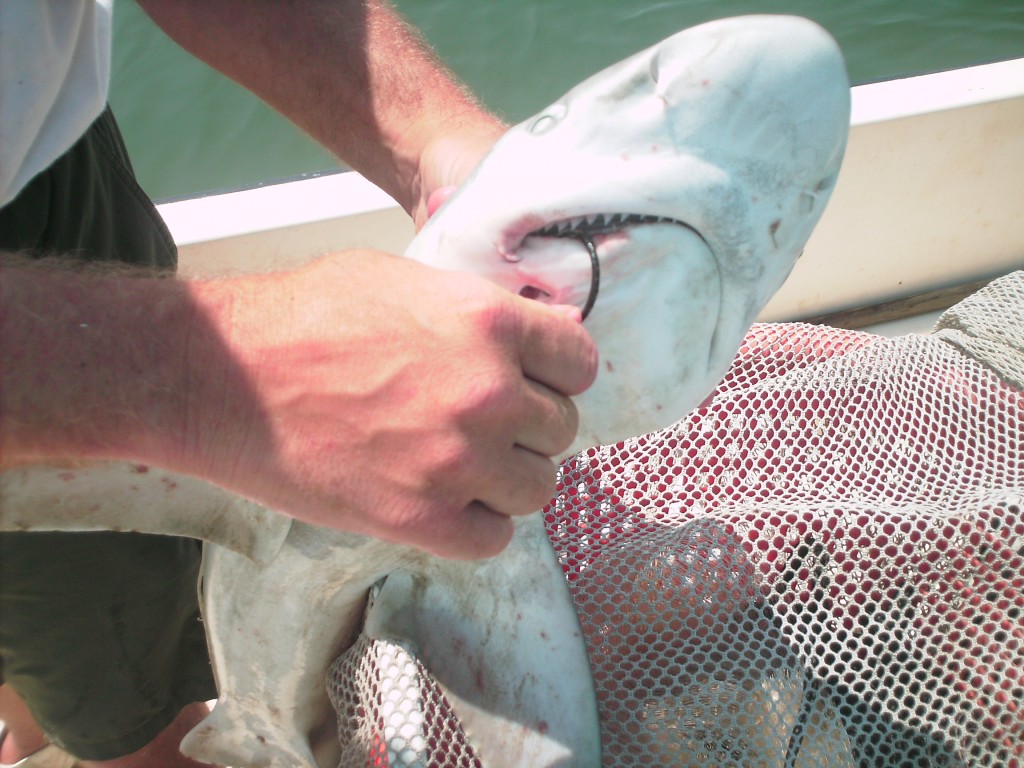 Showing off the sandbar shark's teeth while removing the hook. 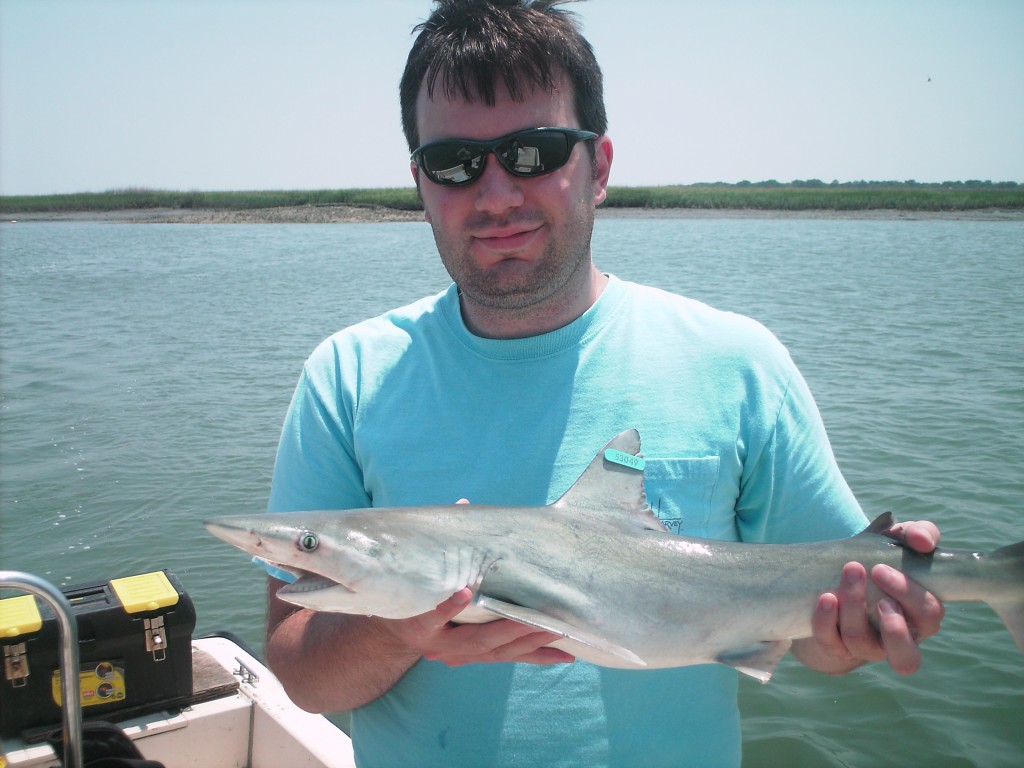 My first finetooth shark. These are a pretty cool-looking shark. 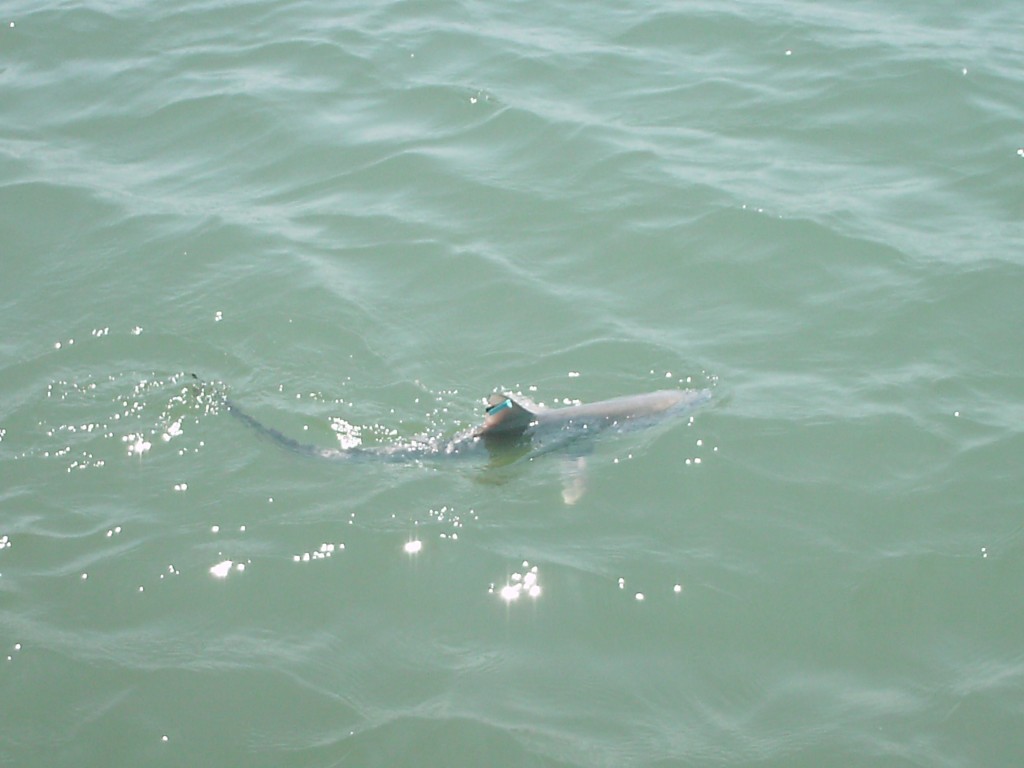 The finetooth stuck around at the surface for a minute after release, allowing me to get this suitably "sharky" shot. 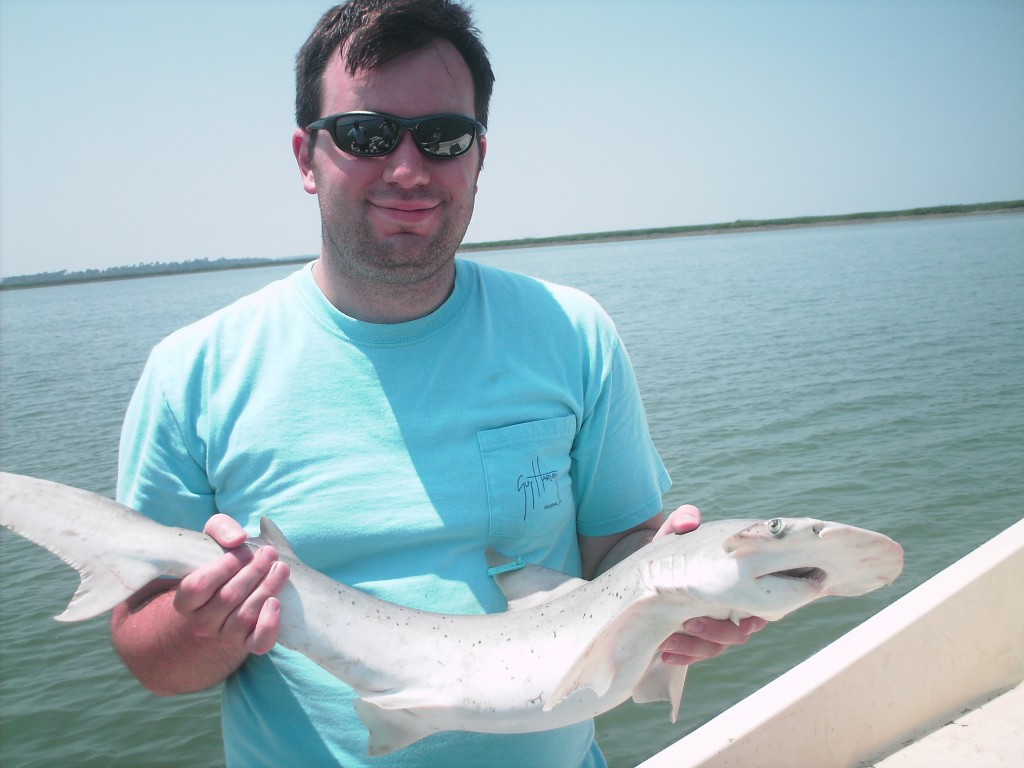 Bonnethead! I wish these would show up in North Carolina more often. 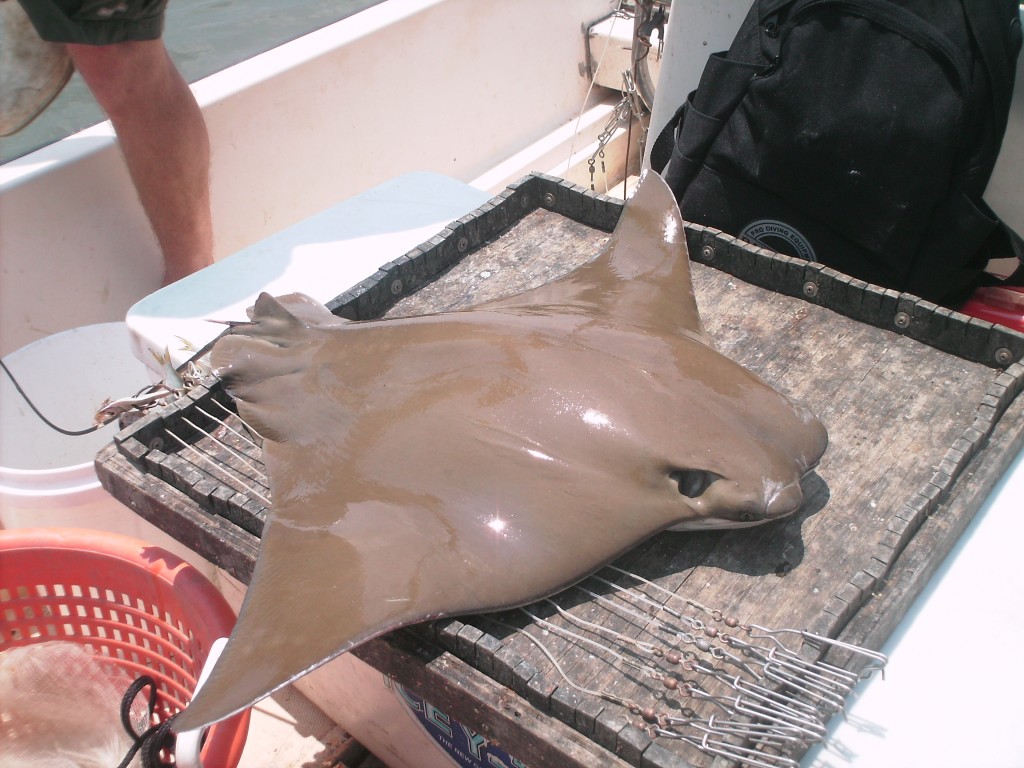 Hide the shellfish, it's a cownose ray! 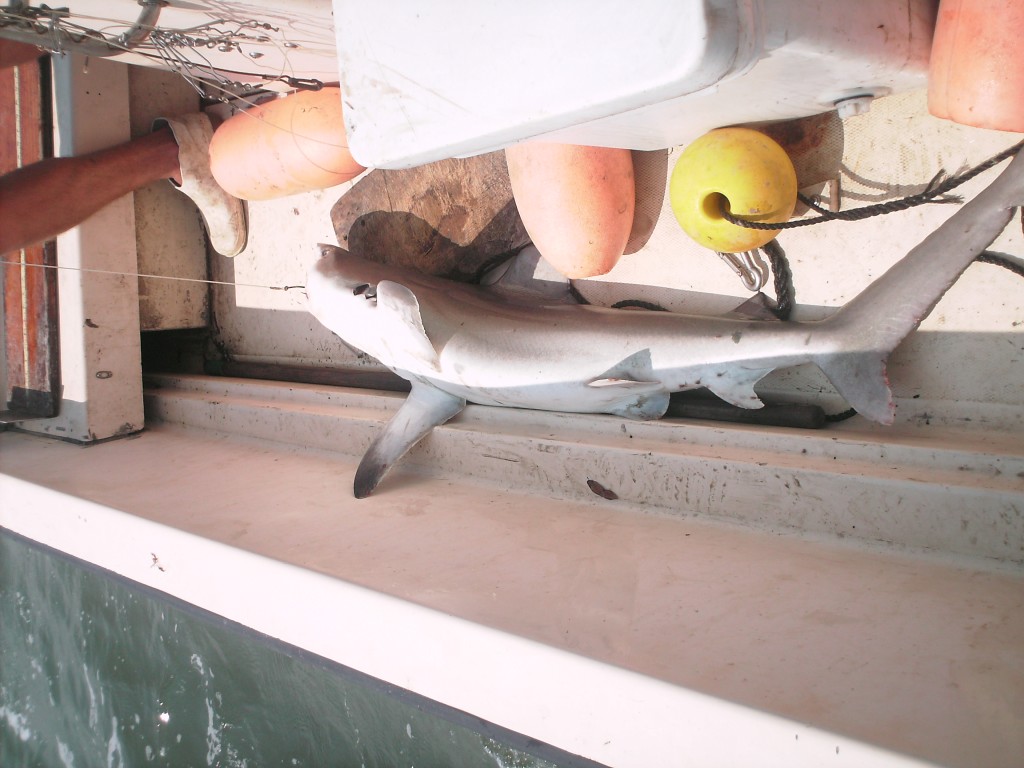 At the mouth of the harbor we got larger sharks like this 4.5-5-foot sandbar. 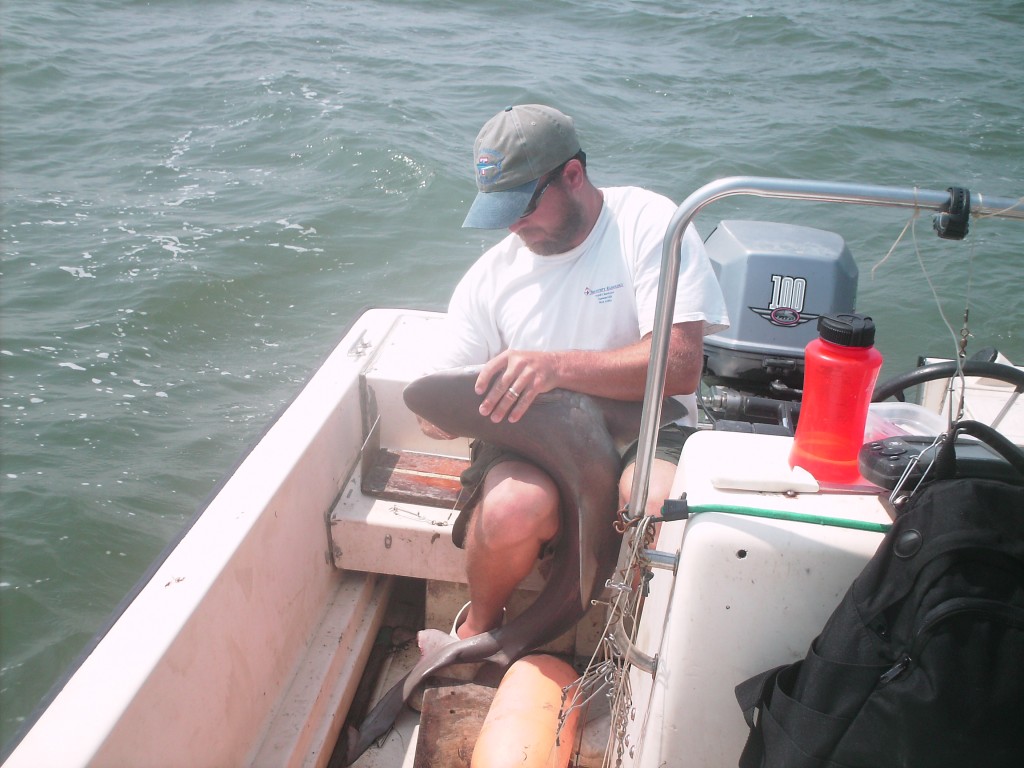 Bryan, the man in charge of the project, showing how to subdue to "butt-kicker-sized" shark. The secret is to keep the jaws closed. Easier said than done? 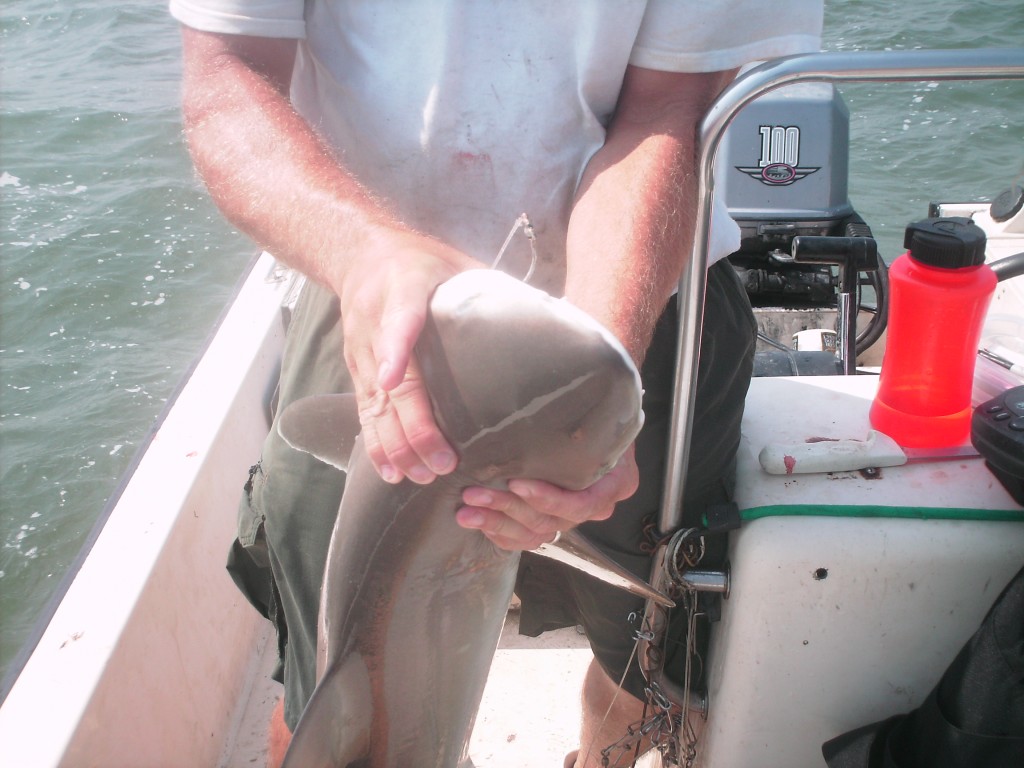 Blacknose shark, one of the harder species to ID. The smudge on the nose and the slightly yellow color help. 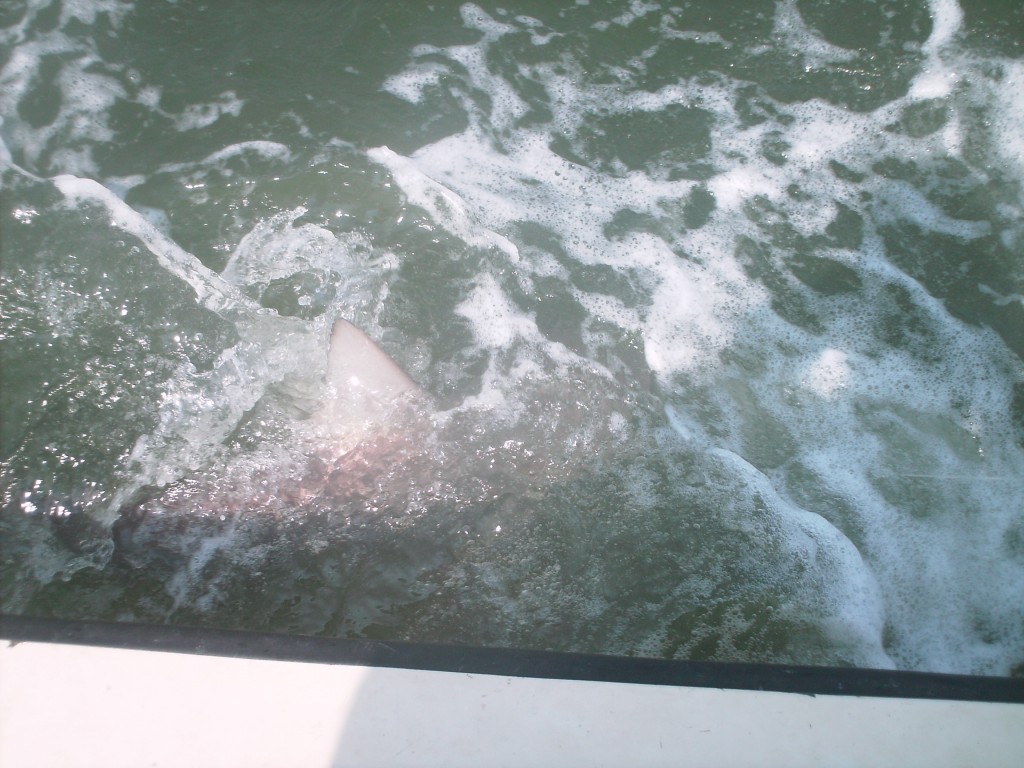 Big ol' sandbar alongside the boat.

Hope you’ve enjoyed this bit of field work.  Now back to that thesis…