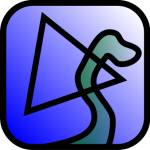 I’ll write my first epic Ocean of Pseudoscience post by touching on a subject near and dear to my small shark-loving heart, and in fact it’s the focus of my thesis research.  Ask any commercial fisherman (and even some scientists) if spiny dogfish are devouring commercially-important fish to the point where their stocks can’t recover, and most would reply with an emphatic “yes.”  It’s accepted as such a proven fact that this has been used as justification for an eradication fishery in the Pacific Northwest (Beamish et al. 2009) and more recently has been used by commercial fishing interests to push for higher quotas.  So ingrained are these assumptions about spiny dogfish feeding habits and so deeply unpopular is Squalus acanthias that even Bigelow and Schroeder got in on the act with their seminal work Fishes of the Gulf of Maine.

“Voracious beyond belief, dogfish deserve their bad reputation among many fishermen.” – Bigelow and Schroeder, Fishes of the Gulf of Maine

So are dogfish really the proverbial fox in the henhouse of our fisheries, and therefore need to be controlled through fishing pressure, or is this a case of these diminutive yet scrappy elasmobranchs taking the rap for either our mistakes or the dirty work of other species?  As is typical of the ocean and science in general, the answer isn’t exactly black and white. 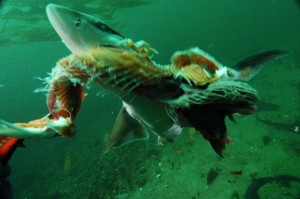 "Im in ur fisheriez, eatin ur codz." Photo by Andy Murch.

As a cursory glance through my gut contents posts will tell you, spiny dogfish are pretty much generalist piscivores.  They are most commonly blamed for keeping the stocks of cod and other groundfish down on Georges Bank, and for demolishing salmon stocks in the Pacific.  Does the science back this up?

In the case of salmon, there is at least one respectable source that points to dogfish potentially being a major predator of salmon in the the waters of British Columbia (though these may be Squalus suckleyi rather than Squalus acanthias).  Beamish et al (1992) documented a massive influx of spiny dogfish at the mouth of the Big Qualicum River that coincided with the release of salmon smolts from the river’s hatchery.  They estimated that in 1988 this feeding aggregation may have devoured nearly the entire 7.7 million smolt release.  However, during other times of the year the number of dogfish in the area was drastically reduced, suggesting that rather than targeting salmon these sharks may have simply been opportunistically gorging themselves on a predictable source of food.

Considerably more work has gone into the diet of spiny dogfish in the Northwest Atlantic.  Bowman et al. (2000) is an absolutely epic assessment of the diets of everything caught in the NOAA/NMFS bottom trawl and longline surveys between 1963-1984.  Within this gigantic paper can be found a summary of the stomach contents of 2,662 spiny dogfish.  53.7% of the total stomach contents by weight were made of up fish, of which river herrings, tonguefish, and small hakes such as spotted and silver hake were the most prevalent.  No sign of Atlantic cod, striped bass, pollock, and only a small amounts of fluke and haddock.

Link et al. (2002) took on the question of predatory interactions between dogfish and groundfish directly using an even more epic data set (40,756 stomachs!).  According to this paper there are some significant predatory effects, though the results may be surprising to those expecting dogfish to be munching on cod and haddock.  The table below shows the estimated annual consumption of some key species estimated by Link et al. (2002) and, cleverly, also shows commercial landings for the same year.

Minimum, maximum, and mean consumption (metric tons) of select species by spiny dogfish and winter skate from 1998, plus fishery landings from that year. From Link et al. (2002).

With the landings there for comparison the predatory impact by dogfish on commercially-important groundfish is almost laughable.  3 metric tons of haddock compared to 6,200 mt landed.  34 mt of cod compared to 14,400 eaten by us.  However, if you were fishing for Atlantic herring, mackerel, or silver hake, these numbers might be worrisome.  That said, those three species are known forage fish that occur in high numbers and are eaten by just about everything.  If you want to demonize dogfish for eating herring and mackerel, then you’ll also have to demonize most of those same species that dogfish are accused of eating (Bowman et al. 2000), as well as bluefish, striped bass, swordfish, dolphins, whales, seals…

So are dogfish really consuming so many fish as to single-handedly drive fish stocks down?  Feeding habits data doesn’t seem to suggest this, nor do studies on their digestion seem to support the idea that dogfish could even burn calories fast enough to eat other fishes into extinction.  According to Brett and Blackburn (1978) a spiny dogfish only needs to eat about 1.5 times its body weight for maintenance-level metabolism.  This puts its metabolic rate on the low end for elasmobranchs and considerably lower than most bony fish.  Simply put, a spiny dogfish may not be able to digest its food fast enough to live up to its reputation.

In conclusion, the cod of the world probably have relatively little to fear from spiny dogfish, and the pelagic schooling fishes that seem to actually make up the bulk of the spiny dogfish diet are a resource shared by too many species to pin their fate on any one predator.  Though the spiny dogfish is a formidable predator, it is also an opportunistic one and is more likely to find new species to feed on rather than continuing to consume species that are in decline.  The idea that spiny dogfish bear so much responsibility for continued imbalance in fish stocks and heavily-fished ecosystems speaks to a level of scapegoatism that ranks up there with the eradication of wolves to make room for livestock.

Note: for some reason Research Blogging was acting very weird as I generated these citations.  I will try to update these when I get the chance.