I just got back from a nice, much-needed weekend in the Outer Banks, and had an opportunity to check out the latest addition to the Nags Head coastline.  Jennette’s Pier has a long history among Outer Banks fishing piers, but was blown away shortly after being purchased from the original owners by the state.  The first of a proposed plan to build educational fishing piers near the three North Carolina Aquarium locations, Jennette’s Pier was certainly getting a lot of attention while I was there.  I managed to find time to take a look (technically walking on is free, though there is a suggested $2 donation) and was fairly impressed by what I saw.

Like most things involving North Carolina and fishing, the opening of the new, sexy, state-owned Jennette’s Pier has not been without controversy.  The owners of the Outer Banks’ privately-owned fishing piers are afraid they won’t be able to compete with a larger, more advanced pier that has the extra benefit of being subsidized by your tax dollars.  Those running Jennette’s Pier claim that their pier will cater more to tourists and less-serious fishermen looking for a more educational experience, while the “hard core” fishermen and regulars will continue to fish at the nearby Avalon, Nags Head, and Outer Banks piers. 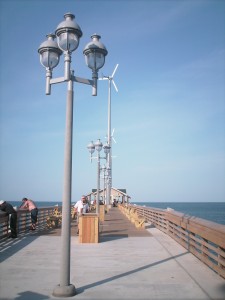 Looking at the specs on the new pier, it’s easy to see why the owners of the other piers would be intimidated.  I’ve frequented the other Outer Banks piers, and the 1,000 feet that Jennette’s stretches out into the Atlantic seemed like an almost absurd length as I walked it.  Every other fishing pier in North Carolina (at least the ones I’ve been on) is made of wood, which means that every time a hurricane or major storm hits, the piers are gradually whittled down as the owners can afford to replace less and less of them.  As a result, while most North Carolina fishing piers started out comparable in size to Jennette’s, now some of them barely make it past the breakers at low tide.  Added to this is the fact that the new Jennette’s Pier is made of reinforced concrete, which theoretically makes it better able to survive a beating from a hurricane.

Overall the new pier is very clean-looking for a fishing pier, which is a symptom of it only being open since May 21st.  That may change as it gets more use and gradually builds up the nicks and scratches and dried fish guts that add character to the older piers, though I can picture the Jennette’s staff also putting effort into keeping it clean for the tourists.  This does bring up the valid argument about the “target audience” of this pier, and it’s not just reflected in the cleanliness. 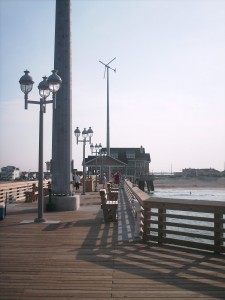 Heading back up the pier towards the beach and pavilion.

Many of the features of Jennette’s Pier are aimed at a crowd that is decidedly not salty fishermen.  The pier does have some features that are definitely pluses for anyone whose primary interest is fishing: the readily available nets for bringing up fish to heavy to just haul up onto the pier (though I can see these getting stolen), available cleaning stations, and obviously the fact that it stretches almost out to the Gulf Stream.  However, the pier seems to be aimed more at tourists and out-of-towners who are curious about the local ecosystem and how a fishing pier works.  There are informational plaques up and down the pier concerning everything from how waves are formed to how to measure your fish.  Also, the entire pier is apparently powered by the wind turbines running down its length, and there are regularly scheduled alternative energy demonstrations.  The pavilion includes a few aquarium tanks featuring species seen around the pier, and also has a large, souvenir-filled gift shop.

This all makes perfect sense coming from the NC Aquarium, but I can see where some of it may be a turn-off to regulars at the other piers.  While fishing is one of my favorite non-science activities and I’ve spilled my share of croaker blood at other fishing piers, I’m also an ocean nerd and transplanted Yankee at heart.  Some of the educational and green features of Jennette’s Pier that I thought were pretty cool might not be quite as impressive to locals and regulars who would probably be even more amused than I was by the “how to clean your fish” signage at the cleaning station.  This is a pier that is almost guaranteed to be regularly filled with the people that pier regulars barely tolerate at best, and the other piers may keep a lot of their old business by offering locals a place where they can avoid the tourists.  Another minus, this pier is pricey: fishing access is $12, so you’d better either be ready to spend the night (during the summer Jennette’s is open 24 hours) or be awesome at catching fish.  Finally, and what may be the final nail in the coffin for those looking for a no-frills old-school fishing experience, this is an alcohol-free pier.

The spiffy new Jennette’s Pier certainly has the goods to be a serious fishing pier, and fishermen at the end seemed to have no problem getting a decent number of Spanish mackerel when I checked it out.  However, the educational materials may not be every fisherman’s cup of tea, and the place is practically designed to be a tourist magnet (but a family-friendly one).  How well the other piers coexist with the new kid on the block may depend on how the target audience breaks down.  And also where the best fishing is.