The Order Squaliformes, home to the dogfish sharks, is one of the most diverse groups of sharks currently swimming the oceans, second only to the Carcharhiniformes in sheer number of species.  Within that order is the Family Squalidae, made up of the very familiar spiny dogfish Squalus acanthias (the star of this blog) and a bunch of species that look pretty similar to it.  New species tend to pop up in this group, since most of these sharks look pretty similar and the majority of them live in the deep sea.  Recently one species was “rediscovered” in plain sight; the North Pacific spiny dogfish Squalus suckleyi had been considered a population of S. acanthias but has been restored to species status by genetic analysis.  Now, researchers have found an entirely new Squalus species in the Tashi Fish Market in Taiwan.  Say hello to Squalus formosus.

White and Iglesias (2011) gave Squalus formosus it’s pretty cool-sounding scientific name after the geographic location where, so far, all the specimens have been found.  “Formosa” is the Portuguese name originally given to Taiwan.  This species shares its range with at least four other similar-looking dogfish, including wide-ranging species such as the shortnose spurdog Squalus megalops, shortspine spurdog Squalus mitsukurri, Japanese spurdog Squalus japonicus, and longnose spurdog Squalus blainville.

When a new species is found, the first few specimens are classified as “type” specimens.  The first specimen collected is called the “holotype”, and the next few are referred to as “paratypes” and are used to verify the measurements taken on the holotype.  And everything, I mean everything, gets measured.  Measurements as obscure as the number of fin rays or number of teeth can be the difference between a totally different species and a regional variety.  Taxonomy may be dry and tedious, but you can’t say identifying a new species isn’t hard work.

Luckily, both male and female type specimens were available at the Tashi fish market, and White and Iglesias went to work dutifully measuring everything and comparing it to the other common deepwater dogfish found in Taiwanese waters.  So what does this beast look like and how does it compare to its close relatives?

Squalus formosus. From White and Iglesias (2011). 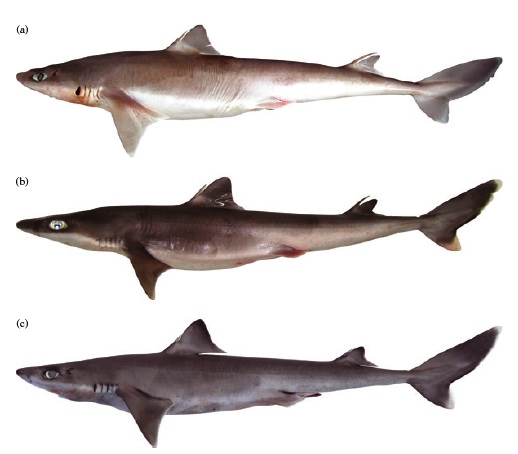 Other common dogfish from Taiwanese waters. A.) S. brevirostris B.) S. japonicus C.) S. mitsukurri. From White and Iglesias (2011).

The most obvious feature of Squalus formosus is that it’s very well-armed.  The first dorsal spine is huge (nearly the height of the fin), juts straight up, and is rather broad at the base, and the second is nearly as wicked.  As someone who has handled hundreds of Squalus acanthias, those dorsal spines intimidate me.  This is one of the features White and Iglesias (2011) use to distinguish this new dag from those already known in local waters.  The dorsal fins are proportionally large and more upright on S. formosus than other East Asian dogfish, and the first dorsal comes up over the pectoral fins, giving this new shark a somewhat athletic appearance, like a spinner shark with spines.  The white margin on its tail is also distinctive, but is shared by S. mitsukurri, but here again that gigantic dorsal spine is what sets S. formosus apart; S. mitsukurri has an absolutely pathetic spine by comparison.

New species are not uncommon news in marine biology, but mid-sized shark that is apparently vulnerable to fishing gear is noteworthy, mainly because it illustrates the urgent need for scientists to get out there and ID stuff.  This entirely new shark was not found by multi-million dollar efforts like the Census of Marine Life, it was found for sale in a fish market in Taiwan.  This is why the apparent lack of taxonomists coming out of grad school is distressing.  This isn’t some obscure invertebrate (though those small squishy critters are also important), this is a cool-looking 3-foot shark that is already experiencing fishing pressure, and we’ve just figured out what it is.  Taxonomy is tough and seems boring, but it is important, dammit.

Tip o’ the hat to David for sending this my way.