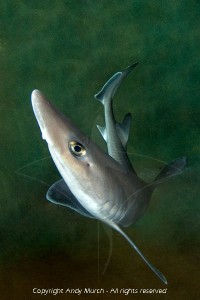 Another round of shark news links.  Enjoy.

The biggest news is likely the release of the International Shark Attack File’s annual report.  The main gist: shark attacks are up worldwide, down in the US.  Of course that high is a total of 79 attacks worldwide, with a whopping six fatalities.  This means that shark-related mortality has claimed less than a billionth of the world’s total population.

Sharks (including the newly redescribed North Pacific spiny dogfish) are getting some great protection in the waters of British Columbia.  The Vancouver Sun continues their generally good coverage of shark news with an article on how sport fishermen have agreed to limit their impact on Western Canada’s sharks.

Sport fishermen in general have been very helpful in the field of shark research.  This begs the question: how good is catch-and-release sport fishing for the sharks?

It’s long been known that the very structure of shark skin both allows the sharks to be very efficient swimmers while thwarting fouling organisms like barnacles that grow like weeds on some other marine animals.  It turns out that the dermal denticles on shark skin may also be a key to sharks’ legendary immune system, and my have applications for human health as well.

For your daily dose of predation, Underwater Thrills asks: what took a bite out of this sixgill?  Sixgill sharks share their Pacific range with orcas, great whites, and other sixgills, all of which are viable suspects in this murder mystery.

Before the day is out, check out the awesome Google logo commemorating Jules Verne’s 20,000 Leagues Under the Sea.  It has a basking shark on it!

Not shark-related, but important to remember for those of us currently in or trying to get into academia.  Yanked from my friend Steve’s Facebook profile.

That’s all for this bit of linkage.