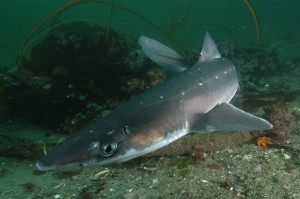 A combination of genetic and physical taxonomic features distinguish S. suckleyi from S. acanthias.  The genetic differences have already been discussed in my older post, and I’m not nearly well-versed enough of a geneticist to go into detail about the methods.  The basic gist is that North Pacific dogfish form a separate genetic group from dogfish populations anywhere else on the planet, and are different enough to be genetically isolated from their counterparts elsewhere in the world.

In the past physical differences between North Pacific and standard spiny dogfish were chalked up as being within the bounds of the natural variation for the species.  That said, there are apparently some consistent morphological differences, though they are very subtle and would probably be tough to distinguish even if you had a shark from each species lying next to each other.  According to Ebert et al. (2010), features unique to North Pacific spiny dogfish when compared with S. acanthias include a shorter, more rounded snout, a dorsal fin farther back from the pectoral fins, pelvic fins starting closer to the the second dorsal fin than the first, and an average of 99 vertebrae.

Where this gets interesting from a fisheries management perspective is the differences in life history between North Pacific and spiny dogfish.  Both species are among the most k-selected vertebrates, with slow growth, long life spans, and relatively low reproductive output.  Nammack et al. (1985) calculated that female spiny dogfish from the Atlantic mature at 12 years of age, and have a two-year gestation period and a maximum size of a little over a meter.  In contrast, North Pacific spiny dogfish can apparently take up to 25 years to mature and can live up to 100 years, reaching a maximum size of a little under 2 meters.  What this means is that not only do fisheries managers in the north Pacific have to take into account that they’re dealing with a different species, but also that they are dealing with a species that replaces its numbers over twice as slowly as spiny dogfish elsewhere in the world.

Interestingly, Squalus suckleyi was originally considered a separate species when first described, then lumped in with the rest of the spiny dogfish.  For this reason North Pacific spiny dogfish aren’t technically a “new” species, but an old one that has been sitting under our noses for a while lumped in with another species.  Spiny dogfish are known to be highly variable in size and life history characteristics by region, but it’s previously been assumed that this was simply due to natural plasticity.  Other relatively isolated populations of spiny dogfish exist (there is a population in the Black Sea, for example).  It would be interesting to see if any of these populations may also be completely new species.