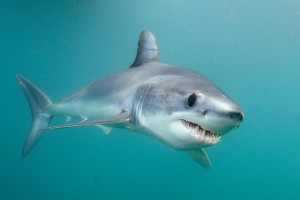 The poor animal being subjected to this post's link pun. Photo by Andy Murch (elasmodiver.com).

Unfortunately a punishing round of grading exams and lab reports has kept me from posting since about Monday.  I’m through it now, but now I’m far too brain-fried to offer up any substantial posts.  While I recover my aching brain, enjoy these offerings from the bounty of the internet.

You’ve been giving to the Gam’s Donor’s Choose Initiative, right?  I know I have, particularly to this worthy project.  Some of these classrooms have only the equivalent of half a month’s rent left to meet their needs, and some of them are rapidly closing in on their cut-off dates, so let’s help these kids get a worthwhile science education.  Because you don’t really want the future leaders of America believing things like this, do you?

Has CSI jumped the shark?  Check out David’s analysis of the most unfortunate interaction between sharks and partying since Spring Break Shark Attack.

Also over at Southern Fried Science, new research reveals the hagfish’s place in evolution, but muddies its place in our evolution.

Dan from The Endolymph helps out a friend with some fieldwork and hilarity ensues.  On a more scientific note, what can a fish’s earbones tell us about where it’s been?

Dr. Bik at Deep Sea News offers up reflections on the 6-month anniversary of the Deepwater Horizon oil spill.

John from Chronicles of Zostera gives us more oil spill action by documenting a scientific brawl that didn’t end up happening.

Underwater Times has an interesting article debunking the myth of sharks’ seemingly supernatural sense of smell.  It turns out that instead of smelling a drop of blood in an Olympic-size swimming pool, they can only smell one drop in a typical above-ground pool.  Sigh…

In the ongoing three-front conflict between great hammerheads, fishermen, and tarpon on Florida’s Gulf coast, another victory for Sphyrna mokarran.  Tip o’ the hat to the Dorsal Fin for this one.

For even more link love, check out the Carnival of the Blue over at Cephalopodcast.

Hope that tides you over until the next time I’m able to muster a proper post.  Enjoy.