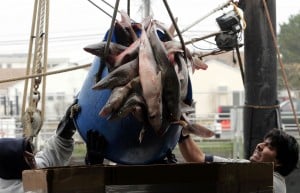 Tip o’ the hat to Shark Advocates for bringing this to my attention.  According to the Press of Atlantic City, the Mid-Atlantic Fisheries Management Council has tentatively approved a 78.5% increase in the Atlantic spiny dogfish quota for this year.  This would bring the coast-wide quota up to 35.7 million pounds, up from the previous increase to 20 million pounds.  The council has also voted to increase the daily trip limit from 3,000 to 4,000 pounds.  Because the spiny dogfish stock is jointly managed by both the MAFMC and the New England Fishery Management Council, these measures require the NEFMC to approve identical increases and are also pending approval by NMFS and public comment.

This increase comes as the Atlantic spiny dogfish fishery is being assessed by the MSC for sustainability, and represents a dramatic increase only two years after the stock had been declared recovered by NMFS.  However, key to that recovery was the maintenance of low quotas (which helped Pacific spiny dogfish become the world’s first certified sustainable shark fishery) and the caveat that lean times are coming for dogfish.  The offspring of the cohort of females that was severely overfished in the 90s (resulting in almost no evidence of recruitment in the late 90s – early 2000s) would have begun maturing and reproducing themselves in the next few years.  That generation of female dogfish isn’t there in sufficient numbers, which makes a second crash entirely possible.  This long lag time between overfishing and crashing is one of the perils of managing a long-lived, slow-maturing species and is something that should still be a concern going foreward.

The article does a good job breaking down most of the reasoning behind and potential consequences of the decision to raise quotas so dramatically.  As expected, dogfish remain deeply, profoundly unpopular with fishermen, and the old justification of “balancing out the ecosystem” is prominent among more practical considerations like having a species to fish in the winter.  I’ve stated multiple times that I think population control is a terrible reason for a fishery; I’m much more convinced by economic reasoning than “we don’t like them and want to see less of them” when it comes to industrial-scale fishing.  I’ve covered claims that dogfish single-handedly keep other fish stocks down before (in fact, it’s what I’ve spent the last two and a half years researching), and fishing as ecological engineering sets a bad precedent with huge potential for unintended consequences.

Aside from the fact that fishermen are just plain annoyed by dogfish, a big reason why population control remains such a popular reason to fish dogfish is that fishermen get screwed on the market price of dogfish.  Nearly every part of the shark is utilized in some way: fillets and belly flaps go to European fish markets, the fins go to soup, the skin is used to make sharkskin leather, the liver oil is used for products of varying quality, and even the cartilage is ground up for products of extremely dubious quality.  The market price for dogfish meat doesn’t even scratch the surface of the potential markets for dogfish products.  Fishermen generally target dogfish as side work, taking a day’s worth during a short trip for some quick cash or going after them during the winter when more lucrative species aren’t available.  The problem is that the extremely low market value of dogfish meat makes even these short trips seem not worth it.  A pricing structure that reflects the other uses of dogfish (perhaps paying for the skin along with the meat) would make this fishery much more worth the trouble for dogfishermen, and ironically a higher market price could potentially give fishermen incentive to keep the stock healthy.  That said, I’m sure most fish houses wouldn’t be thrilled about paying more for dogfish.

Fishermen target most harvested species for purely economic reasons; cod, flounder, and tuna pay the bills.  However, when it comes to dogfish, the industry still seems to be stuck on the mindset of “They’re eating our bait!  Kill ’em all!” which doesn’t help when managing a slow-growing species vulnerable to overfishing.  The common opinion of spiny dogfish as trash fish and pests is only reinforced by low market prices, and increased quotas that may only lead to another crash are not the best way to go about making this fishery worthwhile for fishermen.  Because dogfish contribute economically with more than just meat, the other uses for dogfish should be factored into the pricing.  This would go a long way in injecting a little more rationality into the decision-making in dogfish management.

Of course, I’m no economist.  I welcome any input as to whether this would even be realistic, and how it could be implemented.