Yesterday I got the chance to wake up before dawn and head down to Morehead City to help out Duke PhD student Meagan Dunphy-Daly in her research on bull sharks and their habits in the Neuse River.  She has a guest post up at the parent blog that summarizes the research and methods pretty thoroughly, but the general idea is that she wants to tag and track adult bull sharks in the Neuse to see if they’re the reason dolphins in the river stick to the shallows (for a general summary of the cowardice of dolphins, check out this old post).  With drumlines, a longline, and more bloody fish chunks than I’ve ever seen outside of a fish house, our adventure began…

The crew was made up of myself (for ballast, mostly), Meagan, and Duke grad students Shelayla and Dani.  We set ten drumlines (no not those drumlines) and alternated the longline set at either end of the drumline spread.  The bait was whatever leftovers Meagan could scrounge out of the fish houses of the Beaufort/Morehead City area, including some species that are pretty tasty when they haven’t been sitting in a cooler with each other for hours.  Three sets were pulled, and a lot of chum was thrown around.

A wide assortment of fish chunks for the sharks, including the pectoral area of a yellowfin tuna and... salmon? 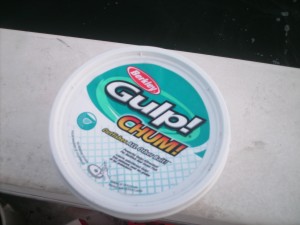 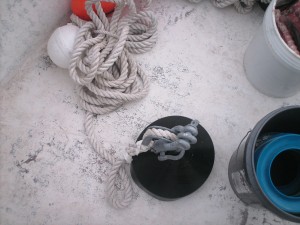 A drum part of the drumline. The hook and line are attached to the weight by a shackle large enough to spin around, letting the shark swim in circles around the weight while it waits for us to pull it up. 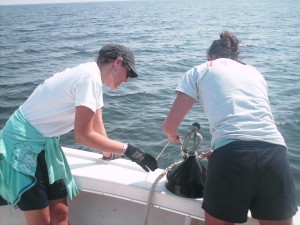 Meagan and Shelayla checking a drumline for sharks. If one of them gets pulled in, we have one on. 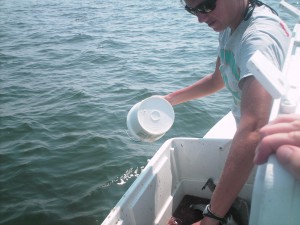 We chummed the last longline set by tossing out the leftover chunks of bait just up-current. Meagan is clearly enjoying the smell. 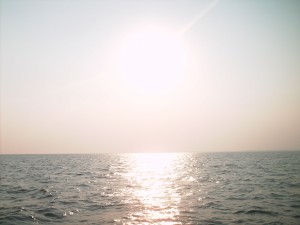 At the very least we got a nice sunset out of the deal.

You’ll notice a distinct lack of shark pictures.  That’s because we got skunked.  Despite our best efforts, we couldn’t even get a cownose ray as bycatch.  In fact, the bait seemed to get suspiciously little attention from scavengers (with the exception of the salmon, which was picked down to bones at the first bait check).  There was also an odd lack of any kind of activity at the surface, with the exception of a small horde of shrimp trawlers that certainly seemed to be catching something.  Ah well, some days the fish just aren’t biting.

Shark or no shark, this is a pretty fun way to fish and I’m hoping to get back out there.  Meagan and company certainly know what they’re doing, and the lack of sharks was not for a lack of effort.  I’m now even more determined to check bull sharks off my list.  Bring it on, Carcharhinus leucas…