Welcome to the first post in 2012.  It’s probably good to start the new year off with a doozy, and in keeping with the theme of this blog, it involves that scrappy little shark everyone loves to hate.  Spiny dogfish are possibly the most well-studied shark species, by virtue of being relatively common and easy to handle, but there is always room to learn something new or revisit something we thought we knew (especially with regards to dogfish ecology).  One of the best-known features of spiny dogfish is its longevity and slow growth, but a new paper by researchers from the University of New Hampshire and the University of New England shows that the specifics of spiny dogfish age and growth are not written in stone.

Determining the age of a fish generally involves finding some hard part of the body that grows incrementally with the fish.  Usually these structures produce growth rings, similar to those on a tree stump.  In bony fish, the otolith is usually used to determine age (and can also be used to find out all kinds of other neat stuff).  Sharks, having cartilaginous skeletons, have very few hard parts that reliably lay down annual growth rings.  Usually the vertebrae are used, but in Squaloid sharks the spines have also been found to lay down growth rings.  But which method works better?

In spiny dogfish, the rear dorsal spine is used for ageing due to being longer and usually in better shape than the spine on the first dorsal fin.  Since spines are external structures, they’re a lot more convenient to get at than vertebrae, but are also exposed to the elements, where growth rings can be obscured by the wear and tear of living in the ocean.  Equations to compensate for spine wear have been developed by researchers working on Pacific spiny dogfish, and the same principles have been applied to the Atlantic species.  The classic paper by Nammack et al. (1985) established the growth curves and determined the ages at maturity for male and female dogfish using a combination of dorsal spines and observations of the reproductive organs.  Nammack et al. (1985) estimated that Atlantic spiny dogfish live to about 40 years and reach a maximum length of 79.9 cm for males and 100.5 cm for females.  These findings have persisted ever since, and this paper remains the main cited source when references dogfish age and growth in the Atlantic.

Around the mid to late-80s, spiny dogfish came under significant fishing pressure and showed signs of population decline by the late 90s.  When fish are subject to intense fishing pressure, the population often shows a response called Lee’s Phenomenon, in which fish apparently mature at younger ages and smaller sizes.  This is the result of selectively removing the slower-growing, larger individuals through fishing and is significant changes in the age and growth schedule are a sign of overfishing.  The most recent growth curve (Nammack et al. 1985) was generated before overfishing of spiny dogfish, there was a need for an updated curve to reflect possible changes.

Bubley et al. (2011) sought to do just that, while also checking to see if dorsal fin spines really are the best way to find out how old a dogfish is.  To do this, they checked age estimates based on vertebral rings against those from dorsal spines.  What they found was that worn dorsal spines tended to overestimate the age of the dogfish in this study, estimating a slightly smaller size at a given age.  This may be a result of the equations used to compensate for dorsal spine wear (the general idea is that larger individuals have more worn-out spines), which may lead to overestimating size at a given age. 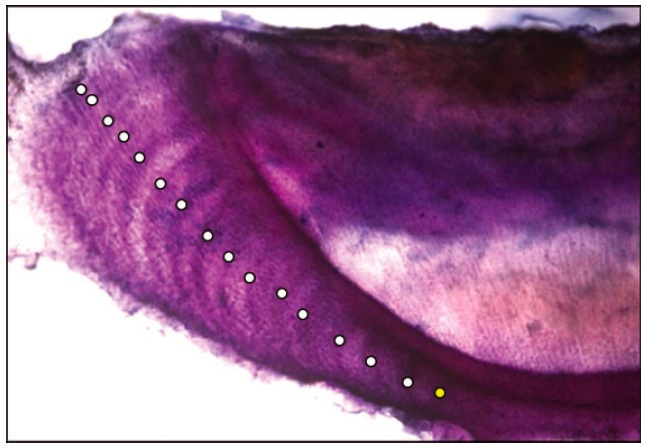 Interestingly, the growth curve generated by Bubley et al. (2011) showed a higher growth rate for spiny dogfish, but only for females.  In the spiny dogfish fishery, females are selectively targeted due to being larger and heavier than the males.  The increased growth rate for females may be a response to the loss of slower-growing individuals to the fishery, and may be evidence of Lee’s Phenomenon, though the authors noted that their study was not designed to determine the cause of any change in growth parameters.  Also, though the maximum size for females was comparable to that found by Nammack et al. (1985), the maximum male size was considerably larger, at 94.23 cm.

So what have we learned from Bubley et al. (2011)?  First, that it’s important to keep your age and growth calculations up to date, especially when dealing with a species subjected to fishing pressure.  Second, make sure the ageing method is the best for the task at hand: spines may be more convenient, but the wear and necessary fudging of the calculation to compensate make them less accurate than vertebrae.  The observed differences in female growth rate and maximum male size may be a result of fishing pressure or may simply be an artifact of the different method, but are certainly worth noting.  With a species like spiny dogfish that requires careful management, you definitely want to make sure you’re not doing it wrong.