One of the cooler trends in marine science has been the revelation that advanced social and learning behavior are pretty widespread among marine animals, and not just the domain of marine mammals.  Stereotypically, whales and dolphins are considered the big-brained residents of the ocean, able to outsmart everything else with their adorable group behavior.  The truth is more complex and therefore a lot more interesting: several marine taxa from bony fish to cephalopods have proven quite smart, and some marine mammals are not so smart (the North Atlantic right whale was considered the “right” whale to hunt, and continues to be critically endangered, because they are spectacularly dumb).  Fortunately for my own particular bias, sharks are following this trend.  A couple newer papers show that not only are sharks highly social, but their social behavior can be just as heartbreaking and heartwarming as that of any charismatic megafauna.

Social behavior doesn’t always ensure victory.  Sometimes you pair up or join a group just to go down in a blaze of glory, Thelma and Louise-style.  This particular story involves some interesting behavior from a bony fish, the Giant Trevally (Caranx ignobilis), a species of jack found in the tropics of the Pacific Ocean.  According to observations made by researchers and fishermen (and reported by McPherson et al. 2012), large adult Trevally just flip out after predation attempts on them by the local sharks, and repeatedly ram their would-be predators until they’re dead.  The fish will ram a point just behind the shark’s pectoral fin that apparently represents a weak spot, eventually causing massive internal damage and death.  In their homicidal (selachicidal?) rage, the jacks will continue ramming much longer than makes any sense for mere self-defense, not allowing the sharks to escape or even stopping when they start taking severe impact damage themselves.  They’ll do this both in groups (fishermen observed a 3 meter/9.8 foot tiger shark get taken out by a mob of jacks) and solo (one Trevally took on two blacktip reef sharks itself).

Hidden in this story of kamikaze fish is a sad example of just how tight the social bonds can be between individual reef sharks.  A pair of blacktip reef sharks found themselves the target of a single Giant Trevally with a grudge, and a two-hour battle ensued.  One shark was smaller than the other, and swam in formation with the larger shark for the entire ordeal, even attempting to intervene and bite the jack while it was ramming the larger shark.  The smaller shark never broke away or left the side of its buddy and stuck through to the bitter end, even though it had at least two opportunities to escape to deeper water while the jack was busy beating up the larger shark.  If that doesn’t bring the slightest hint of a tear to your eye, you must be a Giant Trevally. 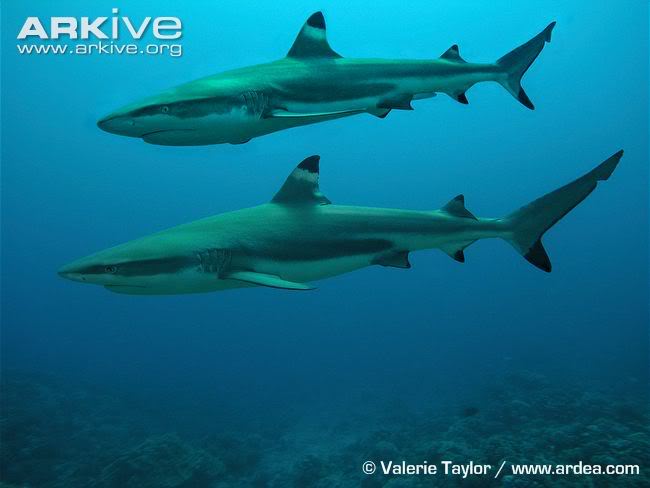 When an animal is literally willing to die with its conspecifics, you’re dealing with some very strong social bonding.  So why do sharks form such strong social bonds?  One theory (brought up in my last post on social behavior) is that female sharks in particular band together to help each other fend off randy males.  However, at least one of the blacktips observed by McPherson et al. (2012) was a male, suggesting that male sharks form strong pair or group bonds as well.

One theory is that some shark species start forming bonds very early in life, and they start grouping up because they’re learning from each other.  Guttridge et al. (2012) tested this in a slick experiment in the idyllic setting of the Bimini Field Station, using the iconic species of that area, the lemon shark.  Lemon sharks are a highly social species, and a paper reviewed in my last behavior post found that young lemons will actively seek out other sharks of the same species to group up with.  For this experiment, the researchers trained some young lemon sharks to bump a target in exchange for food.  They then exposed other, “naive” sharks to either a trained shark or a “sham demonstrator,” or untrained shark.  When the “observer” sharks were given a chance to take their own crack at the puzzle, those that had observed one of the trained sharks had a much easier time figuring out the importance of bumping the target.  In the case of lemon sharks, one of the advantages of grouping behavior may be that less-experienced sharks have an opportunity to learn successful hunting techniques from their friends.  If the idea of baby sharks showing each other the ropes doesn’t warm your heart, you must be a Giant Trevally.

For a group of animals that until the past couple decades were derided as merely “mouths with fins,” sharks are certainly providing plenty of fodder for researchers looking for complex, intriguing behavior.  Whether it evolved as a byproduct of sexual selection or because it provided an edge on the hunt, social behavior has undoubtedly contributed to the comfortable position most sharks have near the top of marine food webs.