A few recent papers in the elasmobranch world have turned some popular assumptions about sharks and rays on their heads.  First and most high-profile was Grubbs et al (2016) dismantling the shark/cownose ray/scallop trophic cascade that not only became so entrenched that it actually ended up in textbooks, it also inspired the “pest control” mentality behind unsustainable hunting and fishing on a long-lived, slow-growing species.  The same week and with considerably less fanfare (though just as significant from a scientific perspective), Frisch et al (2016) found definitive proof that reef sharks, long thought to be apex predators in coral reef ecosystems, are actually mid-level mesopredators occupying more or less the same position in the food web as many of the larger reef fishes like jacks and groupers.  The reason these papers are significant is that they overturn assumptions made about shark and ray ecology that have had pretty significant effects on the policies that manage these species. The problem with those original assumptions is that they were made without actually looking at what was in these animals’ stomachs.

Looking at stomach contents is the most direct way of figuring out what an animal has been eating.  If you find a particular prey species in a shark’s stomach, you now have irrefutable proof that the shark has eaten that species at least once.  The original Myers et al. (2007) paper that proposed the shark/cownose ray/scallop relationship did not actually include any stomach content analysis.  Predator-prey relationships between sharks and cownose rays were inferred basically by showing graphs of shark declines and ray increases next to each other and pointing out that some sharks are big apex predators.  Meanwhile the relationship between cownose rays and bay scallops had more robust support, but it was largely based on experiments with ray-proof enclosures around scallop beds and not directly looking at the cownose ray diet.  In fact, as Grubbs et al (2016) point out, the whole paper more or less gets away with just showing graphs of abundance next to each other without much actual analysis, and almost none of the main conclusions of this very well-known paper actually hold up when compared to hard data.  Studies on stomach contents only show a few of the shark species mentioned by Myers et al. (2007) actually eating any rays at all, and an even smaller handful of true observations of cownose rays in shark stomachs (in fact cobia seem to be more significant cownose ray predators than most sharks).  On the other end of the cascade, the most recent analysis of cownose ray stomach contents by Bade et al. (2014) found no traces of commercially-important bivalves like oysters or scallops in the cownose ray diet.  By taking a good, direct look at the cownose ray diet, researchers were able to show that this animal is not the scapegoat for crashing scallop stocks it’s been made out to be.

Apex predators can be important regulators of their ecosystem (this is a key point in shark conservation efforts), but in many cases sharks have been assumed to be apex predators mostly because they’re large and conspicuous.  The assumption that sharks are always apex predators was directly addressed by Frisch et al (2016), who used a combination of stable isotope and stomach content data to figure out the position of various shark species in the coral reef food web.  What they found was that the most common reef sharks (blacktip, whitetip, and silvertip) were actually mesopredators, kind of the “middle management” of the food web.  This gives them the same ecological role as large fish like groupers and jacks, and means that these fish can take over the predatory role of reef sharks in areas with low shark populations.  They did find that larger species like dusky and tiger sharks do seem to have a true apex predator role on the reef, but not all shark species are equal.  Therefore a lot of the ecosystem-regulating services provided by sharks may actually mostly be the work of a relative handful of the largest, highest trophic level species.  That’s not to say that mesopredator sharks are unimportant: they can take over the prey-controlling duties of large fishes in areas where groupers and snappers have been overfished and vice-versa.  But it may actually only be the largest sharks in the area that actually have that irreplaceable top predator role.

So why all this effort to define ecological roles for sharks without actually looking at the diet directly?  Well, for one thing, stomach contents can be kind of gross. 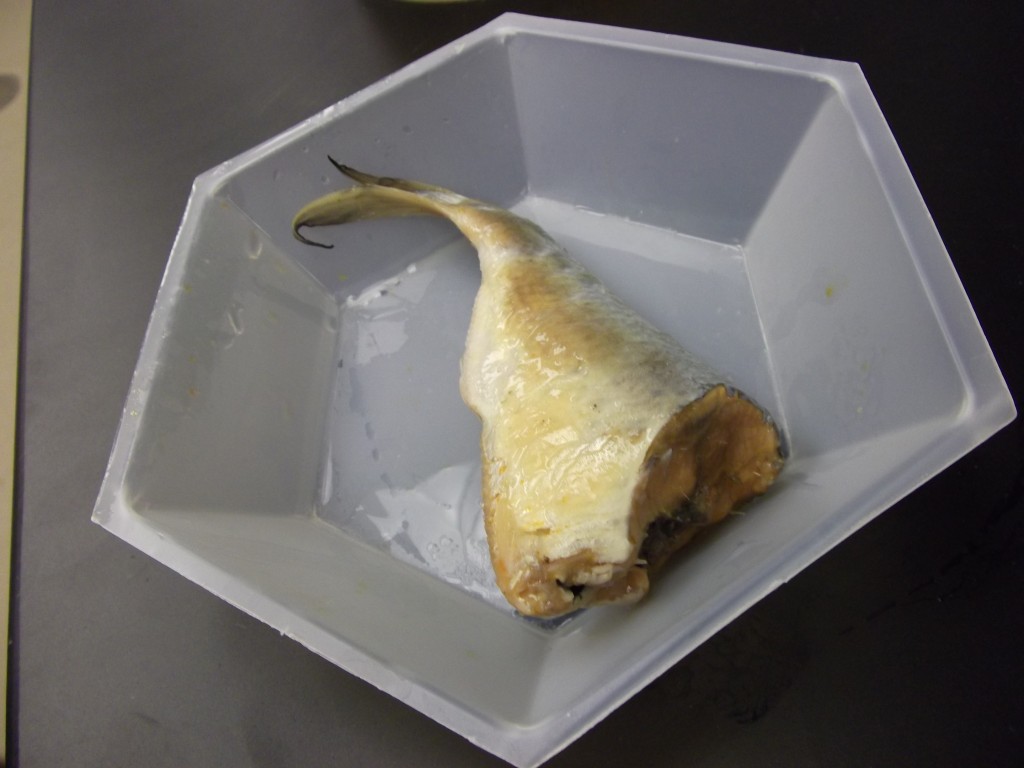 Atlantic menhaden lavaged out of a spiny dogfish shark. Photo by Ben Bangley.

Documenting stomach contents can be a smelly and labor intensive affair, so I can understand why some people would jump at the chance to infer diet by other methods.  Stomach contents analysis also requires physically getting the food out of the stomach, which can be difficult for the larger species.  There is also an assumption that analyzing stomach contents requires sacrificing and cutting open the shark, which is not ideal when your study animal’s populations are declining.

These are all fair points, and alternative methods like stable isotope analysis have gotten more popular in recent years.  Stable isotope analysis involves looking at traces of Carbon-13 and Nitrogen-15 in predator tissues, which can be collected non-lethally and can tell you quite a bit about the long-term diet of the shark.  However, stable isotope analysis is not at the point where prey species can be identified, so while it could tell you that a bull shark has a high trophic level and is feeding mostly in estuaries, it couldn’t tell you for sure that the shark’s stomach is full of cownose rays.

There are ways of collecting stomach contents non-lethally.  Various forms a gastric lavage, essentially pumping the shark’s stomach, have been successfully used on a variety of species, including some larger sharks.  I have a particular bias towards this method because it’s what I used to collect dogfish stomach contents for my Master’s thesis.  Frisch et al (2016) used a variation of this method collect stomach contents from reef sharks, which are considerably larger than spiny dogfish.  So non-lethal stomach content analysis can be done, if you’re willing to stick a tube down a shark’s throat.

Marine conservation works best when it’s informed by the best available science.  Policy shouldn’t be based on looking at charts in a way that tells a nice story without any hard evidence behind it.  This means that if we want to say things about the role of sharks in the ecosystem, we’d better be ready to get elbow-deep in their puke.  It’s not the most glamorous work, but it’s the best information possible for defining predator-prey relationships.