Every so often someone thinks they’re clever and sends me this video.  I’ll not sully this blog by actually embedding it, but here’s the gist: a Pacific giant octopus eats a spiny dogfish.  Usually this is accompanied by something along the lines of “OMG!  Octopus totally pwns shark!”  I usually just brush off the whole octopus vs. shark argument, because frankly I won’t be impressed until I see a Pacific giant octopus take down an eight foot sixgill shark or something else that could legitimately eat it.  Cephalopod fans are totally grasping at straws with this video.  However, one thing does hit me personally: that little bastard is eating my study animal!  Which is why it filled me with glee to find something in one of my sets of gut contents yesterday that I just had to photograph. 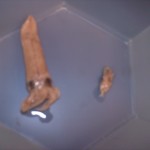 Spiny dogfish eating cephalopods is nothing new, especially the Loligo squid on the left.  That said, let’s zoom in on that little guy on the right… 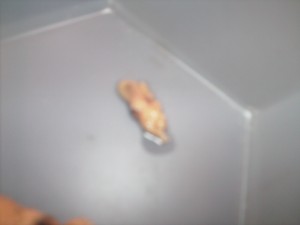 It’s tough to tell thanks to my camera’s complete and utter lack of competence on the macro setting (one day I’ll upgrade), but this particular little cephalopod lacks long grasping tentacles and doesn’t have any fins either.  Which means that this little doe-eyed mollusk is an adorable baby octopus (most likely vulgaris, though if anyone knows of any other octopi that would show up in North Carolina waters please let me know).