In my previous post on the detective work necessary for any good feeding habits analysis, I lamented the apparent lack of a “one-stop shop” for looking up fish scales (at least as far as I’ve been able to find).  In response, I’ve been saving scales from fishes I’ve been albe to ID down to species level.  The idea is to match up these “type” scales with the scales often found with the unclassifiable chunks of fish that often show up in spiny dogfish stomach contents.  Below the jump you’ll find the first three species in Chuck’s Field Guide to Spiny Dogfish Bait. 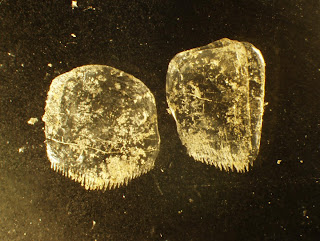 Atlantic menhaden (Brevoortia tyrannus).  I’ve posted before on how tasty these ubiquitous cuplieds seem to be to a dogfish, and it’s not surprising that scales resembling menhaden scales show up with a lot of my unknowns.  Menhaden have a fair amount of variation in the shape of their scales.  Fortunately, I have a lot of menhaden scale samples. 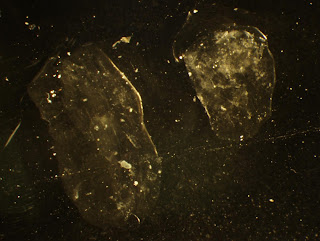 Bay anchovy (Anchoa mitchilli).  These fish show up in the hundreds, usually intact.  Dogfish must just swim through large schools oft these would-be pizza toppings with their mouths open.  So far the highest count in any one stomach has been 253 anchovies, and they weren’t even the only things in the stomach.  Anchovies must pack efficiently.  I’ll need to get a better picture of these scales, since I’m not sure these ones aren’t multiple scales stuck together. 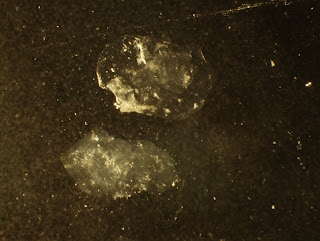 Atlantic croaker (Micropogonias undulatus).  These scales could probably be lighted better, and I’m looking to get more samples of these, because they’re a pretty nondescript scale.  In contrast to the anchovies, there are typically only 1-3 small croaker in any given stomach, and they don’t turn up that often.  Strangely, most of the croaker I’ve found have been in the middle of big clumps of anchovies.