As a lifelong shark lover whose thesis research happens to be on the subject of predation, I’m a little obsessed with the ecology of predation.  Earlier I posted on trophic cascades and debate over whether they are a strong enough interaction to affect fisheries.  What may not be immediately obvious is that a predator doesn’t have to actually eat its prey to affect the prey’s ecology.  Few organisms are oblivious enough to not know that their predators are trying to eat them, and predator-avoidance or defense is a major driver of behavioral evolution.  It’s why herring form schools, lobsters are attracted to shelter, and dolphins flee in terror from large sharks.  And, perhaps most importantly to fisheries management, why certain predators aren’t eating more of their prey we compete with them for. 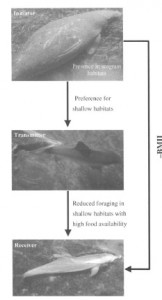 When the threat of predation affects the behavior or the prey organism, this is referred to as a behaviorally-mediated indirect interaction.  Note that the “threat of predation” is distinct from actual, direct predation.  Basically the presence or absence of a predator affects not only the direct mortality of a prey species, but also how it uses its environment.  A tiger shark in the area can make the difference between whether a bottlenose dolphin decides to feed in more fish-rich shallow water or less productive deeper areas that are either less-patrolled by sharks or provide more potential escape routes.  Those fish that would have been preyed upon by the dolphins in the shallow habitats are now essentially protected by the threat of tiger shark predation.

Dill et al. (2003) summarize this theoretically by assigning each species involved a role in the behaviorally-mediated interaction.  The lowest-level prey species is referred to as the Initiator, though this can also be a relatively unrelated prey species that attracts the predator to the area.  In the example in Dill et al. (2003) the Initiator species is the dugong, a preferred prey of tiger sharks that also happens to forage in the same shallow seagrass beds as bottlenose dolphins.  The presence of dugongs attracts tiger sharks, which are classified as the Transmitter, because the presence of tiger sharks “transmits” the threat of predation to any dolphin in the area.  Finally, the Receivers are the dolphins, which avoid the areas frequented by tiger sharks despite those areas being energetically more valuable.  Even though the sharks are not in the area with the express purpose of eating dolphins, they affect the local distribution and foraging habits of the dolphins.

What this all results in is an ecosystem in which certain parts of its ecology are essentially controlled by fear.  This creates this possibility that the removal of predators will create what is called a fear-released system, in which the smaller mesopredators are freed from the oppression of their predators and happily frolic among food sources that were previously avoided because of the fear of being eaten.

Frid et al. (2008) sought to illustrate this by modeling an interaction between harbor seals, Pacific herring, walleye pollock, and Pacific sleeper sharks.  In this model the mesopredator seals had a choice between feeding on herring, which stay near the surface, or pollock, which are typically found near the bottom.  The factor affecting this choice was the presence of sleeper sharks, which in nature occupy many of the same habitats as walleye pollock.  Assuming that each foraging trip nets a seal a single fish, pollock are obviously a better deal from an energetic standpoint.  However, the conundrum is that the better meal also comes with the potential cost of getting devoured by giant deep sea sharks. 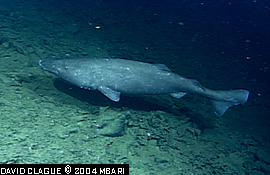 The Pacific sleeper shark, the giant killer dogfish that haunts the nightmares of harbor seals. From marinebio.org.

The Pacific sleeper shark (Somniosus pacificus) is an interesting choice for the top predator in this model, mainly because it isn’t as well-known a seal-eater as more shallow-living sharks like the great white.  It does reach great white-like proportions, and like it’s close relatives the Greenland shark and Southern sleeper shark is an apex predator in deep sea and cold water environments.  As a member of the Squaliformes it is also a relatively close relative of the spiny dogfish.  Despite its sluggish habits and deep habitat, the stomach contents of sleeper sharks frequently include fresh seals.  It is thought that sleeper sharks ambush seals as they make deep dives for demersal fish like pollock, which makes these sharks a good fit for this model.

What Frid et al. (2008) found in their simulations was that in the presence of sharks, seals would limit deep dives for pollock despite what the authors colorfully referred to as the “hazard pay” of higher-quality prey.  In the absence of sharks seals foraged almost exclusively in mid- and deep water and consumed significantly more pollock than herring.  The initial energy state (a proxy for hunger level) of the seals was also modified to determine if the energetic needs of the seals might cause them to take greater foraging risks.  Though more deep dives were attempted by hungry seals, herring were still consumed significantly more in the presence of sharks, and the seals did at least half of their foraging in midwater or at the surface.  According to these results, the intimidation factor of the sharks determined not only where the seals foraged, but which available prey species they consumed.  What this theoretically means to fisheries managers is that if you’re trying to keep the numbers of pollock up, you could do worse than to have a bunch of sleeper sharks around acting as inadvertent guard dogs (guard dogfish?).

Of course modeling is not necessarily 100% indicative of real-world results and the North Pacific ecosystem is more complex than four species.  That said, the Frid et al. (2008) model clearly demonstrates that fear of predation can significantly impact what resources are utilized by a mesopredator.  Though difficult to quantify and show experimentally, indirect predatory interactions like the fear-based system shown here may actually have just as large an ecological influence as direct predation.